As an earlier report had suggested, Spotify today announced it will integrate the live audio capabilities from its companion app, Spotify Greenroom, within the main Spotify streaming app. Greenroom will also rebrand as “Spotify Live” as part of these changes. At launch, Spotify’s main app will only feature live content from select original programming, while the standalone Spotify Live app will continue to allow independent creators to go live.

While both apps will now feature live content, there will be some differences, the company told TechCrunch.

Spotify Live will continue to work as Greenroom did, by allowing creators to interact with their audience in real time and serve as a creation mechanism for hosts. But live listening in the main Spotify app will not support the interactive features, like audience questions. Instead, it offers the ability for creators to reach a broader audience of Spotify’s 406 million global listeners.

For the time being, only Spotify’s own original programming will livestream in the main app, the company noted.

Spotify acquired the app that would become Greenroom in March 2021 with its $62 million purchase of the startup Betty Labs. Originally known as Locker Room, the app had focused on live audio’s intersection with sports content. Spotify quickly rebranded and rethemed the app, then introduced it as Greenroom in June 2021. By the fall, the company was rolling out live weekly shows to Greenroom that capitalized on Spotify’s existing playlists and popular programming, in the hopes of driving consumer adoption of its live audio service. It also inked exclusive live audio deals, such as the one with Complex Networks.

But Greenroom failed to gain traction in a market that was already moving on from the live audio trend.

According to data from app intelligent firm Sensor Tower, Greenroom gained 275,000 downloads globally, post-acquisition, on Apple’s App Store. Including the time it was known as Locker Room, it had seen a total of 295,000 iOS installs, the firm noted. In other words, roughly 93% of the app’s lifetime installs on iOS were driven by Spotify. On Android, the app is still in Early Access, but the Play Store notes it’s topped 500,000 installs. Combined with iOS, that means the app has at least 775,000 installs. But considering Spotify has hundreds of millions of listeners, it indicates very few users, percentage-wise, tried out Greenroom. (Spotify declined to share its own figures for Greenroom adoption.)

Spotify’s entry into the live audio market had initially seemed a natural fit for the company, which had been heavily investing in podcasts and related technology in recent years, including podcast creator platform Anchor. Meanwhile, the pandemic had driven increased usage of new audio streaming apps, like Clubhouse and others, where creators could hop on at any time to livestream shows to audiences or engage in audio-based social networking. There was an obvious use case for Spotify where podcast creators had established fan bases who would likely want to audio chat with hosts in real time.

But as pandemic lockdown measures and mask mandates tapered off and real-world live events returned, consumer adoption of standalone audio apps like Clubhouse declined in key markets, including the U.S.

Spotify’s app may have also struggled due to its branding. “Greenroom,” implies a place you’d hang out before a show or event, but the app was meant to actually feature the live shows themselves — not just a backchannel to them. The name change to Spotify Live makes much more sense.

As Spotify tells us, the new name “will allow for better discoverability.” Presumably, that includes the App Store, where an app’s title matters when it comes to search result rankings.

Spotify says it will kick off the new live audio content in the main app by highlighting top creators through live events and shows. This will begin today with a live edition of “Off the Record with DJ Akademiks” which, like the other live shows, can be found on the creator’s artist page in the app. If you want to just listen live, you can stream the show from the Spotify app. But if you want to also comment and interact with other listeners in real time, you can switch to Spotify Live.

Other upcoming live shows include the following: 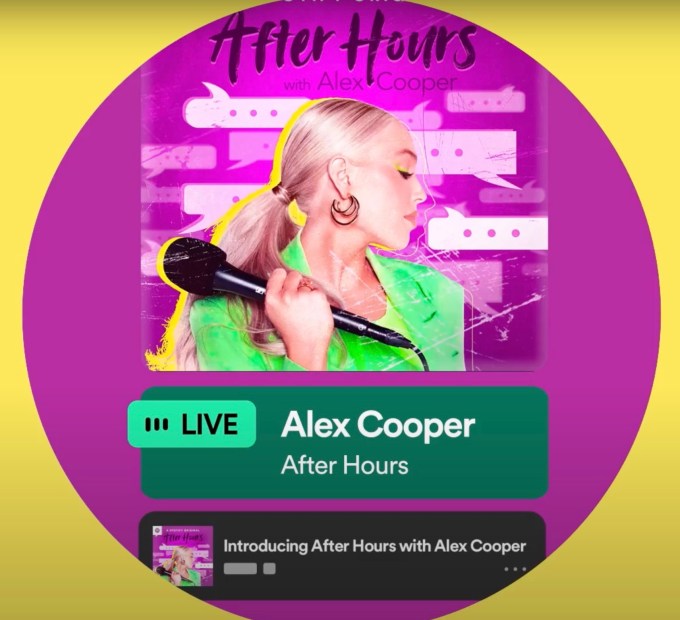 Spotify says its lineup of existing live shows will also now air in the Spotify app, including:

In total, Spotify has more than 50 distinct shows slated to go live on Spotify following the launch, some that are one-time events and others that are recurring or limited series. The company will also continue to develop new shows in the future.

Spotify will also introduce a new “hub” within its app that will feature the upcoming livestreams for easy access. 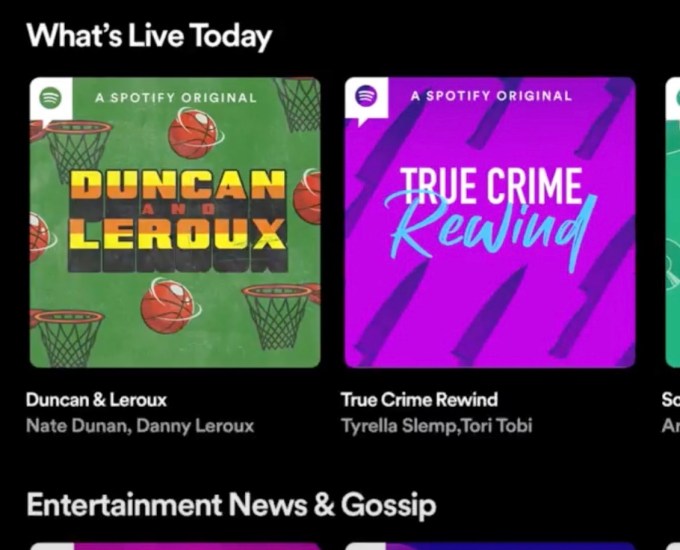 The integration of live content in Spotify’s flagship streaming app is arguably a better idea for capitalizing on creators’ existing fan bases than siloing live shows in a separate app experience. It also mirrors the live audio products that have found some success, like Twitter Spaces, which lives within the main Twitter app but always shows to be recorded for later release as podcasts.

While Spotify notes that the live shows will focus on its original programming, it’s not controlling whether those are later turned into shows for on-demand listening. That will ultimately come down to the content type and creators’ wishes, the company told us. And Spotify hasn’t yet determined if it will ever bring the interactive features of Spotify Live to the main app.

The new live shows are rolling out starting today to Spotify users worldwide.