Hawkins comes to New York City on May 7 in a new “Stranger Things: Experience,” via a partnership with Netflix and Fever. Developed exclusively with the show’s creators, guests are sent “into a parallel universe where they must unlock their secret powers to face the gauntlet of lurking terrors and help save the town,” according to an announcement.

Located at The Duggal Greenhouse in the Brooklyn Navy Yard, this immersive adventure brings fans into recognizable film sets such as the Hawkins Plaza and the Hawkins Lab, which will have the “occasional testing, analysis, or psych evaluation. Don’t worry it’s safe… perfectly safe…” says the official website. Other locations that fans can explore include the Palace Arcade and the Upside Down (watch out for the Demogorgons!).

Along with tons of nostalgic, fan-favorite moments, there will be photo ops, delicious “Stranger Things” food (including a USS Butterscotch sundae at Scoops Ahoy) and drinks (yes, alcohol is available), the ability to interact with performers, and even a “Stranger Things” bar that can be found within the Mix-Tape Arena portion of the trip.

The experience will last an hour and there will be an opportunity to buy merchandise, depending on how much money you have left (the pop-up store in Times Square had some pricey items).

Some warnings about the event:

The rift is open and we’re excited that our Stranger Things fans will get to jump into the magic once more. This time they will take on the challenges themselves and work alongside Eleven, Mike, and the rest of the gang to fight the evil monsters plaguing Hawkins. As Dustin would say, you always say we should never stop being curious, to always open any curiosity door we find.

Outside of NYC, the new “Stranger Things: Experience” will also open in San Francisco and other cities around the world later in the year.

While the first round in December immediately sold out, tickets are available for sale until July 17 at $54 per person, so grab them while you can. You can book them here.

Tickets can be purchased as a single ticket or as a family (minimum purchase of four tickets and there can only be two adults) along with a group bundle (minimum purchase of eight tickets). VIP tickets come with a special Stranger Things gift, a first drink on the house and front-of-the-line treatment (sounds worth it to me). 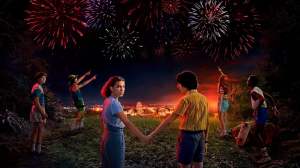 “Stranger Things” is undoubtedly one of Netflix’s most popular shows, with a fan following rapidly growing since 2016 that has influenced some of the very first Netflix games (“Stranger Things: 1984,” “Stranger Things 3: The Game”) that launched in November 2021.

The streamer’s huge growth in subscribers is partially thanks to the series, created by the twin Duffer brothers, Matt and Ross. Who knew a bunch of nosey children encountering dangerous alien species would result in tons of Halloween Eleven character costumes and worldwide recognition?

The flagship show changed the course of Netflix’s history as it witnessed an impressive spike in viewership. The third season reached a record 26.4 million U.S. viewers within the first four days of its release. Over the season’s debut weekend, 40.7 million global household accounts watched the 80s inspired series.

This new “Stranger Things: Experience” follows the “Stranger Things Drive-Into” experience that occurred in Los Angeles last year. This event sold out every day for over seven months with more than 300,000 guests in total. It’s no surprise Netflix is doing this again, ahead of the Season 4 premiere on May 27.