Spotify’s $90 in-car entertainment system “Car Thing,” which went on sale to the general public in February, is gaining a number of new features. The company announced today it would add one of users’ most-requested features — the ability to add songs and podcasts to a queue — alongside other updates involving voice commands, playlists, responding to phone calls, and controlling other media.

The music streaming system is meant to offer consumers an option to more easily listen to Spotify while in the car if they don’t already have a built-in media and entertainment system, or a vehicle that supports Android Auto or Apple’s CarPlay. Or it could be used with those other systems if people just happened to prefer Car Thing’s interface.

As Car Thing already connects to the vehicle via USB, Bluetooth, and an auxiliary cable in order to stream Spotify from the driver’s phone, it makes sense to allow the device to work with other phone functions, too.

Spotify says device owners will now be able to see incoming calls and dismiss or answer them through the Car Thing interface. They’ll also be able to play and control other media in the car using the device, then switch back to Spotify using either presets, voice commands or by tapping the screen. 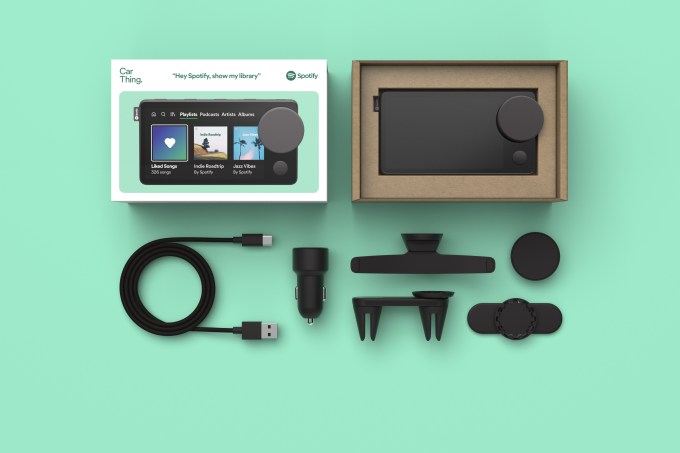 Another update will bring the requested “add to queue” functionality.

There are a number of ways to use this feature, Spotify noted. Car Thing users can either tap “add to queue” icon next to a track in their tracklist; use the device’s dial to highlight the track, then press and hold to add it to the queue; or use voice commands (e.g., “Hey Spotify, queue [song name]”). Users can also view the queue at any time by saying “Hey Spotify, open my queue,” or by pressing and holding the dial while in the “Now Playing” view.

The company additionally updated Car Thing’s set of voice commands to allow device owners to request personalized playlists by mood, genre, or activity. Spotify already offers a number of regularly updated personalized playlists in its app, but now users can say things like “Hey Spotify, play cozy Sunday RnB,” and the app will generate a playlist based on the user’s request.

Spotify had been working to enter the device market for some time before this year’s public launch of Car Thing.

It first began hardware experiments in 2019, before ultimately settling on the current design that became the new Car Thing. During this period, the device’s hardware and industrial design evolved from a smaller item plugged into the car’s cigarette lighter to a more consumer-friendly product with a big knob, colorful touchscreen, voice control features, and more. Car Thing, so far, has been fairly well-received. Spotify said over 2 million consumers signed up on the waitlist to purchase within a matter of months after Spotify announced the product. It has not yet said how many have sold, however.

At launch, Spotify said the device would soon gain some small software updates, including a “Night Mode” and this “Add to Queue” voice command, among other things, so not all of today’s additions are a surprise.

The new features will begin rolling out to Car Thing owners today.