Jüsto, the Mexico City-based online grocer, continues to run on all cylinders with a goal of saturating the Latin American market.

The company claims to be the first supermarket in Mexico with no physical store that enables customers to buy groceries directly from its website, or an app, and Jüsto will deliver the order to the customer’s location of choice.

We previously reported on the company last February when it raised $65 million in a Series A round led by General Atlantic. At that time, CEO Ricardo Weder told TechCrunch that the company, which was founded in 2019, weathered the first year of the global pandemic well, seeing 2020 revenue increase 16-fold.

Weder planned on using the Series A funding to expand across Mexico and Latin America — a market he told me represents a $600 billion opportunity — and that’s just what the company did.

“The global pandemic helped a lot in terms of grocery adoption in Latin America,” he added. “Before, it was 1% and now it is 3% and growing aggressively.”

Those few percentage points of adoption helped Jüsto go “gangbusters,” growing five times in Mexico and achieving a 99.4% fulfillment rate over the past 12 months. It now has more than 100,000 users in each of its markets, and Weder forecasts being in the millions by year end.

It entered the Peruvian market late last year after acquiring local e-grocer Freshmart and has since announced the opening of its first physical store in Lima to offer a hybrid grocery model. It also launched Ekonofresh, a discount online supermarket that complements its Freshmart offering to provide even more choice for customers there. 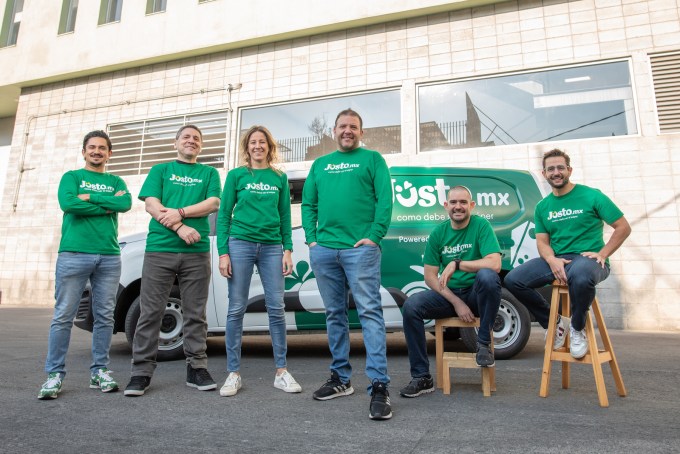 The company also launched in Brazil last October in São Paulo and has seen steady growth of between 30% and 40% month over month, and the region already represents 25% of Jüsto’s total revenue, Weder said. There are now plans to expand into other cities, including Belo Horizonte, Rio de Janeiro, Porto Alegre and Curitiba. Weder anticipates being able to move into 20 additional cities in the next several years.

That further expansion is backed by a new round of funding, this time $152 million in Series B funding, again led by General Atlantic. New and existing investors, including Tarsadia Capital, Citius, Arago Capital, Foundation Capital and Quiet Capital also participated in the round to bring Jüsto’s total venture capital investment to date to over $250 million.

“Right now, we believe we have a mature value proposition, especially as our operations expand aggressively and we improve the technology to scale up operations,” Weder said. “We are the leading grocer in Latin America, and we see the biggest companies, like Walmart, as competitors, so there are still things we can do to increase our share. Mainly grocery stores are focusing on infrastructure, and Jüsto is pursuing that also.”

Weder also has his eye on Colombia and Chile and is looking strategically at when the right moment is to move into those countries, either directly or via acquisitions like Jüsto did in Peru.

The company has amassed between 7,000 and 8,000 SKUs with its main categories being fruits, vegetables, proteins and cleaning products. That is up about 2,000 SKUs from last year depending on the city.

Up next, Jüsto is focused on continuing the personalization of its products in each city. It is also developing its relationships with small and medium farmers to buy from them directly as the company continues its focus on sustainability and reducing waste.

Meanwhile, the online grocery industry in the U.S. is poised to be a $187.7 billion industry by 2024, up from $95.8 billion in 2020. Delivery is dominated by incumbents like Walmart, Instacart and DoorDash, and delivery startups around the world are seeing success as well as in raising venture capital.

For example, Rino recently took in $3 million to deliver groceries in Vietnam, Bokksu is now valued at $100 million after raising $22 million, JOKR and Gorillas have billion-dollar valuations — in Gorillas’ case billions — while Egypt’s Breadfast and Appetito and India’s Zepto also brought in funding in the past six months.

It’s clear that there are a lot of movers and shakers in this industry, but grocery delivery is also a challenging industry. Last month, BayArea Inno reported that Zero Grocery shut down just a month after I reported they raised $12 million. In a Facebook post, the company stated “Fundraising has always been the biggest battle we have faced. Unfortunately, it’s the battle we’ve lost.”

Weder, too, noted that grocery delivery was “not easy, especially on the operational side,” made even more challenging as a company grows. That’s one of the reasons Jüsto has focused on the full basket approach with the goal of people doing all of their shopping via the company rather than just a few convenience items, he added.

Zeev Thepris, vice president at General Atlantic, concurred, saying that he has seen both the quick commerce and full basket models in Latin America, and while delivery is hard to set up, he finds the full basket method is a better way to get to unit economics that are sound.

“It’s not about convenience, but about people purchasing once a week with an order ticket that is $100 to $150 versus $15 to $20 for those convenience purchases,” Thepris added. “That is what makes unit economics work.”