If you’re looking to integrate video or audio calls into your product, you don’t necessarily have to build it out from the ground up. Unless you’ve got some super-specific needs, there are SDKs that can help with much of the heavy lifting if your budget allows.

One such SDK is Dyte, which announced this week that it has raised an $11.6 million seed round. Pitching itself as the “most developer-friendly” option, Dyte focuses on a handful of key points: fast integration, simple but flexible customization, and expandability by way of real-time interactive plugins.

That last bit is one that seems particularly neat. In addition to the video/audio calling SDK, they’ve built out a secondary SDK for building interactive experiences on top of those calls. Some of the examples they showed me were things like a shared web browser, a collaborative whiteboard, basic turn-based games, and a built-in file viewer where one person can talk while another, say, navigates slides (without either having to share their screen — just upload the slideshow file itself.) These Javascript-based plugins have access to metadata like each user’s role — so you could, for example, make it so that only designated users can control the file viewer, or make a game where the call host can see things the players can’t.

On the more user-facing side, Dyte offers up much of what you’d expect of a video chatting platform: different view layouts, chat and polls, screensharing, background removal/swapping tools, etc. 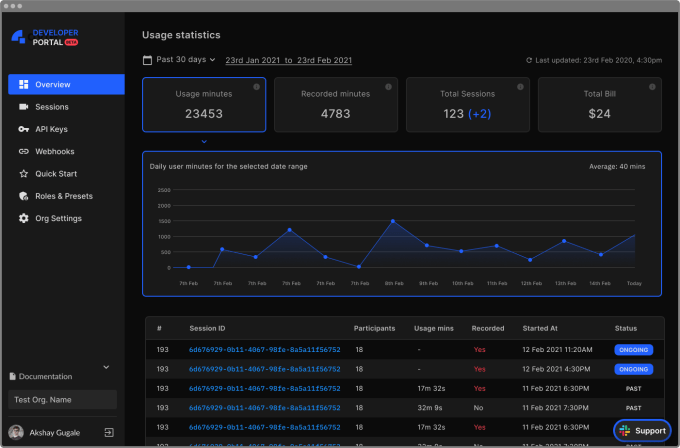 Behind the scenes, they’ve made customization about as simple as can be. On a video chat with Dyte co-founder Abhishek Kankani (hosted on Dyte itself, of course), Kankani had a TechCrunch-themed chat interface (complete with TC branding and lots of green) up and running in just a few minutes. This same customizer let him control which of those aforementioned plugins appeared to users, change the look of the overall interface and which features appeared, and control user roles.

Kankani tells me they’ve built everything with developers in mind because the co-founders themselves are lifelong devs; the team prides itself on its documentation and “super fast” implementation.

“We’ve been coding for the longest time, right?” says Kankani. “I’ve been coding since the fifth grade. My fellow co-founders … probably [longer] than that. So we understand the challenges that you face as a developer when you use a product, and we made a product that we would want to use.”

Dyte charges per user, per month based on how many minutes a team is using, with the first 10,000 minutes per month currently free. Optional things like letting users record calls to the cloud or broadcasting calls to other platforms over RTMP (think live event broadcasting) bump that price up a bit more. 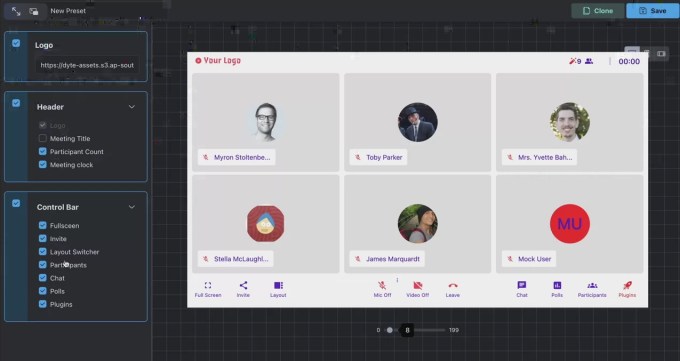 Kankani tells me that this round was backed by Unbound, Surge (Sequoia Capital India’s early-stage initiative), Nexus Venture Partners, and a handful of angels including Product Hunt founder Ryan Hoover and Postman founder Abhinav Asthana.