There is an obnoxious amount of streaming content these days. Ninety-three percent of Americans plan on either increasing their paid streaming services or making no change to their existing plans, according to Nielsen’s newly released State of Play report. Despite this, nearly half of survey respondents complain that there are too many options.

The State of Play report pulls Nielsen TV measurement and streaming data as well as insights from Nielsen’s Gracenote and data from an online custom survey of U.S. streamers.

Interestingly enough, over the last three years, there was an 18% spike in all available video content as well. In addition, 18% of Americans are now paying for four streaming services, whereas in 2019, only 7% subscribed to the same amount.

Due to this nearly 20% increase in unique program titles, 46% of audiences believe that the number of platforms makes it difficult to find what they’re looking for. Moreover, per a Horowitz Research report, about half of the survey respondents said it is hard to know which shows are on services. 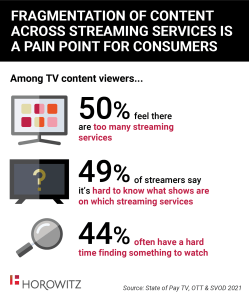 It’s not hard to believe that viewers are seemingly overwhelmed by the substantial number of streaming services. In only a few years, the industry has seen the launch of Disney+, Apple TV+, HBO Max, Peacock, BET+, and Discovery+, as well as the rebranding and relaunching of CBS All Access into Paramount+, and the entrance of DIRECTV STREAM, the latest iteration of AT&T TV.

Streaming video is an easy concept in hindsight but having to choose from thousands upon thousands of shows and movies takes away the simplicity and convenience that is at-home entertainment. Especially if users are constantly exiting and entering new apps and platforms to find one specific title.

Additionally, findings from Nielsen’s State of Play report show that viewers now have a surplus of over 817,000 unique program titles as of February 2022 compared with the over 646,000 in 2019.

“The inaugural State of Play really underscores the fact that we’ve entered the next phase of streaming, based on the trends we have been detailing about streaming over the past few years,” stated Brian Fuhrer, SVP, Product Strategy, Nielsen.

“We’ve moved from infancy into adolescence and all the complexities that one would expect at that point,” he added. “It’s not just that streaming is increasing year over year. Now consumers want access simplified, and the explosion of services has renewed discussions around bundling and aggregation. Ultimately, these challenges signal an opportunity as the industry harnesses streaming for long-term business growth.”

When asked about whether bundles make it easier for consumers to find the content they are seeking, 64% of respondents had a desire for a bundled video streaming service that would allow them to choose as few or as many videos streaming services as they wanted.

Verizon’s Plus Play combines various services such as Netflix, Disney+, Peloton, A+E Networks, Duolingo, Calm, Discovery+, AMC Plus, Hulu, The Athletic, among others, into a single hub where users can manage and personalize their subscriptions all in one place.

Then there are other bundles such as the Disney+/Hulu Live TV/ESPN+ bundle, and Showtime and Paramount+, which were the most recent to bundle.

As the streaming world faces a more congested landscape, streamers are trying everything they can to branch out and get noticed by users. On top of bundling, companies are exploring new markets and features such as live sports and ad-supported tiers. Disney+, for example, has confirmed that it will have a cheaper, ad-supported plan for its subscribers.

Improving user experience, aggregation, bundling, inexpensive ad-supported tiers, and personalization all contribute to happier audiences. While the landscape may be evolving, it has become unwieldy.

Audiences need and desire a one-stop-shop for all the entertainment that matters to them specifically. In a perfect world, multiple services can be personalized to the user and allow them to go from one service to another and be able to find what they like every time.

Needless to say, a unified experience across content distribution will be a seamless and frictionless solution overall.