Mobile apps have become part of the bedrock of how the world at large gets things done and spends a lot of its leisure time, so it’s no surprise that the development of them has become increasingly democratized, too. Now, one of the startups that has created a platform to make it easier to build mobile apps is announcing some funding to continue its expansion after passing 3 million consumer and business users and more than 6 million apps developed on its platform.

Thunkable, which provides a set of “no-code” tools — no coding or developer skills required — to develop apps, has raised $30 million in a Series B round of funding. The money is coming from an interesting group of investors: edtech specialist Owl Ventures led the round, with also had participation from previous backers Lightspeed Venture Partners, NEA and PJC; the DJ Diplo; Sky9 Capital and others that are not being disclosed. The startup has raised $41 million to date, including an earlier round when it was part of Y Combinator.

There are a number of apps out there (and more being built) to build mobile apps without the need for coding expertise. They include modesly funded efforts like FlutterFlow and AppyPie, Builder (more VC muscle here: it raised $100 million just last week), Universe (also VC backed), Kooply (still in stealth and focused on gaming) and many more. Even the likes of Amazon want to get in on the game. Thunkable however thinks it’s cracked the code, so to speak, on this challenge.

“We believe we’ve built the simplest tool for anyone to build mobile apps,” Arun Saigal, the CEO, said in an interview.

To that end, it plans to use the investment in a few different areas to expand on that belief. They include the development of more of its own tools to build Android and iOS apps; a wider marketplace so that third-party creators can also add their own templates and other tools to the mix; and a bigger push to cater to a wave of businesses and enterprises that have been turning more recently to Thunkable for their internal and customer-facing mobile app needs.

No-code and low-code tools have played a significant role in the last several years in making tech — and specifically the ability to create customized tech tools — accessible to more people beyond those with specialist training. But Thunkable is not a startup riding on the coattails of a trend: co-founders Saigal and WeiHua Li (the CTO) are veterans and pioneers of the no-code concept as applied to mobile apps.

The pair first came up with the idea for the startup a decade ago, when they were at MIT working on the App Inventor Project, breaking new ground around how to design visual, intuitive interfaces so that people with no coding skills could still create apps for smartphones and tablets.

“We wanted to bring the community of passive consumers of apps into the world of active creators,” Saigal said in an interview. 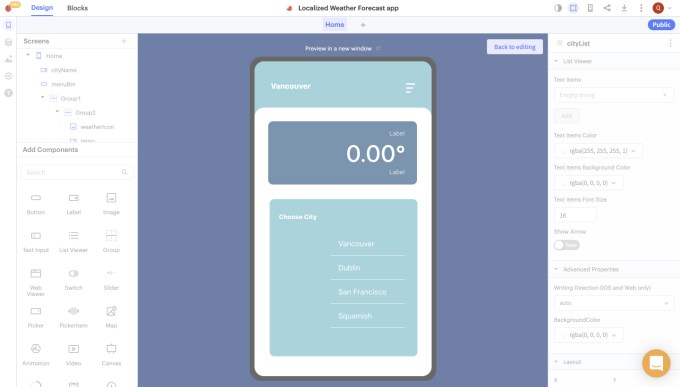 Thunkable leans heavily on the concept of blocks and simply-worded commands that you can bring together in a drag-and-drop interface to build different functions and the overall design of the app. Its approach is to provide tools that are easy to use in their simplest form but for those who want or need it can be expanded in complexity (by way of more options) to become more functional.

Saigal said that its initial focus was on consumers, which in itself is another big concept of the moment, that of the creator economy and users — not professional publishers and others — creating the content that the mass market is consuming.

B2C games, he said, saw early traction, and while consumers still form the majority of its 3 million users, it’s been seeing a significant surge from the B2B sector. That includes smaller businesses that might not have the human capital in-house or budget resources to bring in outside developers but need mobile apps for their teams or customers. But surprisingly, even larger enterprises that want to bring more of the development closer into the teams needing the apps have been turning to Thunkable, with some 40% of the Fortune 500 now listed among the startup’s customers.

“Marketing and logistics, apps for those not sitting at desks,” are among some of the most popular kinds of apps being created by the latter category of users, Saigal said.

The list of investors in this round speaks both to how Thunkable has been aiming its services to date, and also the market potential that investors see in the company. Being hatched out of MIT with an ethos of making computing and coding more accessible to the masses has meant that Thunkable has also been adopted in computer science courses, both in K-12 environments and in further/continuing education. That was part of the appeal for Owl, Saigal noted.

“We are very excited to partner with the Thunkable team because they have created a truly comprehensive and robust no-code platform that can empower a wide variety of institutions and individuals to turn their ideas into custom native mobile apps,” said Amit Patel, MD at Owl Ventures, in a statement. “From students learning computer science concepts to enterprises empowering employees to accelerate innovation, Thunkable is making app creation more accessible in a world where the majority of web traffic is coming from mobile devices and mobile apps are expected to play an even more critical role in global online activity.”

Diplo, Saigal said, came to backing Thunkable as part of his bigger interest in tech that appeals to the masses, and “apps are cool” was how he characterized the DJ’s engagement. His portfolio has also included the banking app Dave, the sneaker community SoleSavy, HiFi (a “financial rights organization” for the music industry), and reportedly he’s also tried to back music-making platform Ableton.