Companies are scrambling to participate in the crypto ecosystem, but many of the tools available for them to use are disjointed and not user-friendly, especially for those new to web3.

New York-based Starlight aims to simplify the process for onboarding companies into crypto. Its product allows companies to set up a crypto wallet and track and manage their digital assets on an ongoing basis, all in one place, co-founder and CEO Grey Nguyen told TechCrunch.

Nguyen and co-founder Ben Yang, now CTO at Starlight, left jobs at other tech companies to participate in a fellowship for pre-seed founders hosted by South Park Commons last year. The pair wanted to pursue a venture in the web3 space, and went through about 20 different ideas in that realm before they decided to work on a business providing tools for DAOs (decentralized autonomous organizations). They quickly realized the market for DAO tools was overcrowded with lots of nascent solutions. More importantly, they felt they were still so early to the space that the DAOs they sought out as customers were still working through fundamental internal questions and weren’t ready to commit to using a particular product, Nguyen said. 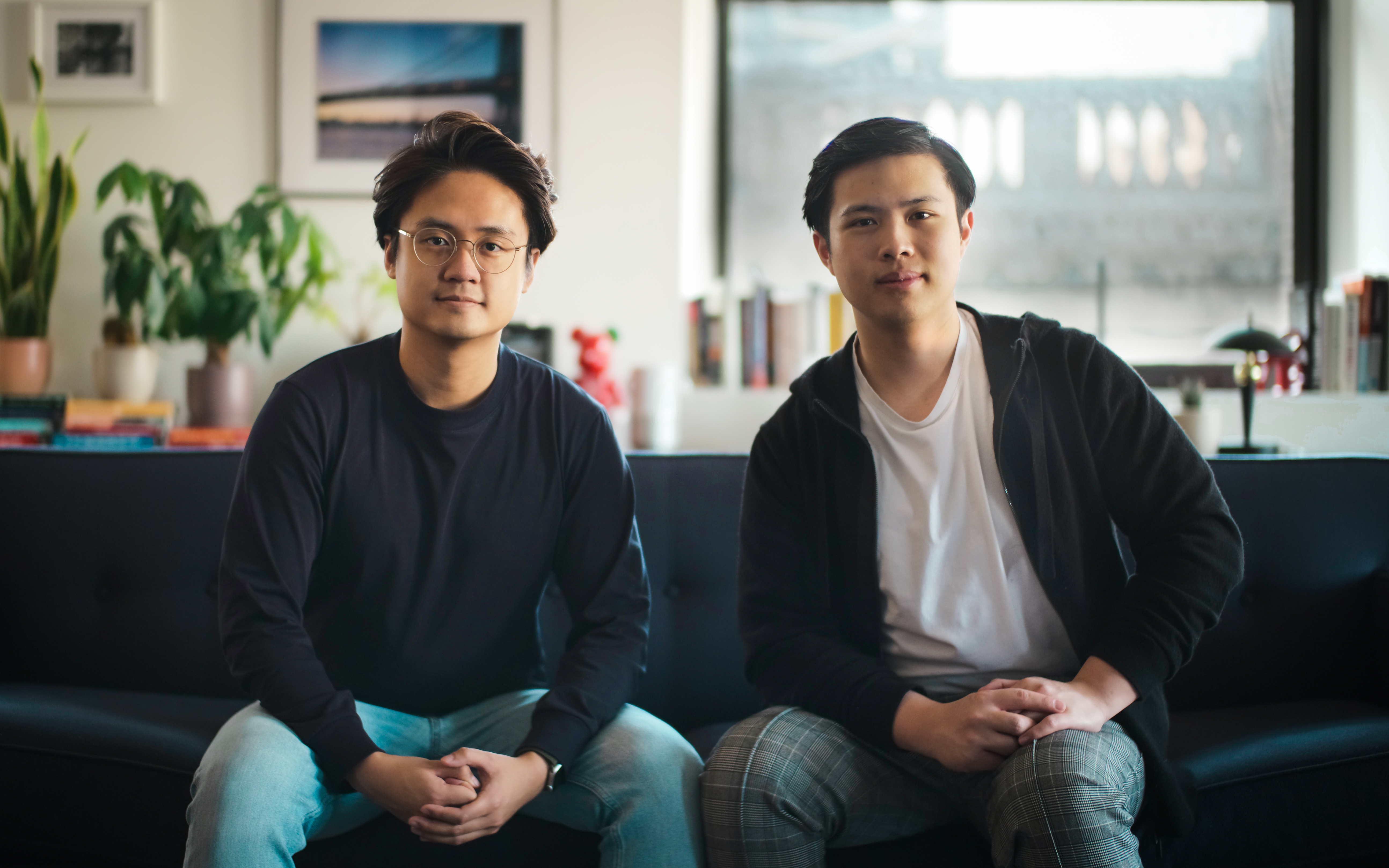 All the challenges they faced trying to launch this DAO tooling venture revealed a much greater opportunity for Nguyen and Yang as they attempted to manage their startup’s expenses, many of which were incurred in cryptocurrency.

“It was then that we realized, this whole time, we had this problem of needing some crypto for our company, right? We needed to deploy things on the mainnet, pay for services, pay our people, and we had this difficult problem with needing to convert our dollars in a bank account into crypto,” Nguyen said.

They tried to get on board with “every major exchange” in crypto, including Coinbase, Gemini, and Kraken, to establish a wallet and manage their spending — but oftentimes, onboarding onto these platforms can take months, Nguyen said. He and Yang asked other companies in the space what solutions they used, and found that the most popular options were to either wait to get onboarded by a big exchange, regardless of how long it took, or for founders to use their own personal wallets to manage their companies’ crypto and take reimbursements after the fact.

When they couldn’t find a solution that would get them up and running with their own wallet in one or two days, they were in disbelief, Nguyen said. They decided to put the DAO tooling project on hold and build the solution they needed instead, which Nguyen described as similar to corporate card and spend management startups Ramp, Brex, and Mercury, but specifically for crypto.

There aren’t a lot of players offering a comprehensive corporate spend management platform for crypto in one place, but other startups have built tools focused on specific areas under the corporate expense umbrella. Sprout and Bitwage, for example, help companies navigate compensating their employees in crypto, while startups such as Paysail enable businesses to make cross-border B2B payments in crypto.

Starlight’s core customers are companies who need to convert some of their cash into crypto, many of which are digitally native but new to web3, Nguyen said. He added that Starlight has also seen interest in its product from crypto-native entities, including DAOs, which often invest in other companies, creating a need for them to convert cash into crypto and vice versa. 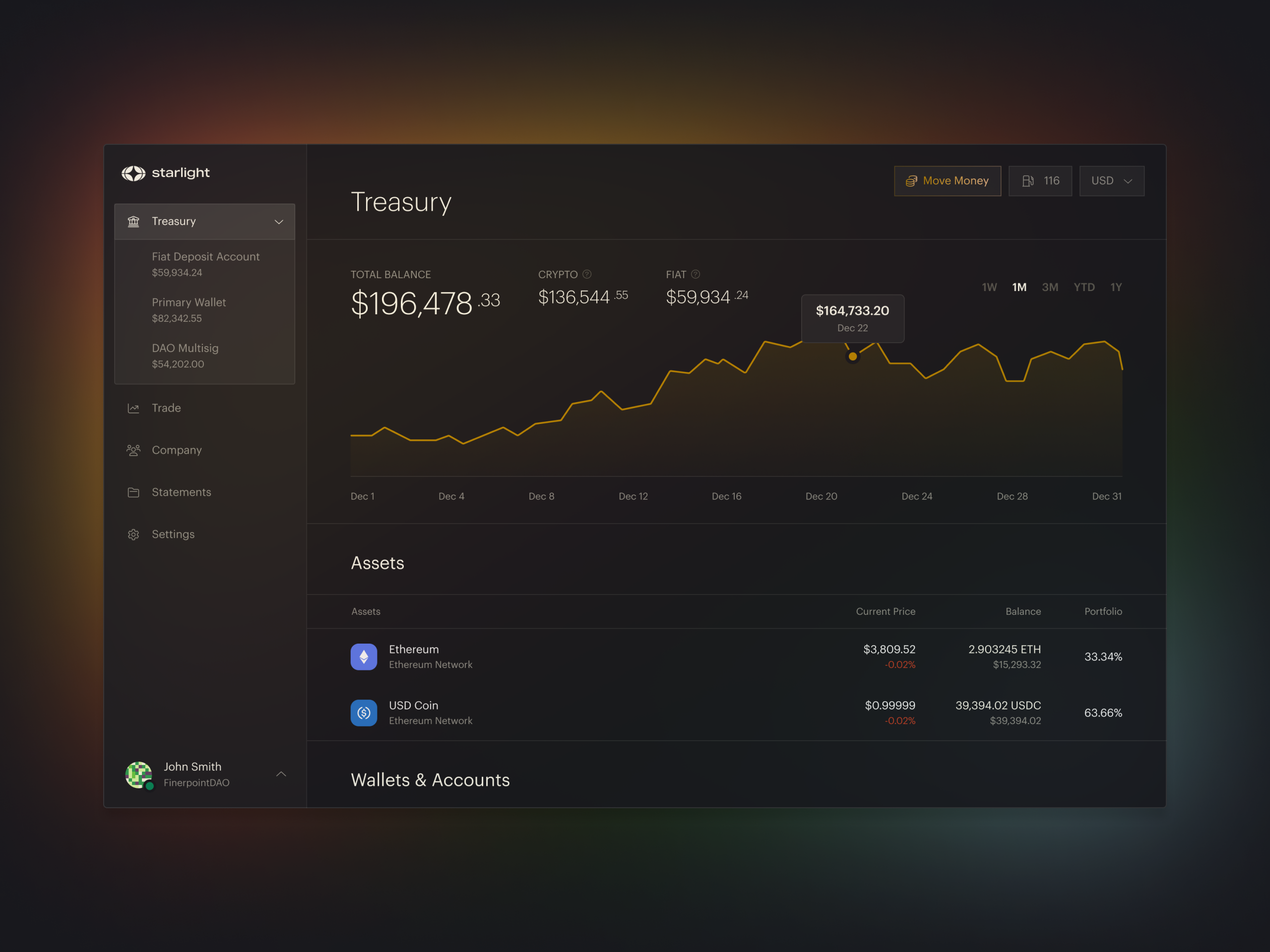 Eventually, Nguyen hopes Starlight will be able to meet the needs of every business that needs crypto to interact in what he called the “new economy” of web3.

“No matter what you do, you will need some sort of crypto in your treasury to operate in the crypto economy, whether it is paying for services, paying people, or buying certain things,” Nguyen said.

Starlight is still in private beta mode, but plans to launch its product in the coming months, according to Nguyen. While the platform only supports “a handful” of cryptocurrencies today (Nguyen did not name which ones), Starlight’s plan is to support many major stablecoins and cryptocurrencies at its public launch, Nguyen said. He noted that the startup is actively working on adding support for the Avalanche and Solana blockchains, and that it is “chain-agnostic,” meaning Starlight decides which cryptocurrencies to support based on user demand rather than its own judgment on any one of them.

The platform will be free for users, though Starlight eventually hopes to monetize through other revenue streams, like offering its customers the ability to stake their cryptocurrency and taking a percentage of the yield they earn by doing so, Nguyen said.

Nguyen thinks part of the reason a crypto-focused solution like Starlight hasn’t been built at scale is that builders in the crypto space have been focused on other projects and are used to relying on “duct-tape solutions” for their crypto spend management. Although Nguyen and Yang are first-time founders, Nguyen believes that having gone through so many ideas before finally deciding to build Starlight constitutes a major advantage for the startup.

“You really need to be a second, third, fourth or even fifth-time crypto explorer to come across a problem like this, right? Because most [founders] who are building crypto products are either first or second-time builders or explorers. If they come across this problem, they will probably just ignore it, find a workaround solution and move on and build their thing. That’s what happened to us the first few times when we came across it, too,” Nguyen said.

To build out the platform and prepare for its public launch, Starlight has raised $5 million in seed funding. Abstract Ventures and A* Capital co-led the round, and BoxGroup, SV Angel, Paxos, South Park Commons, and Brevan Howard participated alongside a group of angel investors, including former Coinbase CTO Balaji Srinivasan, Plaid co-founder William Hockey, and others.