Streaming media platform Plex is expanding on its mission to serve as a one-stop shop for media and entertainment with the launch of new features designed to help users discover content to watch across their streaming services and save titles to a universal watchlist. The company believes the additions will make Plex more useful in today’s increasingly fragmented streaming landscape where it’s hard to keep up with what’s available to watch on which services — particularly when content regularly changes hands as licensing deals expire.

“Everybody has their content and exclusives. Things are moving around from one service to the next. How do we expect users to navigate this?,” says Plex’s senior director of Product and Design, Jason Williams, speaking about the issues with the current streaming landscape. “We really wanted to solve that…and get back to the roots of Plex, which is solving problems for users around movies and shows,” he adds.

At launch, users will go through a brief onboarding process where they will select the various streaming services they have access to, both free and paid. This helps Plex personalize its universal search results and new discovery features. 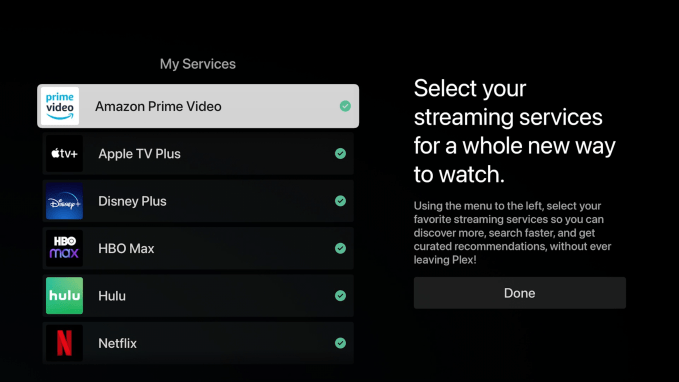 After setup is complete, users will be able to search for any piece of content and find where it’s available for streaming, rental or purchase.

From this universal search interface, Plex users can search via titles, people, genres or collections — the latter referring to groupings like “Star Wars,” where there are several titles available under one larger umbrella. Currently, the people search is limited to users’ own media collections, Plex tells us, but that option will soon roll out to universal search, as well. 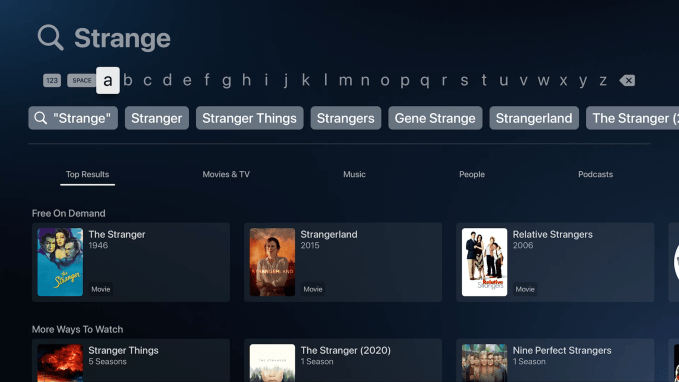 As of today’s launch, Plex has more than 450 services indexed for search on a global basis — hundreds of which are in the U.S. — but the actual search results will vary based on your region and which services you’ve told Plex you have access to.

When viewing a particular title, Plex will first display the streaming options users have access to ahead of other services. It will also highlight if the title is currently available to stream through Plex’s own ad-supported streaming catalog. And it will indicate if the user has the title available in their own media library.

On the title’s page, you can view other information about the show or movie, like its runtime, description, category, rating, cast, director and more. From here, you can also take actions like watching a trailer, adding the title to your watchlist, or marking the program as “watched.” Helpfully, you can choose to launch the content directly on a particular service by clicking one of the options. This feature leverages deep linking technology and works on the web, Android mobile, iOS, Android TV, Amazon Fire TV and Apple TV at launch. (Roku support is not yet available, however, due to its existing policies around deep links.) 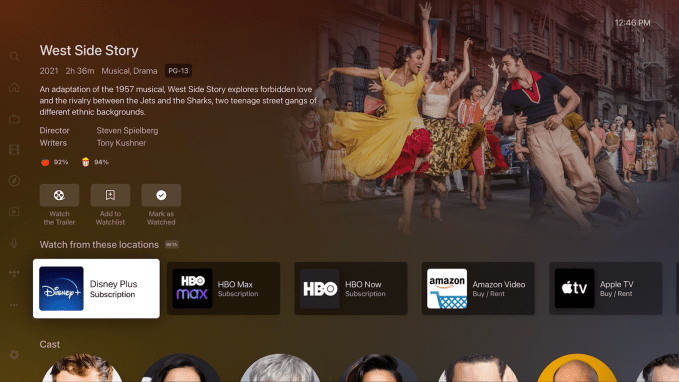 Another new feature arriving today is meant to solve the growing problem of having too many streaming services. Despite the numerous options we now have available, it can be difficult to figure out what to actually watch or remember what you had wanted to see.

These days, users often open up a favorite streaming app like Netflix, scroll down through the rows of content to see what’s popular, trending and what’s new to the service, then switch over to another streaming app to do the same. This is a frustrating and inefficient way of finding new movies and shows you’re interested in, and ultimately, says Williams, “a terrible experience for users.”

With Plex’s new Discover section, users will have a way to browse through curated and personalized selections of content from across their streaming services.

There are also other recommendations available — like “what’s new for the family,” for those looking for more kid-friendly titles across their services, as well as rows that highlight content on a single service, like Netflix. The benefit of this feature is that you don’t have to flip through multiple streaming apps to get an overview of what’s new and popular right now. 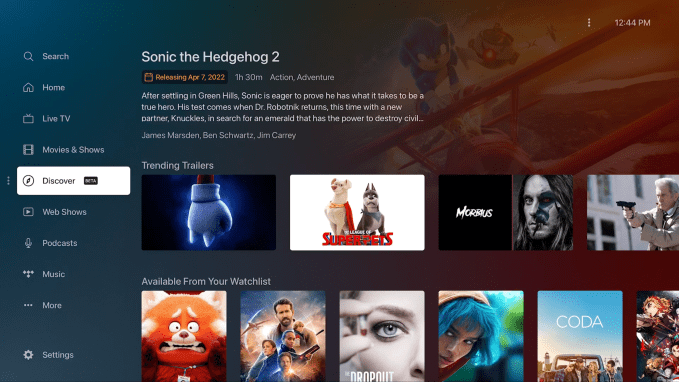 To be clear, however, Plex is not working with the streamers themselves to integrate what their internal data has determined to be the most popular and trending content. Instead, Plex is relying on partnerships with companies that offer other data feeds to create its collections of suggested content, then personalizing those to the individual user based on which services they have available to them.

“We’re looking through these various APIs — and some of them use social data — then we aggregate our own ‘trending,'” explains Williams as to how the Discover section is programmed. “So this is kind of our own view of trending. We’re trying to help solve that problem of [people who use] three or four different services.” The final new feature is a long-awaited universal watchlist, which ties the universal search and discover features together.

As the name implies, it’s simply a way to save the movies and shows you want to watch, without having to worry about which service they’re found on. If the title moves around, it won’t matter since the watchlist points you to all the places where that show or movie can be streamed, rented or purchased. (For the time being, this doesn’t include Plex’s free livestreaming catalog, but that could change in time.)

At present, if you watch a title from your Watchlist it will be removed, so your list doesn’t get bogged down with things you’ve already viewed. 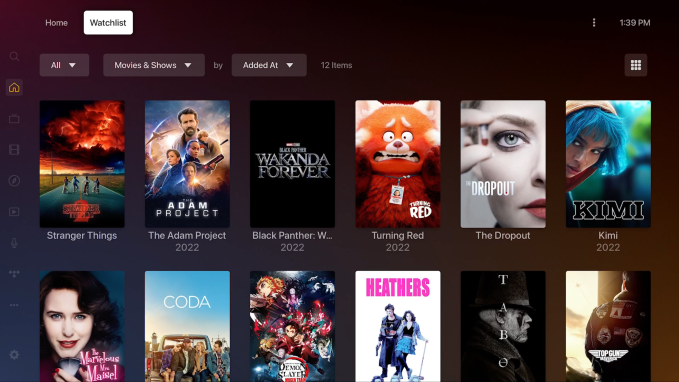 The combination of new features will make Plex more competitive with services like Reelgood or Whip Media’s TV Time, which help users discover things to watch across their streaming services and keep track of their viewing by marking off which episodes have been seen — something that Plex offers, too. But in a way, the update makes Plex competitive with some streaming platforms themselves — like Roku, for instance, which also offers built-in universal search capabilities.

The changes follow a period where Plex has been reinventing its service for mainstream consumers, instead of just the home media enthusiast in need of software for organizing movies, TV, music and photos on their home networks. The company first began to go after the larger market of cord-cutters with the 2017 launch of a low-cost, DIY streaming TV service. It later moved into free, ad-supported streaming and in 2020 took on rivals like Pluto TV with its own launch of a live TV service. On the heels of this growth, Plex announced $50 million in funding in April 2021.

With the addition of these features that show you where you can watch a piece of content, the next logical step for Plex is to help users facilitate that viewing by selling subscriptions, similar to Amazon’s Prime Video Channels, or similar options available on Apple TV or The Roku Channel, among others.

Williams admits that sort of feature would be in the company’s wheelhouse, but Plex hasn’t yet decided to take that step. However, Plex is planning to still launch the video and rental store it had earlier teased as being on its roadmap before COVID complicated everyone’s plans.

The new features are rolling out to all Plex users today, including both free users and Plex Pass paying subscribers.