The adoption of buy now, pay later (BNPL) in Nigeria as a payment option both online and at the point of sale is expected to record a CAGR of 20% from 2021 to 2028, per this report.

BNPL’s growth is further highlighted as GMV is predicted to increase from $204 million to over $1 billion by 2028. Key to this growth is the activities of providers whose platforms encourage consumers to make instantaneous purchases and pay over time.

To that effect, CredPal, one of the earliest pioneers of buy now, pay later in Nigeria, has closed a bridge round of $15 million in equity and debt — the latter constituting a very large chunk of the financing — to expand its consumer credit offerings across Africa.

Per a statement shared by the company, the investment will support its expansion into other African markets, mainly Kenya, Egypt, Ghana and Cameroon.

In 2018, CredPal launched a point-of-sale consumer credit service plugged into e-commerce stores for lower-to-middle class income earners. The concept of BNPL was nascent at the time, at least in Nigeria, and because adoption wasn’t great, CredPal flirted with a new credit offering via cards which saw an uptake in usage, CEO Fehintolu Olaogun told TechCrunch.

“We launched the cards to increase the reach of our BNPL service and that caught on well,” he said. “But now people can shop in installments by walking into a partner store or using our credit card.”

The credit card is one of two options — the second via the mobile app — consumers can use to access CredPal’s BNPL services when they visit a partner store to shop for items ranging from electronics, particularly smartphones, to furniture and groceries. 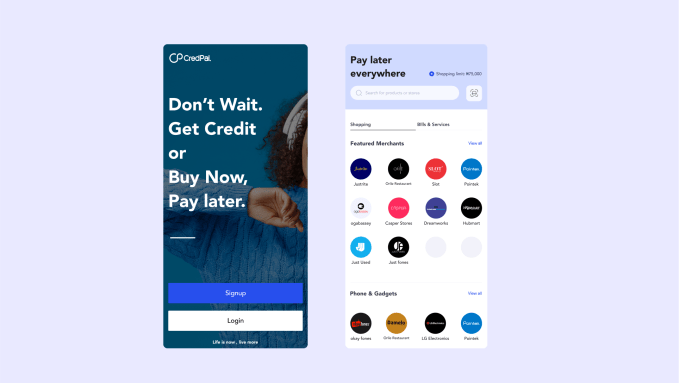 Olaogun said in instances where consumers pay back before two months, they might not pay any interest — which is covered by fees the company charges merchants. Speaking of merchants, CredPal has 20,000 merchant signups; however, it has onboarded more than 4,000, with only 600 being monthly active merchants. They serve a monthly active customer base of 85,000.

As one of the foremost providers of BNPL services on the continent, these numbers appear somewhat impressive — yet, knowing how early the sector is in Nigeria and most of Africa, YC-backed CredPal is barely scratching the surface.

But becoming a market leader in Nigeria or Africa isn’t CredPal’s for the taking. There’s Sympl, Carbon Zero, Shahry, Lipa Later, PayLater and CDCare, and newer entrants such as Klump and even big guns like Tabby eyeing different regions across the continent.

“One of the things that differentiate us is that we provide an omnichannel approach to BNPL,” said the CEO who founded the company with Olorunfemi Jegede, on how CredPal is positioning itself in the face of growing competition.

“We’ve built out a merchant suite to cater to those who have like full-fledged e-commerce websites to those with brick and mortar store and social commerce merchants. We are merchants agnostic and also our tech allows consumers to be able to interface with CredPal across a wide range of channels.”

The omnichannel merchant suite, CredPal Pay, allows businesses of all sizes and categories to accept buy now, pay later options. The platform serves as a point-of-sale infrastructure that enables BNPL through a credit payment link, checkout plugin, QR codes\ and a transaction management system. CredPal will face competition with ThankUCash in this segment of providing BNPL infrastructure to merchants.

As CredPal looks to expand both product-wise and geographically, the company said part of the new investment will also help it secure a partnership with telecom operator Airtel Nigeria to allow low to middle-income earners to purchase smartphones in instalments.

The debt financing was provided by Credit Direct, a subsidiary of First City Monument Bank (FCMB) and a few unnamed financial institutions.

Greenhouse Capital, a fintech and embedded finance-focused venture capital firm, is one of the existing backers of CredPal. It participated in this equity bridge round which is coming two years after CredPal raised $1.5 million in seed funding, money used to launch its credit card product.