Turns out the smartphone market can still surprise — to an extent. You can almost certainly figure out which two companies command the first and second position in the U.S. market these days. You would, however, be forgiven for doing a double-take after hearing that Motorola has managed to shore up third place, according to new figures from Counterpoint Research.

It hasn’t been a particularly smooth decade or two for the brand. A dominant name after the turn of the millennium, things have been rocky for the firm in this post-iPhone world. After some massive losses, Motorola split in two, selling off its Mobility wing to Google in 2011. Google’s record with hardware being what it is, the phone company switched hands again three years later.

Lenovo has been a far more stable home for the erstwhile brand. Its successes can, in part, be attributed to its decision to largely eschew the high-end of the market dominated by the aforementioned brands. Brazil and India, in particular, have become key markets for the company. The U.S., too has remained a stronghold — and a thinning out of the herd in the mid- and budget tiers created a vacuum that the company has been more than happy to fill.

According to Counterpoint’s figures, Motorola saw a staggering 131% year over year growth in 2021. That makes the firm the number two in smartphones below $400 in the U.S. and number three overall. In particular, its sub-$300 phones have gained traction, with Moto nabbing around 10% of the total market. 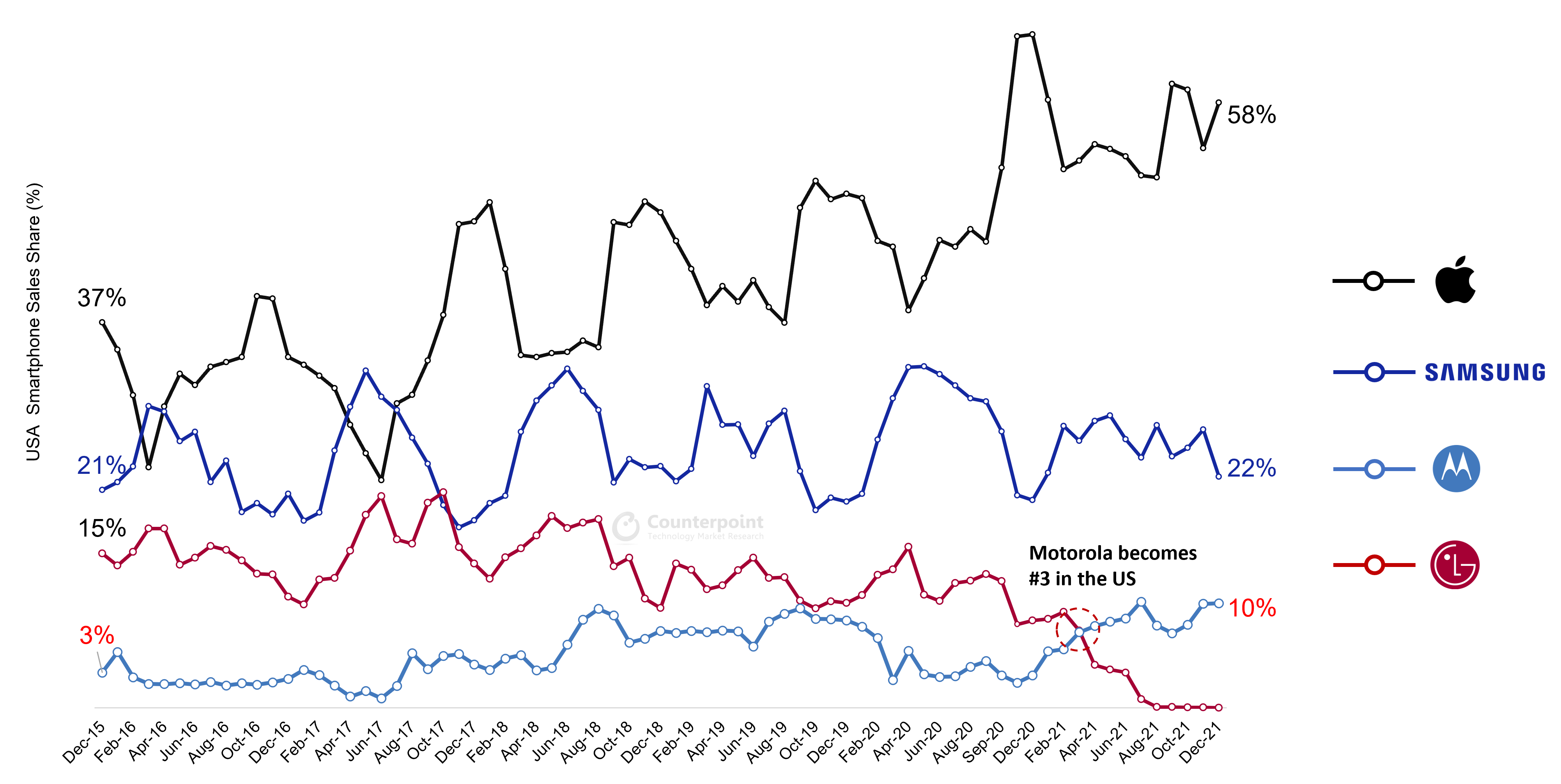 It’s not quite a return to its 2008 dominance, but it’s the company’s best showing since the smartphones came to dominate the phone market. Pre-paid providers like Metro, Cricket and Boost have been a big piece — it now controls around 28% of that market. Most important, however, are the names that aren’t on the list here. It’s been a weird few years for the industry, and Lenovo was clearly well positioned to pounce.

Following its addition to the U.S. entity list, Huawei is effectively a non-factor. After selling off a huge chunk of its R&D to Google (them again?), HTC has largely gone quietly into that good night, choosing instead to focus on VR (the jury’s still out on that move). But the biggest no-show is LG.

Last April, the South Korean hardware firm exited the smartphone market entirely. “Moving forward, LG will continue to leverage its mobile expertise and develop mobility-related technologies such as 6G to help further strengthen competitiveness in other business areas. Core technologies developed during the two decades of LG’s mobile business operations will also be retained and applied to existing and future products,” the company said at the time.

The move appears to have opened a perfectly Motorola-shaped hole in the market. The smartphone maker’s successes have also been bolstered by its position as a legacy brand. That is to say, while it may have faded from consciousness a bit, there’s still enough goodwill from its glory days to expedite buying decisions. If you’ve got a tight budget and find yourself shopping for a $300 phone at, say, Walmart, chances are good you’re going to gravitate toward a name you recognize — even if it’s from the Razr glory days of a couple of decades ago. And you know what? You wouldn’t be wrong. The company continues to have a good track record of making solid budget phones.

So, yeah, call it a comeback. I certainly won’t stop you.