Spotify has started testing a new “Car Mode” interface with some users, the company confirmed to TechCrunch on Friday. The test comes a few months after Spotify announced that it was retiring its simplified automotive interface called “Car View,” which displayed playback controls and your current track when driving. At the time, Spotify said it was exploring new ways to deliver in-car listening experiences and that it would be launching new features soon.

“At Spotify, we’re always working to ensure our users have the best possible listening experience,” a spokesperson from Spotify told TechCrunch. “We can confirm we are testing a new Car Mode for some users. As with any of our tests, we always seek feedback from our users before rolling out changes more broadly.”

The new interface was first spotted by 9to5Google. The website posted screenshots of the Android version of Car Mode. Spotify did not comment on whether the new interface is also being tested with iOS users.

The screenshots show that Car Mode allows users to browse and search for music via voice controls. The Car Mode track player view includes simple controls, such as a play/pause, skip shuffle and like buttons. There’s also a microphone button that you can use to search Spotify’s library while in Car Mode. You can also use the voice controls to access recently played music or podcasts. The layout is similar to Spotify’s regular interface, but without a lot of the visual distractions that are usually present on-screen. 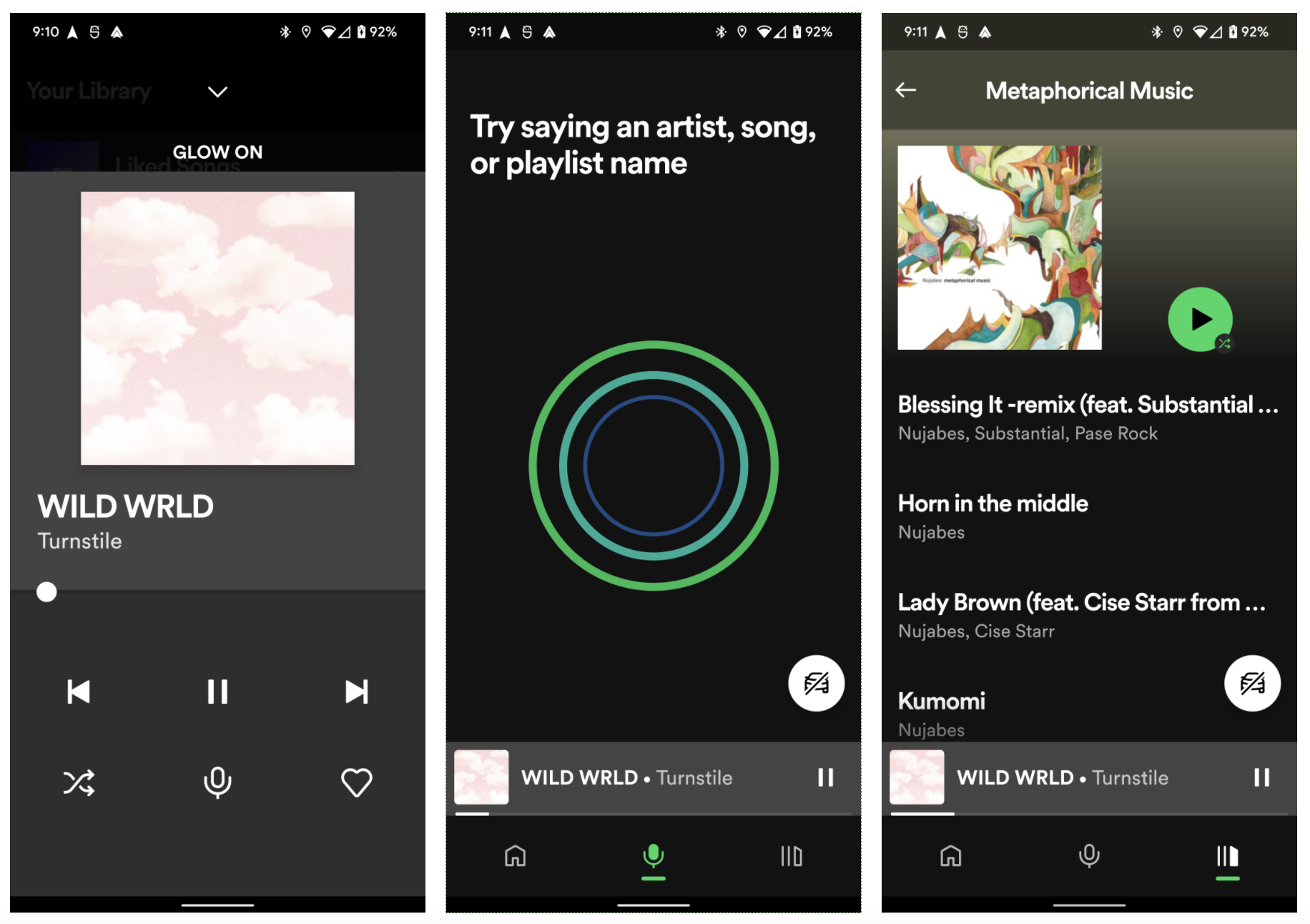 Spotify is still testing the new interface and is looking for feedback from users who have access to it, which means that the final version of Car Mode may look different than the screenshots seen above.

The new Car Mode is just one part of Spotify’s efforts to provide a seamless in-car listening experience. Last April, the company officially announced the limited U.S. release of its first hardware device called Car Thing. The device is aimed at Spotify Premium subscribers and vehicle owners who don’t have a built-in infotainment system offering easy access to Spotify, like Apple’s CarPlay or Android Auto. Spotify made Car Thing available to the general public in November for $89.99.

Car Thing connects with the Spotify mobile app on your phone, then uses the phone’s cellular signal (or Wi-Fi, if available) to stream your music or podcasts over the car’s sound system. The device works with USB, Bluetooth and Aux. You can access the service by either saying “Hey Spotify,” tapping its touchscreen, turning the dial or using one of the four preset buttons at the top of the player.

Spotify can also be integrated with Google Assistant in order to listen to music and podcasts hands-free while driving. The feature also works with Google Maps so you can navigate while listening to Spotify. To do so, you can link your accounts and say ‘Hey Google, play Spotify.’