Kwik, a Nigeria and French-based startup that provides logistics services to B2B merchants, from social vendors to e-commerce platforms, has raised $2 million in Series A funding.

The financing round was led by XBTO Ventures, a crypto finance company with a VC arm that invests in digital assets, among other types of startups. New and existing investors such as Humla Ventures, Nabuboto, Ubisoft CEO Yves Guillemot and Pulse Africa founder Leonard Stiegeler participated.

Kwik plays in a crowded logistics and delivery space with well-known providers in Nigeria such as Gokada — and in other parts of Africa like Egypt’s YDS and Bosta. Its last-mile delivery service connects businesses of different sizes to find independent delivery riders for transport of their products to business and individual customers.

According to founder and CEO Romain Poirot-Lellig, his company wants to “bring the informal economy into the formal economy,” focusing on last-mile delivery, e-commerce (warehousing and fulfilment) and financial services.

“Our goal is for Kwik to become the prime app choice for African social vendors and traditional merchants going digital. Integrating delivery, payment and e-commerce tools seamlessly in one easy-to-use mobile app is a catchy proposition,” he said. “This financing round will enable us to expand across all three key verticals and select geographic areas”.

Kwik has made significant headway with providing last-mile delivery and e-commerce fulfilment services to merchants. Since launching in Lagos in 2019 and extending its presence to Abuja, the company has onboarded more than 100,000 merchants who use Kwik’s site and mobile apps to run the logistical, commercial and financial needs of their businesses. More than 75% are weekly active users, Poirot-Lellig said.

“We’re not trying to build a customer super-like app. We want to do a merchant super app. We were building an app that merchants can use to run their online businesses, from selling to delivery to financing, said the CEO, who put €200,000 of his money into the startup in 2019.

“We are purely a software company. We create a community and a matchmaking playground. We ensure that we enforce the rules of the playground, both on the merchants’ side and on the partners’ side.” 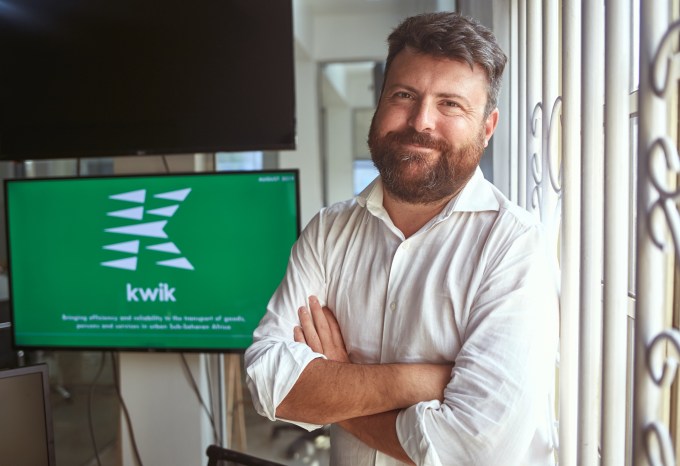 Kwik runs an asset-light and marketplace model where it liaises with third-party providers of bikes, trucks, vans and warehouses and connects them with merchants. Per information on its site, deliveries of packages — ranging from parcels to food items — take less than two hours.

The two-year-old company, which raised a $1.9 million seed round last March, takes an average commission of 20% for each delivery.

The last part of Kwik’s puzzle, financial services, took off toward the end of 2021 after it launched payment services, which, according to the company, now represents more than 10% of its GMV. But there’s more to be built around that, and the new investment helps fast-track growth in that aspect.

“The financing part is the last part we’re building. For the moment, we connect riders and financing institutions that are willing to finance bikes. On top of that, we’re going to launch a B2B lending marketplace by the end of the year to enable merchants to get financing.”

Kwik will also use the funding for customer acquisition and finance operations across Nigerian cities beyond Lagos and Abuja — Ibadan, Kano, Port Harcourt and Kaduna. Poirot-Lellig also said the company plans to increase the number of merchants on its platform to 800,000 by the end of the year.