Historically, only institutions have been able to be part of REITs (real estate investment trust), which are made up of companies that own or finance income-producing real estate across a range of property sectors.

A startup called Flock Homes wants to give landlords a similar ability to own shares of a portfolio that is made up of multiple properties, and it’s just raised a $26 million Series A funding round toward that effort.

Founder Ari Rubin dropped out of business school to pursue his concept behind the startup, which went live in May 2021 with four homes in Denver, Colorado. Its typical user is a landlord of single-family homes with one to four units that doesn’t necessarily want to be rid of their investment but also doesn’t want to deal with managing it anymore.

“Flock buys the property from the landlord, who then gets shares in this partnership which owns a bunch of houses,” Rubin explained to TechCrunch. “They get to keep all the benefits of owning real estate without any of the burdens such as paying taxes or maintenance.”

Once the properties come into Flock, the company owns and operates the assets. Meanwhile, the landlords then get shares in a diversified portfolio similar to a REIT, Rubin said.

“They also get their share of all the rental income, which we collect and hold back a portion for maintenance, property taxes and insurance,” Rubin said. “Then we pay out the remainder in a distribution.”

Some people decide to reinvest their proceeds while others opt for cash flow, with the ability to redeem shares over time.

“Most people, though, want to hold on to them forever, live off the income and pass them on to heirs,” Rubin said. “So it also can serve as an estate planning tool. But either way, they can put their ownership on autopilot and live off of the diversified income.”

The company makes money by acting as an asset manager of the fund and charging management fees, which is 1% of the value of someone’s account. It claims to save the landlord money in taxes and other “frictions” if they had sold the home traditionally.

Today, Flock has 110 homes in its portfolio across Denver, Austin,Texas and Kansas City. The company plans to launch in Seattle and “a handful of more markets” this year.

“Institutions have been doing this for a long time via a mechanism called a 721 Exchange and it takes an army of lawyers and tax professionals and complicated pieces of paper to make it work. We’re building technology to streamline that process,” Rubin said. “We’re taking something that’s existed for a number of decades and are using technology to make it more accessible to more people.”

The company aims to build a standardized portfolio of homes, so it won’t be including a $25 million mansion outside of Palo Alto, for example. It uses third-party valuation models to come up with fair market value of a home.

The way it works is that a landlord submits the information about a house through Flock’s website. The Flock team then uses a proprietary valuation system to derive a headline valuation, and then makes adjustments to the final price based on the amount of repairs and deferred maintenance found in the house. Unlike an iBuyer, Rubin said, the company “never profits” off a house value.

“We’re focused on making sure the system is fair and transparent for every owner putting in their house,” he said.

But what if homes depreciate in value? Rubin said the aim upfront is to only include homes with greater potential for upside.

“We look for homes that will add value to other landlords and owners who have put houses into Flock,” Rubin said. “We have no idea what the market is going to do long term. Maybe it will keep going up and down. But we only take homes that we feel confident we can operate efficiently and provide really good returns to owners and good experiences to the residents who are living there.” 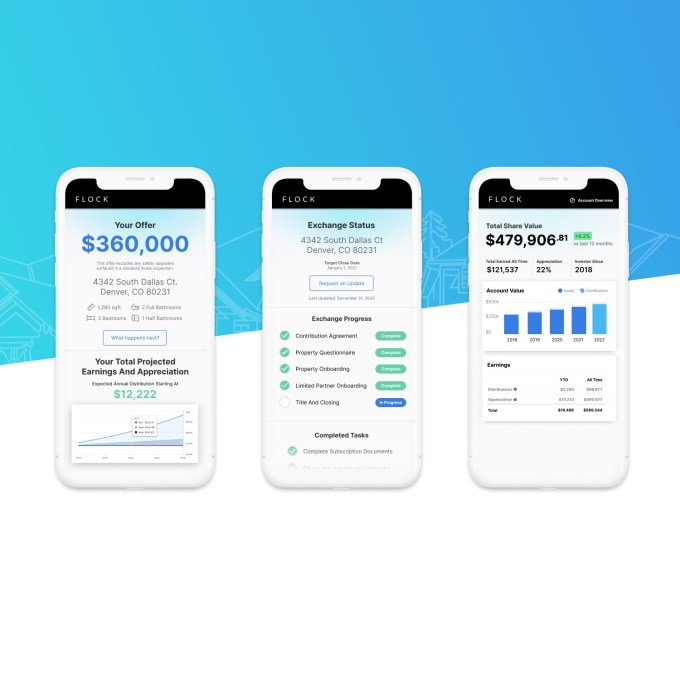 Primary Ventures, Susa Ventures and BoxGroup co-led Flock’s $6.5 million seed round last March, so this latest financing brings its total equity raised to $32.5 million. With 17 employees, it has dual headquarters in Denver and San Francisco.

It plans to use the capital from this raise to continue to build out its technology and toward hiring. The company operates with an asset-light model, Rubin said, in that it doesn’t need cash to buy homes and rather uses money from when people are rolling in their equity from their homes.

A16z General Partner Alex Rampell believes that one problem with being a landlord is that it can be very difficult to just retire.

“Owning stocks and bonds can provide you with passive income and asset appreciation, but being a landlord means you need to fix toilets, worry about vacancies, find tenants and more,” he said. “The grass is always greener on the other side, except when you are trying to enjoy retirement and literally need to water the grass to find a new tenant.”

He was drawn to Flock’s ability to allow any landlord to roll their properties into the portfolio it has created, while still providing the former landlord with the same income stream with no immediate tax consequences.

“In the process, it is assembling a powerful machine to aggregate many properties, democratizing investor access and improving resident experiences with technology,” Rampell added.