Coinbase is beginning to add support for payment instruments UPI and IMPS in India, making its crypto exchange broadly functional in the world’s second largest internet market for the first time in years.

Several users noticed on Thursday that the world’s largest publicly listed crypto exchange’s app had added the new payment methods in the country, though the scale of the rollout remains unclear. UPI, a payments infrastructure built by a coalition of retail banks, is the most popular and one of the most convenient ways Indians transact digitally.

Coinbase, which did not immediately respond to a request for comment, acknowledged the change briefly in a support page that it has since taken down. It’s not clear at this point with which bank(s) Coinbase has partnered in India to support UPI and IMPS payments. Banks, under the pressure of Indian central bank Reserve Bank of India, have largely avoided engaging with crypto firms.

The firm, which maintains presence in more than 100 markets, has offered its eponymous crypto exchange app in India for several years, but its lack of support for any payment method significantly curtailed its utility among users in the country. (Coinbase has long offered its decentralized app, Coinbase Wallet, in many markets, including India.) 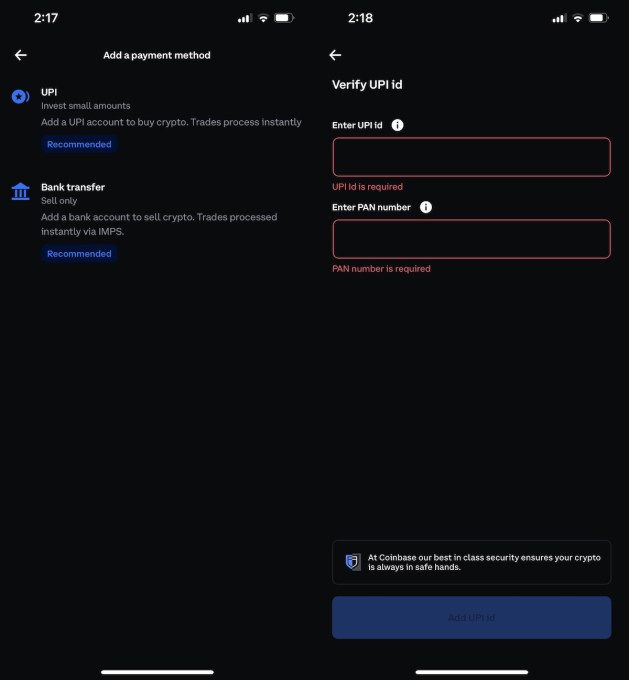 Coinbase has instead been largely active in the country by the means of investments. The firm’s venture arm has backed CoinSwitch Kuber and CoinDCX, two of India’s most popular cryptocurrency exchanges. The firm, which last year acquired Indian AI-powered customer support platform Agara, has also backed Router Protocol, a cross-chain infra startup.

In the past year or so, Coinbase has started to expand its team in India, hiring former Google Pay executive Pankaj Gupta in a key role. The firm plans to hold an India-focused event on April 7, where many executives, including Coinbase CEO Brian Armstrong and Chief Product Officer Surojit Chatterjee, are set to speak.

Coinbase’s rival, Binance, is also very popular in India. The firm, which acquired local Indian crypto exchange WazirX, has over 5 million monthly active users on its eponymous app in the country, according to mobile insight platform App Annie, and is especially popular among more tech-savvy audiences.