YouTube today announced it will for the first time stream free, ad-supported TV shows — a move that puts it into more direct competition with the growing number of free streaming services on the market, including Tubi, Pluto TV, The Roku Channel, IMDb TV, Xumo, Plex and NBCU’s Peacock. The company said it will initially offer its U.S. users access to more than 4,000 free TV episodes from shows including “Hell’s Kitchen,” “Andromeda,” “Heartland” and others. It plans to add to its free streaming collection up to 100 more titles each week, including both shows and movies.

YouTube is already home to a number of free, ad-supported movies, so today’s launch of free TV is more of an expansion of its existing free streaming efforts, rather than something entirely new for the comapny.

Currently, YouTube hosts over 1,500 movies from companies like Disney Media & Entertainment Distribution, Warner Bros., Paramount Pictures, Lionsgate, FilmRise and others. This month, for instance, it’s added new movies like Gone in Sixty Seconds, Runaway Bride and Legally Blonde, among others.

But the broader streaming industry — including both ad-supported and subscription-based — tends to be gravitating toward TV instead of movies. New original projects that would have likely been movies, or at least mini-series, in previous eras, are often now released as bingeable shows. The platform makers like this trend, too, as it means users are logging more hours watching content on their services. The talent and money have long since followed, with TV series winning both the critical attention and acclaim that was often only granted to Hollywood films in years past. 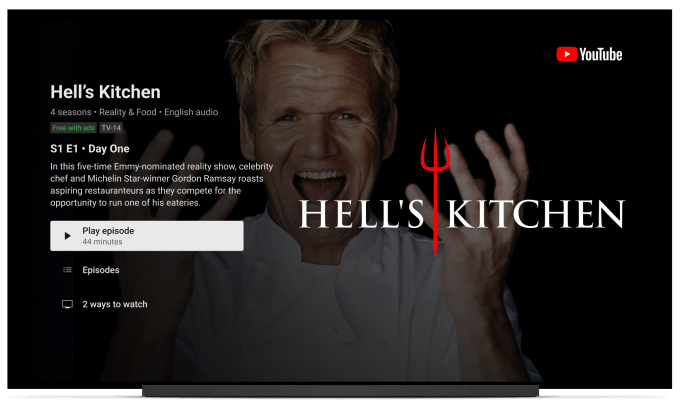 Meanwhile, free TV streaming is now driving much of the growth in the wider streaming market.

According to data from Kantar, 85% of U.S. households have a video subscription, but quarterly growth comes primarily from free ad-supported TV and ad-supported video on-demand services. Indeed, 18% of U.S. households now use at least one free ad-supported TV service as of the fourth quarter of 2021 — a figure that more than doubled since the fourth quarter of the prior year. Most of the new users in the final quarter were those signing up for Peacock, IMDb TV, Tubi and The Roku Channel accounts, Kantar said.

YouTube, meanwhile, has a significant connected TV footprint in the U.S., if not free TV. Nielsen data indicates YouTube reached over 135 million people on connected TVs in the U.S. in December 2021. But when users searched for TV shows on YouTube, it would direct them to either rent or purchase the titles in question — free streaming was not an option.

That’s changing with the launch of the free TV service. YouTube says it will now introduce new navigation and immersive banner art that will help users choose how they want to watch — either via rental or purchase, as before, or free with ads, when available. The commercial breaks, meanwhile, will vary in frequency by viewers and the context in which they’re watching shows, YouTube says. Most of the ads are sold through the YouTube Select program.

Beyond the handful of bigger names, many of the shows available for free are older series, like “Father Knows Best,” “Unsolved Mysteries,” “21 Jump Street,” “The Carol Burnett Show,” “That Girl,” “Car 54, Where Are You?,” “The Lone Ranger,” “Hopalong Cassidy,” “Laugh-In,” “The Dick Van Dyke Show” and others. Many of the free shows only offered one or two seasons, even if the series ran longer. (YouTube says more seasons will be added over time.)

YouTube also noted that many of the free TV shows are available in high-def 1080p with 5.1 surround sound audio on supported devices.

The shows will become available to U.S. users starting today through the web browser, on mobile devices and on connected TV through the YouTube TV app. You can view a full list of shows through YouTube.com/freeshows.