ServiceNow introduced a new overall application design today, and while they were at it, launched Automation Engine, a tool developed to help companies speed up the creation of automations, including native RPA (robotic process automation) integration. They are both part of the new San Diego release available today.

Dave Wright, chief innovation officer at ServiceNow, says the release is geared toward streamlining and simplification. “One of the key things about the new design is this concept of the ‘Next Experience,’ this kind of reinvention of what the user experience is like,” he said.

Amy Lokey, SVP and global head of design at ServiceNow, came to the company about two and a half years ago and began a systematic review of the company’s tools from a design perspective. While she liked what she saw on the mobile side of things, the web application hadn’t been updated in some time and she wanted to streamline and modernize it.

“When I took a deeper dive into our platform experience, which is a web-based application that has a broad number of tools and applications within it, that was really where I felt we had the biggest opportunity to both innovate and modernize the experience,” she said.

She said that they needed to be really sensitive to changing the overall design because it is the central place where people use ServiceNow, and they wanted to be sure they were making it easier without confusing long-time users. 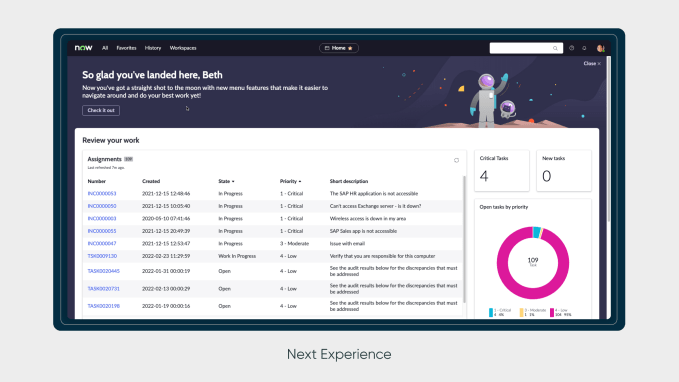 “It’s used by service agents across IT, HR and customer service. People are in this application eight or more hours a day potentially to do their work. So any changes needed to be productivity-boosting, needed to have intelligence built into the experience and needed to feel cohesive and simple to use to really empower these users,” Lokey explained.

She said that with all of this in mind, the redesign involved three key areas: streamlining navigation, making search intelligent and simplifying personalization. All of that was done in the name of making users work more efficiently and smarter without disrupting the way they work.

In addition, the workspace is now highly customizable and includes elements like the ability to move menus around where you want them and dark mode for working at night or in poor lighting conditions, something that service technicians could very well experience.

The other big change in the new release is Automation Engine, which brings together the previously announced Integration Hub with robotic process automation capability that the company got when it acquired Intellibot last year. “Automation Engine is this combination of Integration Hub and RPA Hub. So what it allows us to do is do the standard integrations, but also do those integrations and be able to execute a bot process that sits on top of it,” Wright said.

This could be an unattended bot, one that runs without a human involved or attended where a human is required to complete part of the task. While the tool is designed to simplify ServiceNow workflows by adding automation, the implementation could require someone with a speciality in understanding how work flows through an organization to create them, or help from a third-party consultant to build them correctly.