Scratchpad began life as an easy way to add information to Salesforce by acting as a layer that sits on top of the popular CRM application. But the startup’s founders knew it needed to be more than sales utility, and today it announced a new capability that makes Scratchpad a central workspace for sales people by using intelligence to surface the most likely prospects to close deals.

Company co-founder and CEO Pouyan Salehi says the company spends a lot of time watching salespeople and how they work. That’s how they came up with the idea of simplifying the way they enter data about a deal inside Salesforce in the first place, but as they have evolved they wanted to find a way to quiet some of the notifications noise they experience on a daily basis. 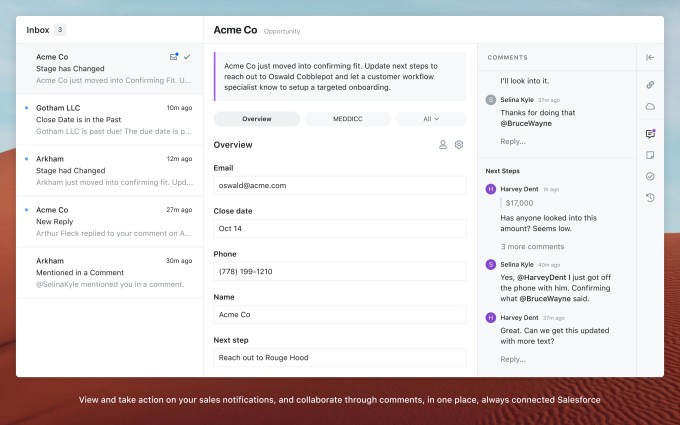 “They’re just being bombarded with notifications, these alerts, and they’re causing distractions or breaks to their flow. It’s causing a ton of work,” Salehi explained. He said that the startup began to explore how it could cut through that noise and surface the information that matters most to salespeople, typically that’s those deals they can close the fastest. Where does it make sense to put in the most effort and what do I need to do next to make it happen?

“We came up with this concept of the first inbox for sales. So it’s a container that holds all your important notifications and alerts. And the big differentiator is that not only does it give them those notifications, but it gives them a very fast and easy way to take action on them,” he said.

The notifications that a salesperson sees are customizable. The customer can build them in a simple workflow engine called the Scratchpad Notifications Builder, and Salehi sees this as the first step in helping sales teams build workflows that make sense for how they work.

The company announced a $33 million Series B in January, and this announcement is at least partly about putting that money to work to expand the capabilities of the product to give it more of a platform feel.