Apple today announced that Arizona will become the first U.S. state to offer residents the ability to digitally store their driver’s license or state ID in Apple’s Wallet app. The company had already said last fall it had secured the state to be among the first to offer the new feature. With the launch, Apple device owners will be able to tap their iPhone or Apple Watch to present their ID, starting at select TSA security checkpoints in Phoenix Sky Harbor International Airport.

To get started, Arizona residents will tap the plus “+” button at the top of the screen in the Wallet app on their iPhone, then choose “Driver’s License or State ID,” and follow the on-screen instructions to start the setup and verification process, Apple explains. The person is verified by taking a selfie, then by scanning both the back and front of their existing driver’s license or state ID card. (In other words, this is not a replacement for getting an ID or license from the DMV to begin with.)

There’s also an additional fraud prevention step that asks users to complete a series of facial and head movements during the setup process. The app will present a camera view where the user will need to turn their head to the side as a means of ensuring that they have not, for example, held up a photograph to the camera in an attempt to commit fraud.

These scans and the user’s photo are securely provided to the issuing state for verification. Apple additionally sends a numeric indicator of its confidence that the person presenting the ID is the owner of the ID. It does not send the video of the person moving their head, as had been requested during verification.

The approval process generally takes just minutes and users will be notified when the ID is available in Wallet, as they are when adding credit cards. 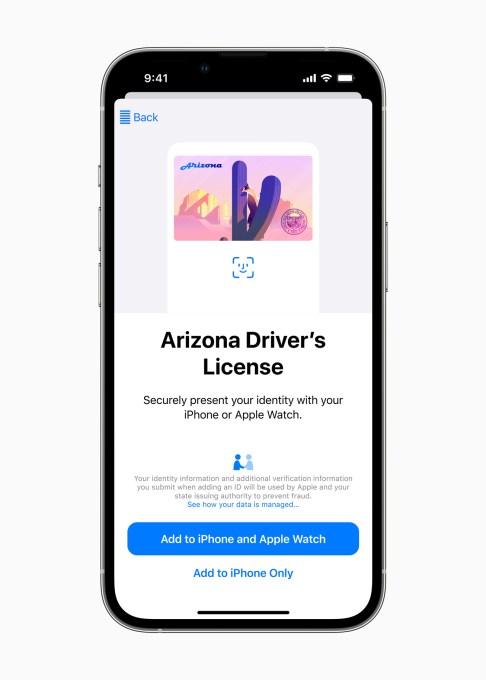 Once the ID or license is added to Wallet, users will be able to access it for use at supported TSA checkpoints. Users can see what information is being requested, then consent to provide the information with Face ID or Touch ID. This works similarly to Apple Pay — meaning users don’t have to unlock their iPhone to use the feature. The information is then sent to an identity reader through encrypted communication, after consent is provided.

Because the information is shared digitally, users won’t have to hand over their physical ID card nor will they have to hand over their device, Apple says. The TSA’s reader will also capture a picture of the traveler for further verification. (This is the digital equivalent to how TSA agents will look at a person’s license then back at their face to determine if they are, in fact, the same person.) 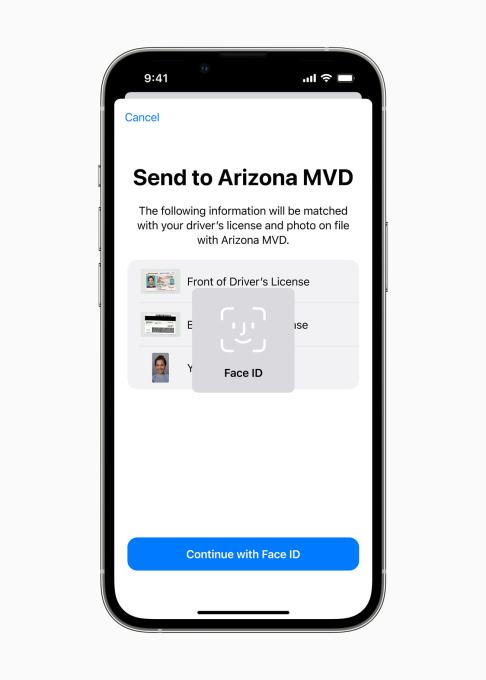 Apple says that, soon, other states will offer the feature as well, including Colorado, Hawaii, Mississippi, Ohio and the territory of Puerto Rico. And it had previously announced seven states were planning to come on board, including Connecticut, Georgia, Iowa, Kentucky, Maryland, Oklahoma and Utah, in addition to Arizona.

Apple first introduced its plan to support driver’s licenses and IDs in Apple Wallet at its developer conference last year. But in an update published on the iOS 15 website in November, Apple quieted disclosed the feature would be delayed until early 2022. The company, of course, is at the mercy of state governments to get such a feature off the ground, given they have to verify the user’s ID. 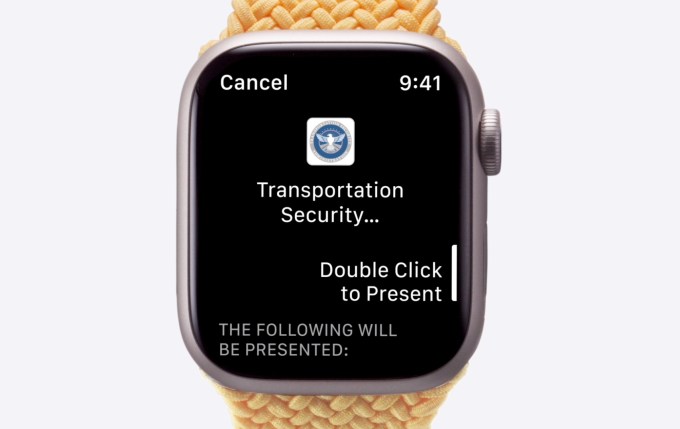 Some people may be wary of storing their ID on their phone, but Apple assures customers the ID data is encrypted when sent off to the state of Arizona for verification, and it never sits — even temporarily — on Apple’s servers. When the ID is added to the device, it’s encrypted there, as well.

There are also hardware keys associated with the secure element that are used at the time the user is presenting their ID to the TSA via the Apple device. The device then signs the driver’s license or ID data, so that the relying party (the TSA) can cryptographically verify this is a valid state ID by examining the signature of the state as well as the device signature. This means is that if someone was able to get the ID information off the user’s device, they could not present it because it’s tied to the device hardware.

The new feature is supported in iPhone 8 or later devices running iOS 15.4, and Apple Watch Series 4 or later running watchOS 8.4 or later. For the time being, only select TSA checkpoints will support the feature, starting with the Phoenix airport, with more added over time. Apple says it’s also working on other use cases in the future, including those with law enforcement partners.