FedEx has been working on a new feature for its consumer mobile app that would seemingly allow it to better compete with the popular Shop app by Shopify. One of the bigger selling points for Shopify’s Shop is how it allows users to track their purchases and shipments from across services, including not only Shopify, but also Amazon, and other deliveries coming through FedEx, UPS, USPS and other services by importing delivery tracking information from users’ email inboxes. FedEx, meanwhile, appears to be headed in a similar direction with a feature called “Crosstrack,” which tracks a user’s expected deliveries in a separate section from the tab from the one where FedEx deliveries are shown.

The feature, which was shared with TechCrunch by a developer, is currently in development.

It shows how the mobile app’s search and tracking screen would be split into two tabs: one labeled “FedEx” and another labeled “Crosstrack.” In the Crosstrack tab, FedEx app users could see a photo of their incoming purchase, the sender’s information — like Target, eBay or Wayfair, for instance — and the date of the scheduled delivery alongside the tracking number. When the item has arrived, the app will notate this with green text and a green checkmark. 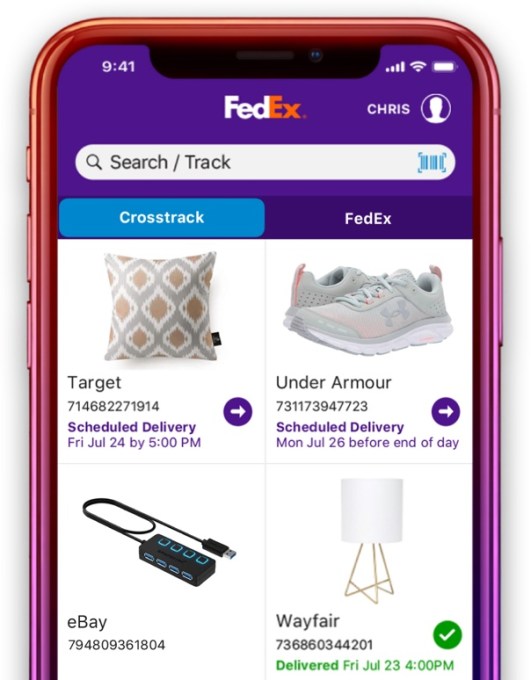 Unlike Shopify’s Shop, this expanded functionality doesn’t extend into shopping or product recommendations — it’s only for tracking, FedEx says.

The company confirmed the feature’s development with a statement.

“FedEx is constantly exploring digital experience concepts to help meet our customers’ needs. This is one of the many things we have tested with customers,” a FedEx spokesperson said. The company declined to provide additional details about the feature nor would they even confirm that the term “Crosstrack” here actually means “non-FedEx” deliveries. But it’s hard to imagine another use case for having two tabs in the app’s tracking section — only one of which is labeled “FedEx” — for any other purpose. (We gave FedEx the opportunity to correct this description of “Crosstrack,” and they declined to say anything more beyond their statement.)

The development, if as described, would be interesting, as it represents the competitive pressure Shopify is having on the wider industry. As e-commerce booms, in part thanks to consumer shifts prompted by the pandemic, the ability to track all packages in one app has become a key selling point for Shop. The Shopify app today is now No. 4 in the Shopping category and has a noteworthy 4.8-star rating across some 3 million reviews, which speaks to consumer demand for this sort of offering. FedEx would do well by serving its audience with a similar feature.

It’s worth noting that FedEx, like most major companies, tests many new product experiences, and only a subset of those actually make their way to the public. In this case, the Crosstrack product is considered a “concept” that FedEx is testing, we understand, but it’s not one that the company is ready to announce in terms of a public launch.