As an interactive storytelling platform, Dorian is building a new way for writers to make money off of their fiction by turning their tales into choose-your-own-adventure mobile games. As users navigate the free-to-play app, they can spend in-app currency to unlock alternative story routes, directly putting a cut of the payment in the author’s pocket.

Today, Dorian announced that it raised a $14 million Series A round led by the Raine Group with participation from March Gaming, VGames, Gaingels, Graham & Walker and London Venture Partners, where Dorian co-founder and CEO Julia Palatovska was once an investor. Before that, she spent seven years at G5 Games, where she was Head of Business Development & Licensing.

“I spent about two years investing in some early-stage startups, and I was very inspired and itching to go back into building, which is how the idea for Dorian came together,” Palatovska told TechCrunch. “I think the biggest inspiration and the idea here is, how can we enable more people to participate in the games industry?”

Available on iOS and Android, the no-code app allows anyone to turn their stories into interactive games, even if they have no experience with game design. Instead of publishing a short story, where writers are usually awarded a flat fee (or no pay at all, for smaller markets), Dorian offers a more continuous revenue stream. But the trade-off is that nothing is guaranteed, especially on an emerging platform.

But Palatovska is optimistic about Dorian’s potential to support creatives.

“We have around 250 monetizing creators, and that’s growing quite fast compared to most creator platforms, where it takes years to start monetizing,” she told TechCrunch. “I think that’s exciting in light of this round, because we can reach significantly more creators, and fans who will be willing to support them. In terms of revenue, top creators are currently making around $15,000 in annualized revenue. We have a couple of creators who already started making Dorian their full time job, and this is just the beginning.” 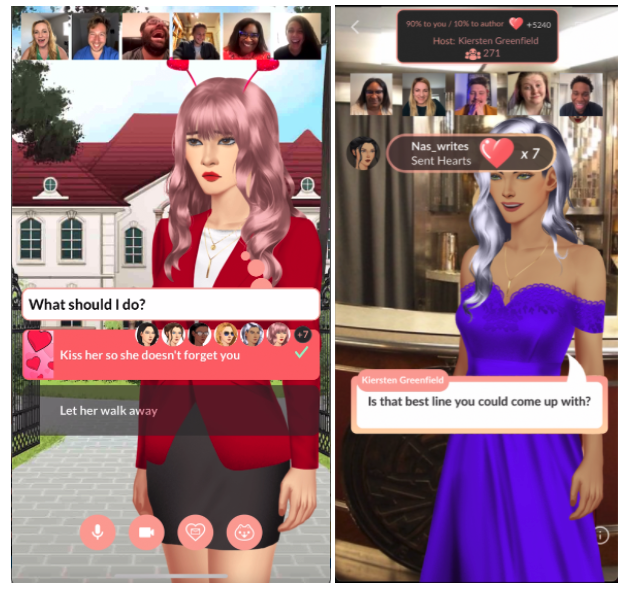 Dorian is similar to Episode, a viral interactive storytelling app produced by Pocket Gems. But on Episode, in order to monetize, writers need to accumulate at least 500,000 reads in a 60-day period, which is no easy feat. Dorian has no readership requirements before a creator can start monetizing. Any user over the age of 13 can monetize on Dorian through Tipalti, the same payout provider that Twitch and Roblox use.

When a reader makes an in-app purchase to follow a paywalled route on a story, the payment is split 50-50 between Dorian and the author. But Dorian is different from other platforms (and the online fan fiction market more broadly) because creators are encouraged to make fan works from stories that already exist on Dorian. This is because of the creator agreement that writers sign before publishing a story on Dorian — writers retain their own IP, Palatovska said, but they can also give permission for their stories to be iterated upon by other users.

Fan-fiction writers tend to be on high alert any time monetization of their works is brought up. Last year, Tumblr users lashed out against the platform because they suggested that bloggers might paywall their fan art with its new subscription feature. Fan creators can also be skeptical because, historically, they’ve been exploited.

In 2006, a platform called FanLib raised $3 million in venture capital to launch a platform where copyright owners could host fan fiction contests to boost excitement among fans. But FanLib required submitters — even those who didn’t win the contest — to forfeit the rights to their work, allowing it to be used for commercial purposes (the platform was sold to Disney and shut down two years later). Then, Amazon’s Kindle Worlds tried another version of this, authorizing self-published writers to create stories in licensed fictional worlds if they gave up a cut of sales. It didn’t work either.

Dorian is targeting a different market — it’s not about writing “Harry Potter” fan fiction, but rather building off of the stories of peer writers on the platform while helping the original authors retain some financial stake in the derivative works they inspire.

“Dorian owns the technology, but the creators keep ownership of the IP,” Palatovska explained. She said that if someone posted an original story on Dorian, and then down the line, the author decided that they want to publish a novel that draws from their Dorian story, that would be allowed.

In select cases, writers can monetize fan fiction based on more popular works — Dorian worked with Lionsgate to license the “Blair Witch Project” for a limited-time event last October. But, for example, if someone tried to profit off of “Supernatural” fan fiction on Dorian, that wouldn’t fly, since the IP owner hasn’t licensed that content to Dorian.

“The majority of creators on the platform have been writing fiction and fan fiction for years, and they have never monetized anything,” Palatovska said.

When a fan wants to tell a story based on a game originally published on Dorian, the original author would be able to choose what percentage of royalties to give to fan writers if their derivative stories make money. As long as these derivative creations exist within the Dorian ecosystem, it’s fair game. Still, if a fan writer were to take their derivative works outside of Dorian to monetize them, that’s where they might run into legal issues.

Dorian offers an additional monetization option through livestreaming. Users can livestream themselves playing their own story to generate hype, or they can play through another user’s story (again, the original IP owner could decide the royalty split).

Though the livestream feature helps creators develop an audience, it’s a bit of a bold move for a relatively new app with a small team. The app, rated for ages 12+, has a predominantly Gen Z audience, and if content moderation tools aren’t in place, something can go wrong very quickly.

“We’re new, so [content moderation] is definitely something that is on our minds,” Palatovska said. “We are very happy and lucky to have an extremely well-behaved and collaborative community. It’s nearly 100% female, including the streamers, so we have never had any issues yet. Of course, as we are growing, this might happen, but we’re building some protections.”

Currently, hosts can kick people out of their streams if they misbehave, and viewers can report harmful users. Dorian also has its own human moderation team that helps out when possible.

With its new infusion of capital, Dorian plans to grow its team and license IP to host more in-app events like its collaboration with Lionsgate. But as the Ukrainian founder grows her company from San Francisco, she is also coping with the brutal attacks on her home country and trying to help her family, who remain in Ukraine.

Many tech startups are helping support Ukrainian refugees, but Palatovska’s connection to the conflict is deeply personal. Dorian donated $10,000 to the Ukrainian Army and an additional $10,000 to the 1K Project, which helps families impacted by the war. It’s estimated that over 3 million Ukrainians refugees have fled their country since February 24, and as Dorian creates more roles, the company said it will proactively seek out talent who fled Ukraine or want to relocate when it’s safe to do so.

Inside the Realms of Ruin