According to data collected by Carta, a unicorn startup that provides equity management and other services to private companies, round sizes from the Series A to C stages in the United States are in decline, while valuations attached to those deals are also falling. For investors hunting for a deal, the pricing reprieve may be welcome. For founders hunting up their next capital tranche, the news could prove less desirable.

We’re mere weeks away from the conclusion of the first quarter of 2022, which means in short order we’ll get a deluge of data concerning the domestic and global venture capital market’s performance at the start of the year. But while aggregated data is useful for charting larger and slower-moving trends in the startup market, we care more this morning about near-term changes.

This is for investors putting capital to work now, and startup founders looking to close a new round in short order.

We’re only discussing the U.S. market today, where Carta has the most data and thus the strongest perspective. However, we’ll continue to hunt for data of this sort from the company and its peers as the year progresses. Now, into the data.

How Series A, B, and C rounds are changing in the United States

Let’s start with capital raised per round. 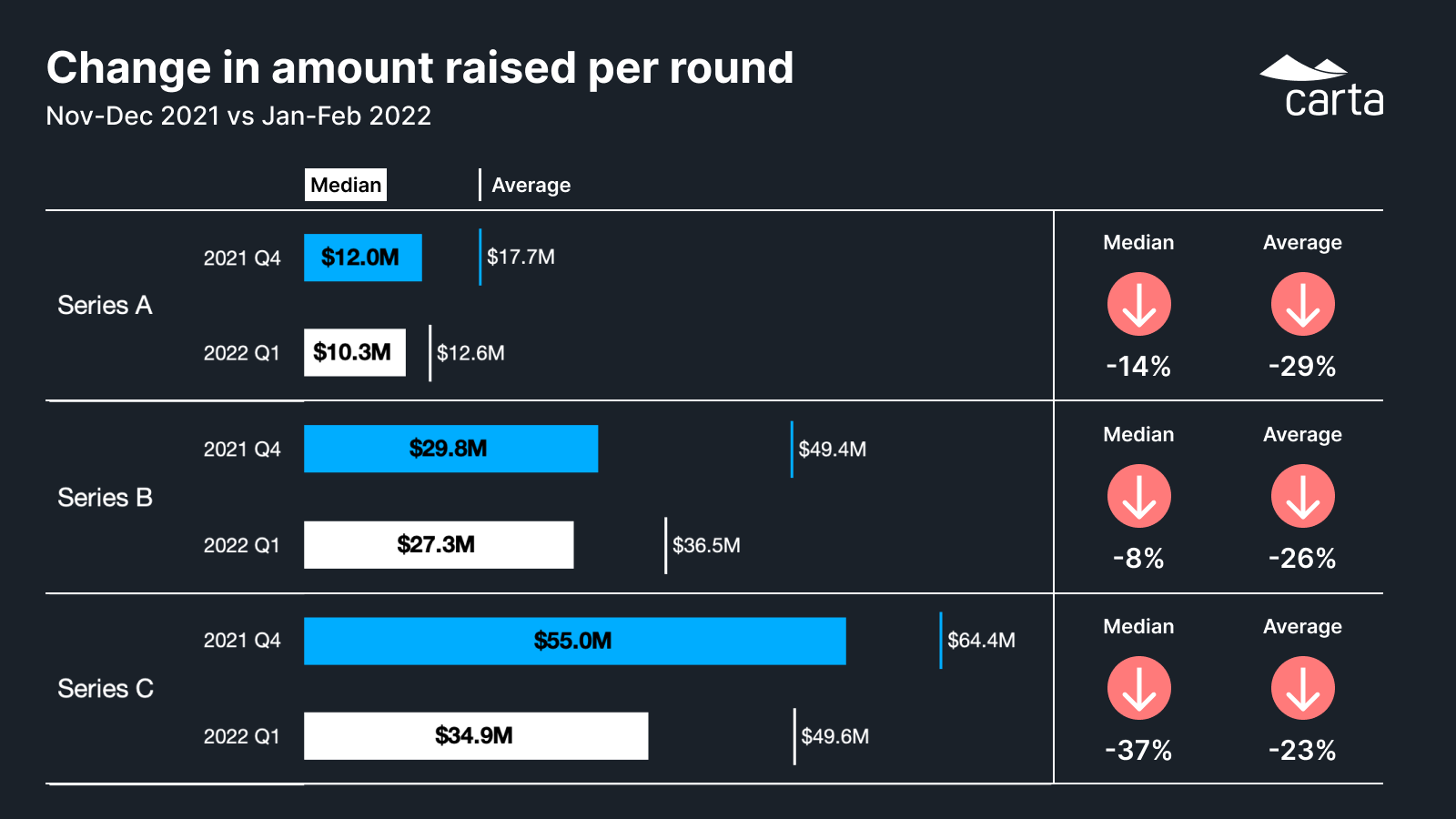 Note that we’re contrasting the final two months of 2021 with the first two months of 2022, not full quarters. Also, Walker confirmed to TechCrunch in an interview that the above data is based on closing dates, not announcement dates, so we’re not mixing rounds from different periods that would pollute the dataset.

From November and December 2021 to January and February 2022, Series A rounds posted the largest average decline in round size in the United States. This indicates that outlier Series A rounds — in size terms — are becoming less frequent. That the median Series A round also declined likely stems from similar reasons, even if it does belie a less extreme decline than what averaged results detail. Still, Series A rounds on both a median and average basis in the starting months of 2022 remain over the $10 million mark. Slowdown or not, the market is still hot.

Series B round data is similar, with a sharper average decline than median round-size shift. An even smaller median decline, however, than we saw with Series A rounds means that the Series B market is changing, but not as much for most companies raising. Series C data is more extreme, with round sizes falling more sharply in median terms than average, implying that outlier rounds at the venture stage are changing, but that we’re seeing more movement among smaller deals than with Series A and B rounds.

Turning to valuations, the data here is similar, with one particular caveat. From the same source: