Bazaar is attempting to build what it calls an “operating system for traditional retail” in Pakistan. It’s a $170 billion market that comprises 5 million small and medium-sized businesses and enterprises across the country.

But these merchants are largely unbanked and offline today. Banks and other formal financial institutions don’t extend credit to these merchants because they don’t have a credit score. This gap has forced many of these shop operators to take loans from shark loan providers.

For those following the South Asia coverage, this challenge will sound very familiar.

Business-to-business e-commerce Udaan, logistics startup ElasticRun, and Dukaan, a startup that is helping shops go online, as well as scores of startups and giants including Reliance and Amazon, are solving a similar problem in India.

Bazaar is combining many of these offerings.

The startup’s B2B e-commerce marketplace, thanks to its network of a dozen fulfillment facilities, is helping merchants in 21 towns and cities across Pakistan procure items to sell.

These merchants also use the startup’s Easy Khata app, which helps them maintain bookkeeping. Bazaar’s financial arm, called Bazaar Credit, is offering these merchants, many of whom operate neighborhood stores, with short-term working capital financing. 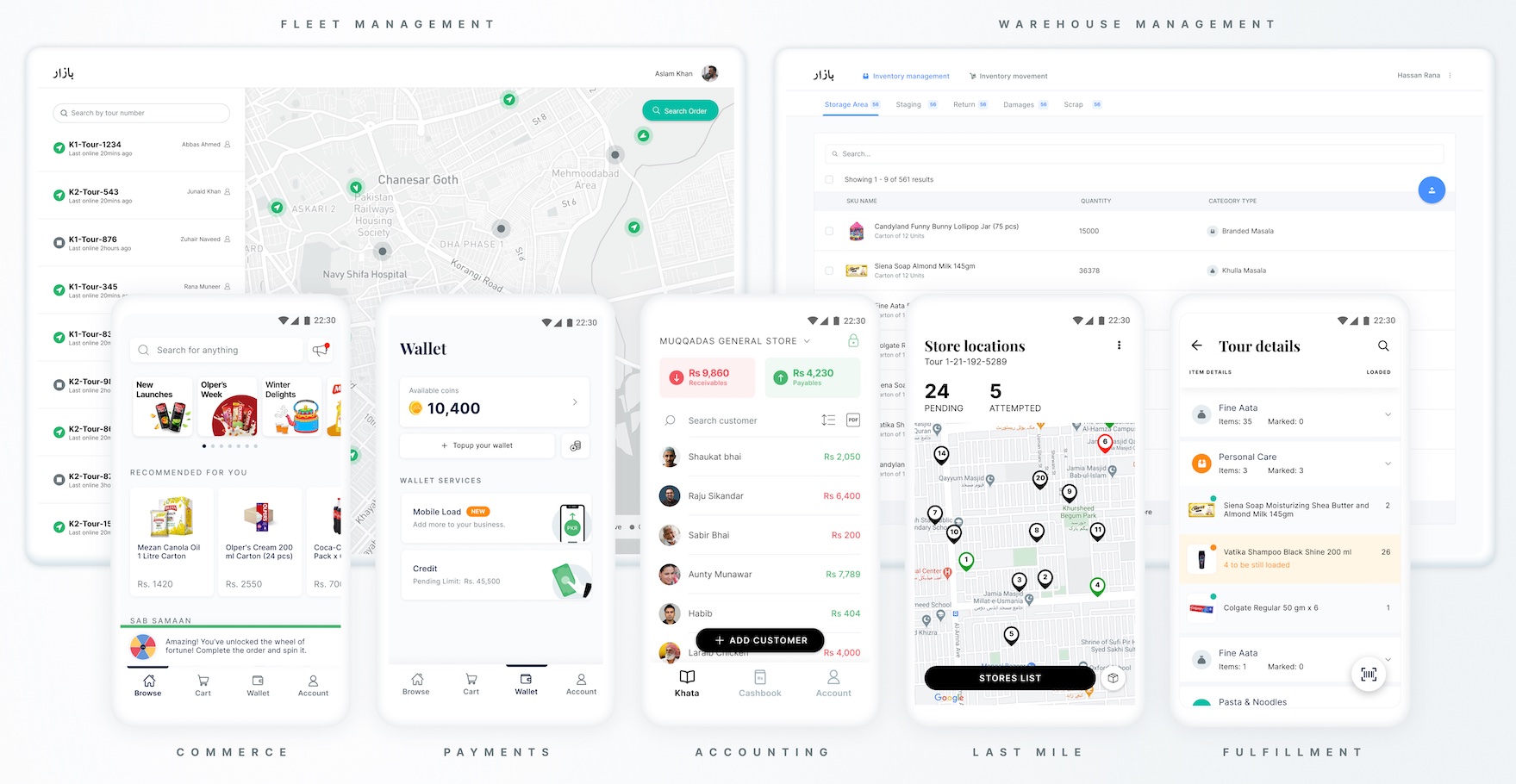 Piecing together many of its services makes sense for a startup like Bazaar in Pakistan because it enables the startup to offer a more comprehensive set of values to a merchant, and Easy Khata is helping the firm win customers, Saad Jangda, co-founder of Bazaar, said in an interview with TechCrunch.

In August, “we had just started piloting our credit product and at the time we had partnered with a third-party,” he said. “Now, our credit product is developed completely in-house and is digitally enabled that connects to our last mile network. Everything from order generation to credit disbursement to cash collection is done completely by Bazaar,” he said.

“We acquire customers through Easy Khata, funnel them through commerce, and once we have enough data on the merchants, we start building a credit product atop of it,” he said, adding that the startup has issued thousands of loans in recent months.

Easy Khata has amassed over 2.4 million registered businesses across 500 cities in Pakistan. “But more importantly, Easy Khata is serving as both a core system of records and also helping us launch in new cities,” he said.

Merchants have recorded over $10 billion in annualized bookkeeping transaction value on Easy Khata, the startup said. “Our expansion within Pakistan in the last few months is a testament to how crucial Easy Khata is for us,” Jangda said.

The startup’s last-mile network, which was operational in just two cities in August of last year, is now adding three to four cities each month.

“The goal is to keep building for Pakistan. We want to cover more than 100 urban and rural centres across the country and build the largest network in the country so that we can move any category of goods from point A to B whenever and wherever is needed.”

The startup plans to deploy the fresh capital to expand to more cities across Pakistan and launch new marketplace categories. It is also working to scale its lending offerings and explore new product lines.

Childhood friends Jangda and Hamza Jawaid reconnected in Dubai a few years ago. At the time, Jawaid was at McKinsey & Company, while Jangda was working with Careem as a product manager for ride-hailing and food delivery products. The opportunities they saw in their home nation drove them back to the country to build Bazaar.

“We are thrilled to support Bazaar’s vision of building an end-to-end commerce and fintech platform for millions of unbanked and offline merchants in Pakistan,” said Christian Jensen, partner at Dragoneer Investment Group. “Bazaar’s pace of geographic expansion and new product development is a testament to the rare talent and culture Hamza and Saad have cultivated at Bazaar.”