Public came to the market’s attention during the 2020-2021 savings and investing boom, a period of time that elevated Robinhood and Coinbase to the public markets. Public, initially built along similar lines to Robinhood, has pivoted away from payment-for-order-flow (PFOF) incomes, added crypto to its service and broadened its board in recent months.

The mix of product and corporate decisions appears to be working for Public, at least in terms of leading indicators. According to co-CEO Leif Abraham, Public now has 3 million users. The company also announced this morning that it has purchased Otis, a startup that allows consumers to buy and trade fractional shares in individual alternative assets.

What sort of assets? Otis founder Michael Karnjanaprakorn gave TechCrunch a few examples of assets that his company makes available to its user base, including a shoe from a famous basketball player that has a piece of backboard embedded in it (the star player shattered the board in a game) and richly valued NFTs.

The purchase price of Otis was not disclosed, but given that the smaller company had raised $16.5 million before its sale, per Crunchbase data, we’d estimate the transaction’s value at mid-to-high eight figures, probably weighted toward stock over cash.

But more to the point, why is Public buying Otis? And how does it fit into Public’s non-PFOF future? That’s what we wanted to figure out. Let’s talk about it.

Otis calls itself the “stock market for culture,” which is a pretty good tagline as far as such things go. The company’s service scaled to 100,000 users, per Karnjanaprakorn, and 125 listed assets before it sold to Public.

How does Otis work? The company takes individual goods public in what is called a Reg A+ offering, or a sort of IPO lite. From there, its users can buy and sell stakes in the goods. 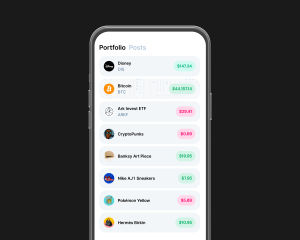 What Otis assets may look like inside Public. Image Credit: Public

Sometimes, the underlying asset is bought out wholesale by an individual or entity. In those cases, Otis works to make sure that the bid is real, and then allows owners in the asset to vote on a potential sale. As with all public-market M&A, a premium is usually involved.

All this is neat, yes, but where Otis gets even more interesting is in its business possibilities for its new parent company. It gets paid when an asset is listed, and when users trade shares in the item. Per Abraham, this will work out to 5% in the listing of an item and a 2% cut of secondary trades.

For Public, which essentially decided to blaze its own path in zero-cost equity trading by turning away from PFOF incomes, adding a business unit that has a transactional revenue model means that its own revenue base will expand. And if Public can help Otis list more assets and get its users aboard the alt-asset train, alt-asset transactions could grow into a material income stream. (Public has other plans coming, Abraham said, hinting that something that rhymes with slubskripshlun is on the way this year.)

Karnjanaprakorn thinks that Public’s growing user base represents a real chance for Otis to expand the market for fractionalized asset listing and trading. And his new parent company certainly has raised a lot of capital, giving it financial power that Otis lacked, meaning that it may be able to list more total items, boosting in-market demand for the company’s product; Karnjanaprakorn said that what’s neat about the sort of product that Otis lists is that they come with their own fan base, so perhaps the smaller company will be able to juice Public’s own user growth.

TechCrunch is curious about the data side of the equation. If Otis and Public manage to list lots of alternative assets and generate a liquid market around them, they will have managed to create a stream of price data on what are normally illiquid assets. That will be valuable — if they can monetize it within normal privacy bounds.

That Robinhood has struggled since its IPO is hardly a secret. The company’s stock peaked at more than $80 per share before falling to $11.75 as of the close of trading Tuesday. This is at once a worry and a boon to Public. It’s never great when a public comp suffers if you are the private competitor. But Robinhood’s declines indicate that PFOF revenues that scale neatly with volume can hit reverse when underlying volume falls. And the stock market is famous for its ups and downs.

Public still has a road ahead of it to show that it can generate massive revenues from its own take on consumer trading with a community focus. More when we have it.