Agency banking is big business in Nigeria and sub-Saharan Africa. It involves agents or merchants, who act as human ATMs, offering financial services such as transfers, savings and payouts to the underbanked and unbanked that rarely visit bank branches.

Banks and telcos are heavy players, so are some companies like E-Settlement, a holding company for different financial entities. Founded by Olaoluwa Awojoodu, the company’s agent banking platform, PayCentre Africa, is present in Nigeria, Niger, Burkina Faso, Ivory Coast and Togo.

Last year, the company said it had over 5 million customers transact more than $2 billion from its network of 100,000 merchants. With this much firepower at his disposal, Awojoodu teamed up with Airende Ojeomogha and Garry Ottosen to start Yep!, a neobank that will leverage E-Settlement’s network and convert these underbanked customers online as well as target those online already.

Today, Yep!, a “financial super app” with payments, remittance and banking features, is announcing that it has raised $1.5 million in a pre-seed round led by pan-African VC Greenhouse Capital. The startup plans to go live across the five markets where E-Settlement is present, serving digital financial services to consumers, small business owners and merchants.

“We want to bank the guys in Lagos as well as bank the guys in a village at Ikot Ekpene. And at the same time, not just Nigeria, we are also looking at a full African play,” said co-founder and CEO Awojoodu to TechCrunch over a call.

In Nigeria, over 42 million adults who live in rural areas lack basic banking services. Agency banking does a great job in fostering financial inclusion, but at some point, the underserved need to be brought into an all-round digital ecosystem that provides access to the full spectrum of financial services.

The founders built Yep!’s solution with this in mind. Their first step was acquiring a microfinance license, a prerequisite for any fintech that wants to hold consumers’ money; in Yep!’s case, both agents’ and consumers’ money (something it couldn’t accomplish with E-Settlement). Thus, these agents can now offer cash in, cash out, digital accounts, cash issuance and bill payments.

“We can now start banking consumers because we now hold their money, and we can also bank our agents. So we kind of closed all the ecosystem, bringing agents and merchants, businesses and consumers all in one ecosystem,” said Ojeomogha on the call. 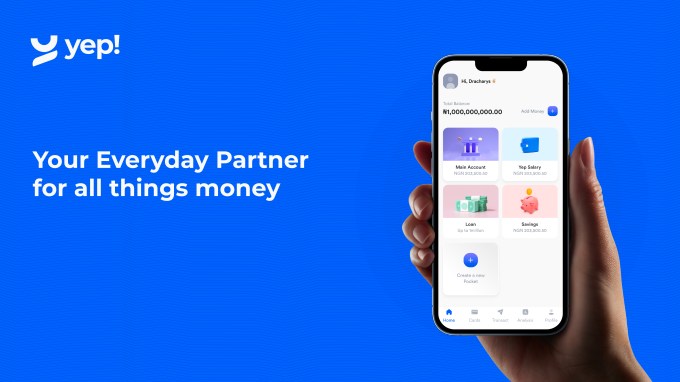 The San Francisco- and Lagos-headquartered startup will also go for customers who use banks and other digital-only platforms like Kuda, Carbon and FairMoney. It will provide account opening, debit card issuance, bill payments and credit financing services to these online consumers, and financial management services to both consumers and businesses.

But Yep!’s offline and online acquisition strategy isn’t exactly novel. OPay, known for providing financial services to underbanked customers, properly launched its digital banking arm in 2021 after converting millions of users it gained from a gamut of vertical services. TeamApt also teased a digital banking play for the underbanked last year; however, nothing concrete has surfaced yet.

What gives Yep! an edge, according to its founders, is a superior experience in raising debt capital for lending purposes — a practice where agency banking providers supply working capital to their agents who in turn lend to their end consumers. Ojeomogha and Ottosen will be pivotal to that.

Ojeomogha has experience as an investment banker and previously worked for fintechs like Oxygen and Tally in the U.S. Ottosen, on the other hand, has built lending programs, including consumer and business credit cards and small business instalment loans for several U.S. banks.

“We’ve offered agent lending in the past and got low single-digits default. We’ve taken a different approach to some of these things more strategically. Garry and I have raised hundreds of millions of debt, so access to credit facilities is an advantage for us, including the fact that we can raise those facilities pretty quickly,” said co-founder Ojeomogha.

“Another competitive advantage we have is we have a tonne of data,” added co-founder and board member Ottosen. “And I think one reason I was excited to come over is that I’ve spent years building credit sorts of models and helped build a couple of banks. We have a roadmap to start lending to our agents and because it’s a digital bank, we’ll be able to reach deep into both Nigeria and Francophone Africa.”

The company currently has a $500,000 credit facility to kick-start working capital loans to its existing merchants. The founders say they’re in discussions with international credit providers to increase this to $10 million by the end of 2022.

To further distinguish itself from similar platforms and materialize its super app plans, Yep! is testing out remittance products. Sub-Saharan Africa remains the most expensive region to send money to, with remittance inflows reaching $45 billion. Yep! sees an opportunity in building on remittance flows where agents act as the middlemen in receiving money from the diaspora and distributing it to those on the continent. More on the diaspora play, the startup also plans to offer checking and saving accounts, a credit card and a physical bank for African migrants.

But that’s all in Yep!’s pipeline. For now, Yep! intends to use the pre-seed investment to double its agent network to over 200,000 by the end of 2022 as part of its goal to boost financial inclusion. The funding also provides ammunition to commence its digital banking services in Nigeria and the other four countries, which the founders believe is ripe for the taking since there’s less competition compared to Africa’s most prominent fintech market.