Instagram announced Tuesday that it would implement steps to dampen Russian government propaganda and protect the privacy of users across Ukraine and Russia.

The company will begin downranking posts from Russian state-affiliated media, placing any stories from those outlets below other content from other sources. Users who go to share stories originating with any of these accounts will now see a pop-up message cautioning them against spreading “Russia state-controlled media.” 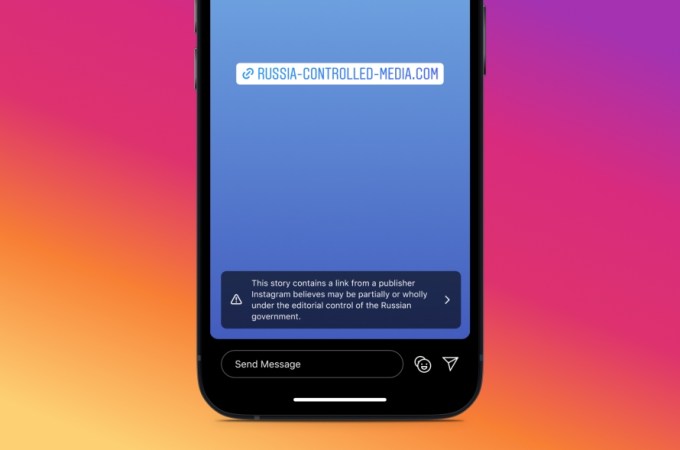 Users who share stories with link stickers pointing to domains associated with Russian state media will get the same treatment. Content from Russian state-linked accounts will also no longer appear in Instagram’s algorithmically populated discovery areas, like Reels and the discovery tab, and Instagram says that it also won’t show up as readily in search either.

Instagram’s efforts to stem the flow of state-backed disinformation about the Russian invasion of Ukraine follows Facebook’s own parallel efforts. Facebook announced last week that it would similarly attempt to bury Russian state media through the use of warning labels and downranking. At the time, Meta Head of Security Policy Nathaniel Gleicher said the labels were on the way “in the days ahead.”

Instagram is also adding a new privacy measure for some users based in Ukraine and Russia. Now, private accounts based in those countries will have their following and follower lists private and their mutual friend lists hidden, adding a layer of protection that obscures real-life social connections.

Instagram and Facebook parent company Meta previously announced that it would make encrypted DMs available to all adult users in Ukraine and Russia and make it easy for accounts in those countries to bulk delete content and activity.