Having held the positions of CFO at digital lenders OnDeck and Better.com, Howard Katzenberg experienced firsthand just what a lack of visibility into company spend could cost an organization.

After spending three weeks analyzing spreadsheets at one point, Katzenberg and his team were able to identify $1.5 million in potential savings on about $12 million to $15 million of revenue run rate. That was money, he said, that could have gone toward one or two months of marketing to grow the business or hiring several engineers.

“After 10 years of being a CFO, I got fed up with my constant lack of visibility into vendor spend,” he told TechCrunch, “and recurring challenges my finance teams had in identifying where we were overspending.”

“Most of my time as a CFO was spent on the growth and revenue side of business, but once a year, I’d gather my finance team to do a manual audit of our vendor spend,” Katzenberg recalls. “We’d print out several months of invoices, and go vendor by vendor, and invoice by invoice to identify line items. Inevitably, we would find lots of what I call spend leakage. And that is just cash that is silently walking out the door that no one realizes.”

So, months after leaving his role at Better.com in 2019, Katzenberg set about coming up with automation technology that would help address those challenges for CFOs everywhere. In early 2020, he launched Glean AI, a startup which aims to help businesses save money by using machine learning to analyze things like deal terms, line-item data, redundant offerings and negotiation opportunities.

And today the startup is emerging from stealth with $10.8 million in pre-seed and seed financing from Contour Venture Partners, Infinity Ventures (from the team that led PayPal Ventures), B Capital, Portage Ventures, Amex Ventures and other prominent venture funds and fintech angels, it tells TechCrunch exclusively. About $3 million of those funds were raised in February of 2020, according to Katzenberg, with “just a team and a PowerPoint presentation.” Contour led both its rounds.

Corporate spend has been an increasingly crowded space as of late, with players such as Brex and Ramp introducing cards to help companies keep up with expenses. Also, Bill.com exists to help companies well, pay bills. Glean AI says it wants to take things a step further with automation that it says will give companies a way to pay invoices faster and reduce manual work while also analyzing line-item data. That analysis, according to Katzenberg, can provide companies with valuable insights and provide more context around their spend.

For example, he said, it can uncover when a company is subscribing to a service it no longer uses or was provided a trial subscription for but doesn’t need and identify missed opportunities to cancel a relationship or negotiate a renewal to get better pricing. It also picks up on redundant vendors or incorrect pricing on bills.

“By breaking invoices down by what was purchased and how much it cost — rather than just the total amount spent — we can understand trends, purchasing behavior and the opportunity for savings,” Katzenberg added. “With this information, we use algorithms to proactively identify areas where money is being misspent — such as excess licenses or incorrect pricing — as well as opportunities to help negotiate better deals with vendors based on our aggregated benchmarking data.”

As such, he describes Glean AI as a “strategic Accounts Payable (AP) platform.”

“We’re building not just a front-end product to support these finance teams, but also an accounts payable product that can manage payments,” Katzenberg told TechCrunch. And as part of its emerging from stealth, the company is also launching international payments. 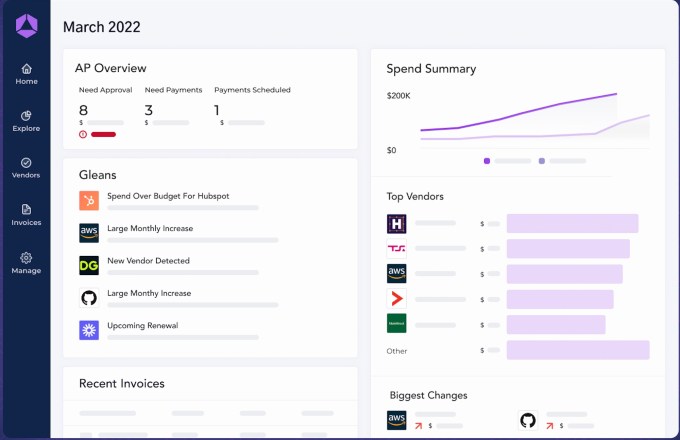 So far, Glean has customers such as Orum and Alloy, among others.

Its typical client is a Series B and Series C company that is growing 100% year over year, with a small finance team, Katzenberg noted.

“They are maybe getting increasing pressure from their board to put better financial controls in place for more visibility and performance,” he said. “And now especially, I think there’s a lot of scrutiny just around burn rates and extending runway given market volatility.”

While some of Glean’s first customers are in the fintech community, largely because of Katzenberg’s network, he believes that “any business can benefit from Glean, especially those focused on cash flow rather than driving top line growth.”

Glean plans to use its new capital to continue to focus on product and engineering as well as build out its go-to-market strategy.

“We invested in Glean because they make it easy for businesses to dig into their invoiced spend and uncover potentially wasteful spend,” said Amex Ventures Managing Director Margaret Lim. “Using Glean, businesses can optimize their vendor spending in a way that has not been possible before.”

Matt Gorin of Contour Venture Partners said he worked closely with Katzenberg when he was CFO at OnDeck, which he helped take public in 2014 and thus, his confidence in the founding team is “extremely strong.”

“There are many businesses in the accounts payable space, and they are largely focused on making payments faster and easier, but not intelligent,” he told TechCrunch. “Glean AI considers fast and easy table stakes. The magic is that they are able to surface insights through their technology that actually saves customers money and the platform enables finance teams to play a more strategic role within their businesses.”