Twitter said it’s expanding access to Birdwatch, its community-based fact-checking initiative first revealed in October 2020. The service so far has been tested by a small group of 10,000 contributors who have invested time in writing and rating notes to add more context to tweets that could be potentially misleading. The company, however, isn’t opening up Birdwatch to more contributors, but rather will make those notes viewable and ratable by more U.S. users.

Starting today, the company said “a small and randomized” group of U.S. Twitter users will see the Birdwatch notes directly on tweets, and will be able to provide input by rating the note as “Helpful,” “Somewhat,” or “No” and indicate why they’ve answered as they did. These signals will help Birdwatch to improve.

The original idea behind Birdwatch was to create a system for fighting misinformation on the platform at a much faster pace than what’s possible today by reporting tweets to Twitter for review.

As Twitter explained when the service officially launched into pilot testing in January 2021, misleading information can quickly spread online, and the Birdwatch notes could provide added context in a more immediate fashion. Plus, the notes could help address concerns with problematic tweets that users would otherwise report to Twitter for takedown but didn’t actually break the rules. And they could enhance tweets that are perhaps factually true but lacking context that could provide a clearer picture of the matter.

The timing of Twitter’s announcement comes only days after a report by The Washington Post criticized the company for having failed to launch the Birdwatch service more publicly over a year after it first debuted.

In the time since the pilot began, Twitter has frittered around with all sorts of other projects designed to grow revenue, including a set of creator tools (Super Follows), e-commerce features, a subscription product for power users (Twitter Blue), newsletters (Revue), NFT avatars, in-app tipping, live audio (Twitter Spaces), and more.

But as the Russia-Ukraine war rages, better (or at least faster) fact-checking is in greater demand than ever due to the spread of misinformation and propaganda across social media. In a comment to The Washington Post, Twitter said it would expand the Birdwatch pilot “very soon.” In other words, the timing of today’s announcement is not a coincidence.

During its earlier pilot phases, Twitter made improvements to Birdwatch, including offering contributors auto-generated aliases to keep them protected from abuse and notifications that let them know when their notes were rated helpful or elevated. To be shown on a tweet, notes must first be rated by enough Birdwatch contributors from different perspectives, the company said. Twitter also added in-app prompt reminders to encourage contributors to include their sources and make their explanations clear and introduced a “Needs Your Help” tab for Birdwatch participants to rate notes in need of more feedback. 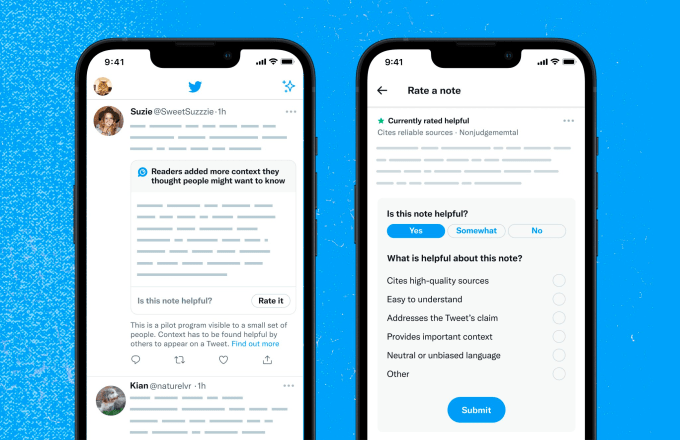 Last summer, Twitter announced it would work with AP and Reuters to help it fight misinformation on its platform, which also included helping to assess the Birdwatch contributions.

In a survey, Twitter found that people were 20% to 40% less likely to agree with the substance of a potentially misleading tweet after they viewed a note about it, compared with those who didn’t see the note.

Although Birdwatch notes may become visible to a small number of users starting today, it’s far from being a public launch. The program is still considered a “pilot.”

There also continues to be the question as to whether community fact-checks are even the right approach to handling misinformation, given that Birdwatch contributors aren’t necessarily trained fact-checkers, journalists or subject matter experts of some sort. (Plus, even those who are subject matter experts in one field can’t necessarily be counted on to properly assess misinformation in another.) Instead, requirements state they must simply have a verified phone number, a trusted U.S.-based phone carrier and no recent Twitter violations.

Then there’s the issue with how critical some fact-checks are compared to others, and whether tucked-away notes are the right way to bring the truth to light. For instance, while it’s good to know that the person identified as Mark Hamill in a GIF posted by a meme account is probably just a talented cosplayer, it’s quite another thing when a verified former prime minister of Sweden and diplomat tweets a misleading photo from the Ukraine-Russia war.

Twitter declined to say how many U.S. users will now see the Birdwatch notes and be able to rate them, or even what percentage of Twitter’s U.S. userbase that represents.