Facebook attempted a return to its roots as a college-focused social network with the fall 2020 launch of Campus, a private section within Facebook that was only open to those with an @.edu email address. However, the initiative didn’t succeed, as Facebook is now alerting users that Campus will fully shut down on March 10.

Through an in-app message, Facebook is informing users that its Campus pilot will close down and that Campus profiles, groups, posts and other data will be deleted. Ahead of its shutdown, users will be able to view their data and download it using an export tool, the message noted.

“Since we launched the Campus pilot, it’s been our mission to help bring college communities closer together. But we’ve learned that the best way to support students is through Facebook Groups,” the message explains.

Social media consultant Matt Navarra told TechCrunch he had been alerted to the closure by several Campus users and posted a screenshot of the message to Twitter. Other Campus users had also noted the planned shutdown and the accompanying plans to delete the data. But very few had commented on the loss — an indication, perhaps, of Campus’ lack of traction.

Facebook is shutting down its Campus feature on March 10 pic.twitter.com/DUCmVu9Eup

Originally, Facebook had presented Campus as a way to appeal to make the social network appealing to younger people by offering college students a private place where they could connect with classmates, join groups, learn about upcoming campus events, get updates from their school’s administration, and chat with others.

With the arrival of the COVID-19 pandemic, there was also a sense that Facebook could potentially capitalize on the fact that many students had shifted to virtual learning to drive adoption of its online college network.

However, Campus was not offered as a fully separate app — it was accessible from the “More” section alongside other Facebook verticals, like Watch, Dating, Gaming, News and others. This may have made it feel more like a part of Facebook itself, rather than a truly private network. 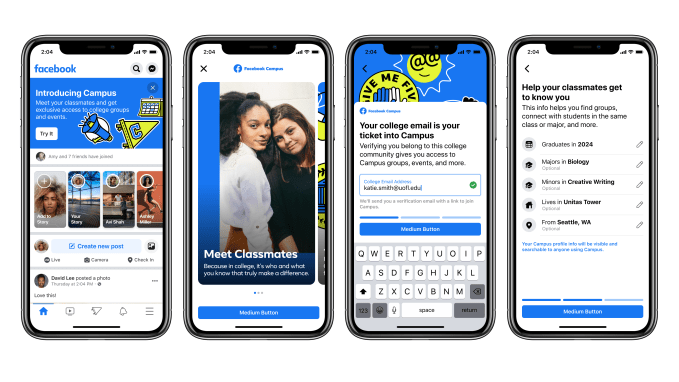 Facebook had marketed the feature on its platform — sometimes too aggressively, users complained. One Twitter user in 2021 remarked how they were being pushed to join Campus, even though they were faculty, not a student, for instance. As of mid-2021, the feature had become available to 60 total U.S. colleges and universities, after 30 more schools were added to the service. And even as early as this January, Facebook Campus expansions were underway as local outlets were reporting school additions, as with UNC Charlotte, for example.

Currently, the pilot program has 204 schools on board, Facebook told TechCrunch.

A company spokesperson noted the original idea for Campus came about because students were already using Facebook Groups for their college, and Facebook wanted to explore if a dedicated product could better serve this use case. But ultimately, Facebook realized Groups worked better.

The spokesperson also confirmed the decision to shut down Campus, noting:

We’ve decided to end our pilot of Facebook Campus. We learned a lot about the best ways to support college students, and one of the most effective tools to help bring them together is Facebook Groups. We’ve notified students in the test schools that Campus will no longer be available, and have suggested relevant college Facebook groups for them to join.