The highlight of his career, he says unequivocally, was during his time at Instacart when he launched the ability for Americans that are on food stamps, or take part in the nation’s EBT SNAP program, to be able to pay for groceries with those food stamps. At the time, Lavian served as Instacart’s head of product for payments and was instrumental in building the company’s core payments infrastructure. Besides his work in making it possible for Instacart users to pay for their groceries with food stamps, he also helped build the infrastructure for Instacart to be able to accept payments via PayPal, Instacart gift cards, prepaid cards and a co-branded credit card with Chase that is slated to be released later this year.

It wasn’t until 2018 that the USDA — which oversees the SNAP program — started a pilot for retailers to be able to accept food stamps online, with Instacart being one of them. During the pandemic, the need for such an ability became heightened as more people shopped online and more people had to rely on government assistance to purchase groceries. Also, in general, many SNAP recipients are homebound, lack transportation or live somewhere without easy access to grocery stores.

The move by the USDA opened up opportunity. On an annual basis, the U.S. government distributes an estimated $3.7 trillion worth of social benefit programs through specialized payment networks. To help make it easier for grocers and other merchants to accept EBT payments, or food stamps, online, Justin Intal and Victor Fimbres in 2020 founded a startup called Forage. The company started with the mission of building the internet infrastructure for government social programs and essentially be “the Stripe for government-funded payments” through a unified API.

Meanwhile, at Instacart, Lavian was struggling because Instacart was using a legacy provider to be able to accept EBT payments.

“It took nine months to integrate with them,” he recalls. “It was long and complicated. And even when we launched, we were facing a lot of reliability issues with this provider.”

Then in September 2021, Nilam Ganenthiran, an investor in Forage and president of Instacart at that time, introduced Intal to the executive team at Instacart. Lavian was immediately impressed.

“It reminded me a lot of the Stripe founding story, which is that Stripe was not the first place on the internet that accepted credit and debit card payments. There were other ways to do it before,” he told TechCrunch. “However, Stripe just made it incredibly easy, reliable and had best in class technology, and that’s exactly what Forage is trying to do for government-funded payments.” 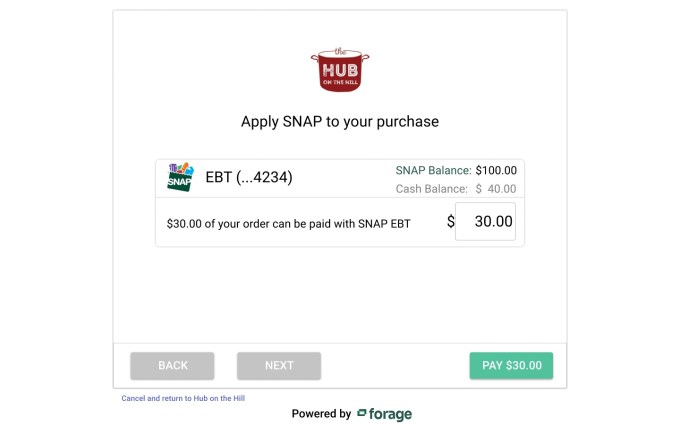 It was during his discussions with Forage that Lavian realized that he and CEO Intal had a shared passion for wanting to help an underserved population that has struggled with food insecurity.

“When I looked at all the places on the internet that people couldn’t use these funds, I realized that this was going to be my calling,” Lavian said.

For Intal, the connection too was immediate and strong.

“We realized we had the same bond of what we wanted in our lives,” he said. “We have talked every day since we met in person in October and it wasn’t my intention originally to have him join Forage. But then we realized it didn’t make sense that we weren’t working on this problem together.”

And so, earlier this month, Lavian left his role at Instacart to join Forage as its chief operating officer, or COO.

“Instacart was a job that I absolutely loved. I can’t think of a more formative time in my career,” he told TechCrunch in an interview that took place on his first day on the job. “But I couldn’t be more thrilled to help Forage in its mission to help grocers navigate the complex process of gaining USDA permission to accept EBT SNAP payments online.”

While the process could previously take 12-18 months, the startup claims that its technology can help grocers start processing EBT payments in one-third the time. Besides an in-house team of “payments and EBT experts” and a software platform, the company has built relationships with e-commerce platforms such as Shopify and Flashfood to accelerate the process.

Intal believes Lavian is joining Forage at “a very critical period” in the company’s growth.

“His expertise in the payments space from working at tech leaders like Instacart and Uber will help fasttrack our product development and partnership plans,” he said.

Since its inception, Forage has raised just over $3 million, $2 million of which was raised after participating in Y Combinator’s summer cohort last year. Investors include Hustle Fund and YC Continuity, among others.