New York-based Cala has announced the launch of its new Cala mobile app for fashion design and production. The company, which offers a digital fashion design interface to businesses and influencers, says the new app is designed to streamline the process of product creation and supply chain management.

Launched in 2016, Cala aims to provide fashion brands and retailers with an all-in-one platform that powers every step of the fashion design and supply chain process, while allowing for collaboration, designing, manufacturing and more. Cala’s partner network includes more than 60 factories in 13 countries and allows customers to connect with manufacturers that best suit their needs.

Cala CEO and co-founder Andrew Wyatt told TechCrunch in an interview that the product creation process in the fashion industry often begins with sketches, but after this step, everything else related to development and production happens on mobile. The company is releasing the new app with the aim of making development and production processes faster and easier. Cala’s new app allows users to view and create designs and collections and includes a tool that allows users to upload design inspiration and add contextual comments. Teams can also communicate with one another through the app via comments, photos and file attachments. The app also includes a notification center that is designed to only display important information and not bombard users with numerous notifications.

“The target demographic for the app is people that work at fashion brands,” Wyatt said. “We’re focusing on brands that are working on over $100,000 worth of product a year. That’s when we can come in and a take a team of three to five people or a team of 50 people and help them run their supply chain a lot more effectively.”

The new app is available to download on the Apple App Store. Wyatt noted that over 80% of Cala’s mobile web users are on Apple devices, which is why the company prioritized an iOS launch. The company does plan to launch the app on Android, but indicated that it doesn’t have an immediate timeline to share on that front for now. 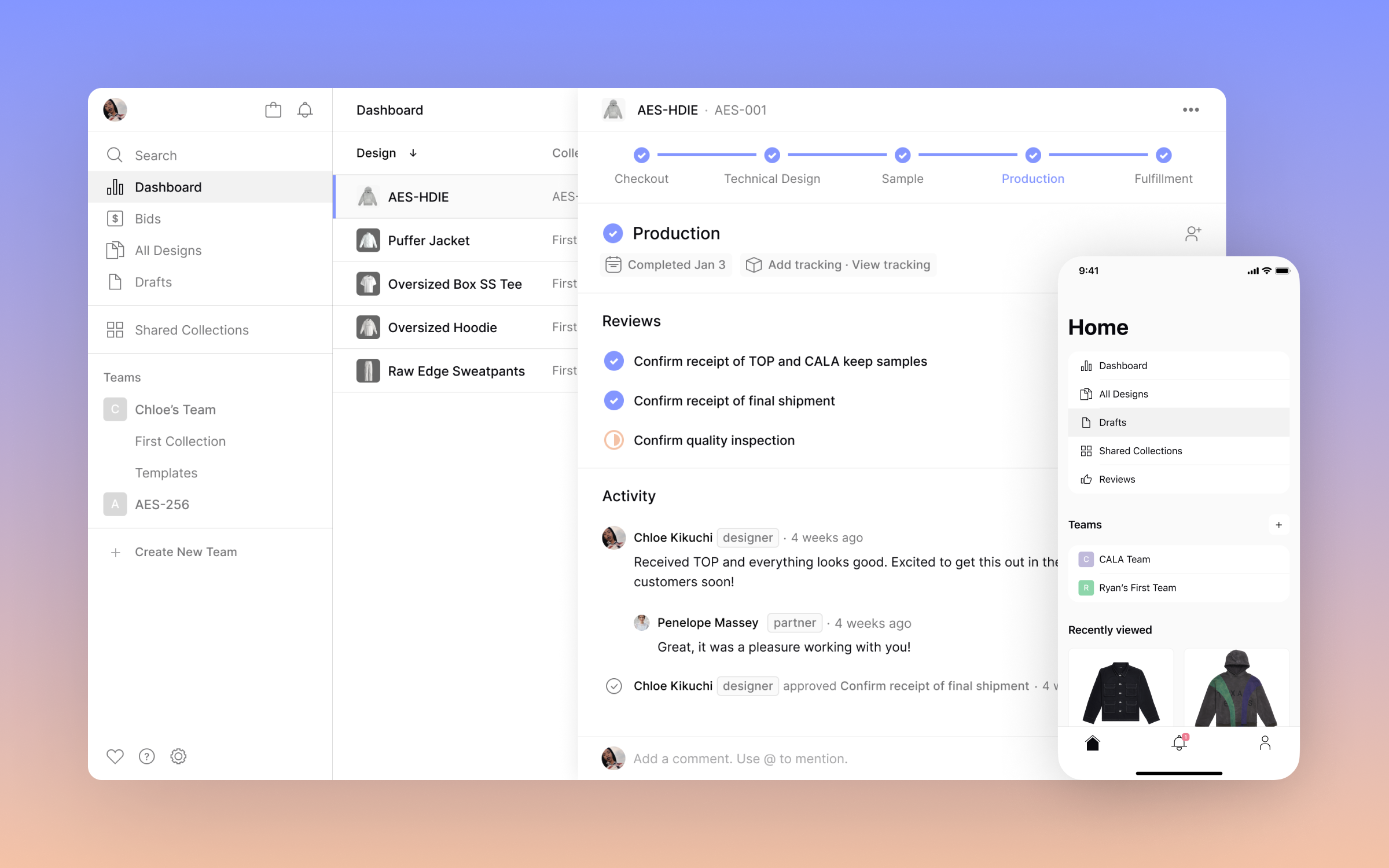 As part of today’s announcement, Cala also revealed that it’s adding 3D prototyping capabilities to its design process. The new feature will allow users to request 3D images of their designs in order to get a realistic view of the fit and materials. Cala says this feature will serve as a time-effective alternative to ordering samples and will also help finalize designs.

“Undoubtedly, the world is moving toward a 3D design and on-demand production world and I think we’re well-positioned to be on the forefront of that,” Wyatt said. “We’re also seeing a pretty clear future where you buy a physical product and you get a digital twin that you can use in the metaverse, so that’s another reason why we’re leaning into 3D design now. Right now, it saves time and helps brands be more sustainable on the developmental front.”

When Cala first launched, the company marked its foray into the market with its on-demand custom-fit 3D body scan system. Wyatt noted that since then, Cala has pivoted to focusing on being a core supply chain partner for fashion brands, as it started to work with small fashion brands and influencers over the past couple of years to create solutions that use technology to streamline the process of creating physical products and selling them to customers.