Ukrainians have turned to offline mapping and encrypted communication apps in the wake of the Russian invasion of their country, which is displacing millions who have left their homes to either fight back or flee to neighboring countries. According to data from app store intelligence firm Apptopia, over the past several days Ukrainians have been downloading various communication apps, offline maps and more where they can keep up with the latest news and information, like Twitter and streaming radio apps.

Currently, the top five apps in the country’s iOS App Store include the private messenger Signal, messaging app Telegram, Twitter and offline messengers Zello and Bridgefy. Elsewhere in the top 10 is WhatsApp; Maps.Me, an offline maps app that’s now ranking a half dozen spots higher than Google Maps, which has now just pulled its live traffic (info dubbed a security risk); and Starlink’s app from SpaceX — the latter which jumped up 39 spots after Elon Musk announced the satellite internet service was now active in the country. (Of course, to what extent the service is actually viable in the places it’s needed may be reflected in the app’s rank going forward.)

Among the top messaging apps, some saw greater adoption than others.

From the start of the Russian invasion on February 24, 2022, through Sunday, Februaru 27, 2022 Telegram topped the charts with 54,200 new installs across both the App Store and Google Play combined — a 25% increase from the same time period in January. Meanwhile, the offline messaging app Bridgefy saw the largest percentage increase in new installs, growing a whopping 4,730.8% month-over-month from just 591 downloads during the same period last month to now 28,550 new installs over the past few days.

Of course, not all messaging apps are created equally when it comes to security.

Signal is the most secure app, offering end-to-end encryption, with no data collected beyond an account creation date. Telegram, meanwhile, doesn’t offer end-to-end encryption by default, but it allows users to manually enable an encrypted “secret chats” feature. However, Telegram has been criticized by Signal’s founder Moxie Marlinspike for not being as secure as it claims, and those claims have been backed up by other security researchers and cryptographers over the years.

Recently, Marlinspike took to Twitter to again remind Ukrainians that Telegram was not secure, tweeting that Telegram is by default a cloud database with a plaintext copy of every message everyone has ever sent or received.

Every msg, photo, video, doc sent/received for the past 10 yrs; all contacts, group memberships, etc are all available to anyone w/ access to that DB

Many TG employees have family in Russia. If Russia doesn’t want to bother w/ hacking, they can leverage family safety for access.

Walkie-talkie app Zello is allegedly end-to-end encrypted in one-to-one and group conversations, but it’s worth noting the company had faced a security breach in 2020. The popular protest app Bridgefy, which relies on Bluetooth and mesh network routing, has also faced a host of security issues over the past years. The app spiked in usage during protests in Hong Kong, India, Iran, Lebanon, Zimbabwe and the U.S., but in 2020 was found to have serious vulnerabilities that led to it being dubbed a “privacy disaster.”

Though the company later rolled out support for end-to-end encryption, cryptographers who analyzed the app in 2021 found those fixes to be insufficient.

Outside of messengers, other apps that have surged in Ukraine in recent days include those for streaming radio and Twitter.

Typically, Twitter ranks No. 1 in the News category on iOS, but its Overall rank tends to be around No. 90-130. As of Sunday, however, it’s No. 4 on Ukraine’s iOS App Store Top Overall chart, up two ranks from the day prior, and it’s No. 28 on Google Play, up 15 ranks. On that day, Twitter saw around 7,000 more downloads on iOS and Android, a lifetime high in terms of daily downloads. 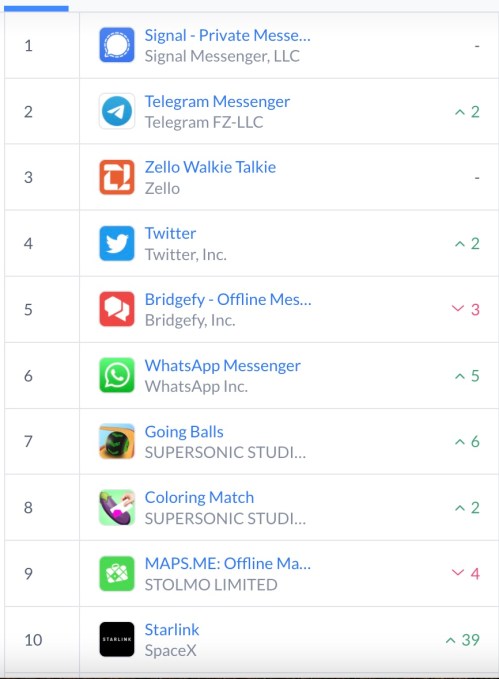 Streaming radio apps, Radios Ukraine and Simple Radio, have moved higher on the App Store as well, now sitting at No. 19 and No. 21, respectively. (Facebook is in between at No. 20.)

Signal, Bridgefy, Telegram and Zello are also in the top five here, but so is Briar, an Android-only peer-to-peer messenger offering end-to-end encryption. Offline maps app Maps.Me is No. 11, and another two-way walkie-talkie, called simply Two Way, is No. 15, followed by WhatsApp. 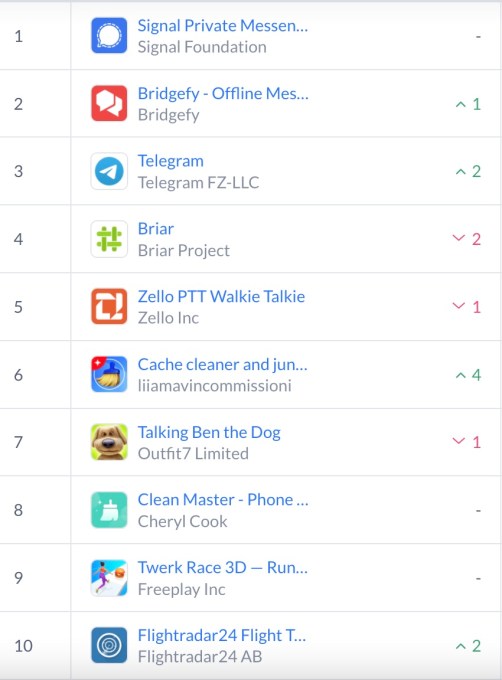 On both app stores, a number of games sit in the top charts as well — likely downloaded to entertain the kids while families hide in makeshift bomb shelters or travel long distances to safety.

Elsewhere in the world, the Russia-Ukraine war is driving other apps to the top charts, Apptopia also noted.

In the U.S., news apps CNN and Fox News both spiked in recent days, while The Washington Post saw a record number of daily installs (15,000) ahead of the invasion on February 19, as tensions between the countries were rising. 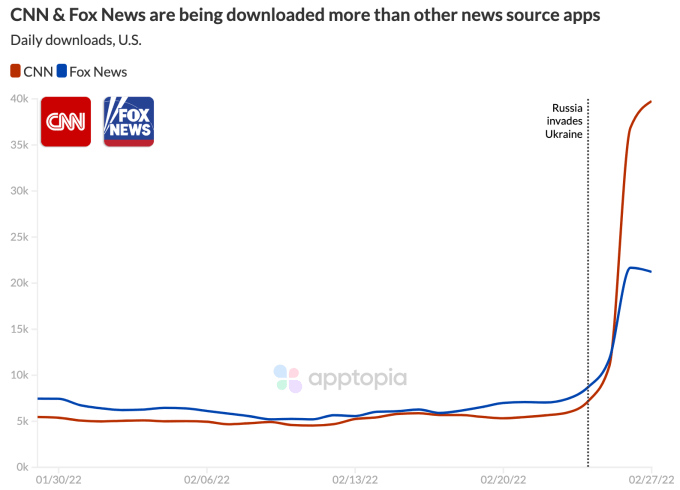 And now that Russia has locked down access to news and social media, demand for VPN apps has grown. The top five VPN apps saw a sizable jump in daily downloads after Russia began restricting access to social media apps like Facebook and Twitter in the country, Apptopia found, as users downloaded tens of thousands more VPN apps per day than is usual. Russians should note, however, that VPNs aren’t necessarily good for security. As they just route internet traffic through someone other than your ISP, your security really depends on how much you trust your VPN provider. 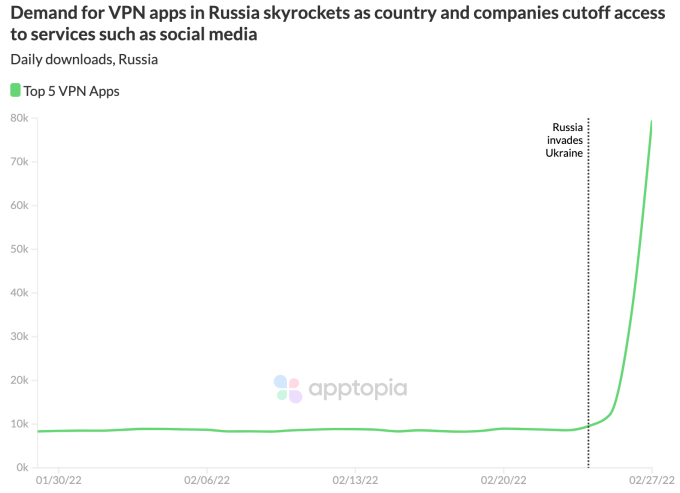