According to estimates from Insider Intelligence (previously eMarketer), Amazon Music will surpass Pandora this year to become the music streamer with the second most number of users in the U.S. Notably, this study includes users on both paid and ad-supported plans for these services — so, while Apple Music has an estimated 38.2 million subscribers, compared to Amazon Music’s 52.6 million or Pandora’s 49.1 million, none of Apple’s subscribers are on a free, ad-supported plan (though they could, of course, be on a free trial).

Amazon Music is estimated to grow 5.3% year over year, the forecast claims, while Pandora has continued to lose users since 2017 — the SiriusXM-owned streamer’s user base is expected to decline by 6.7% in 2022. A representative from Pandora declined to comment on the new report, but said that Pandora is the leading ad-supported audio streaming service in the U.S. According to its most recent report, Pandora currently has 52.3 million users, down from 58.9 million the prior year.

And when it comes to paid subscribers, Pandora lags far behind its competitors, per Insider Intelligence estimates from last year. 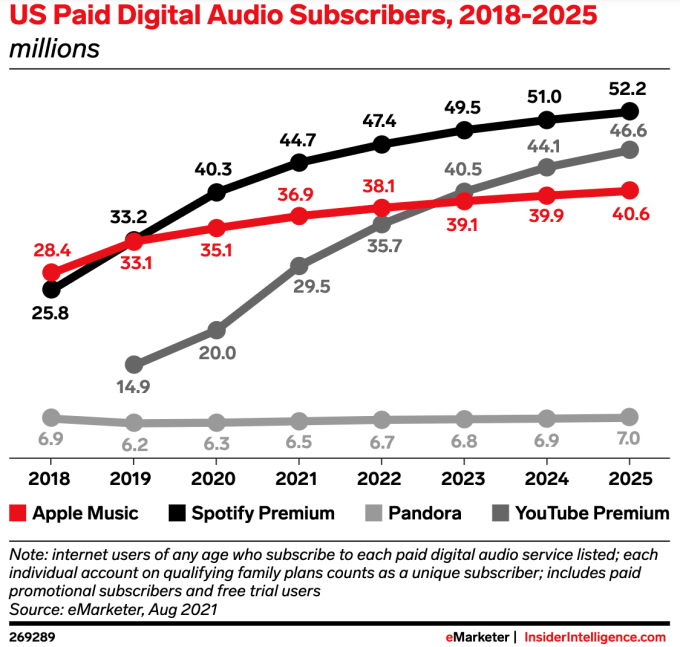 Spotify remains the number one U.S. music streamer by a wide margin, with 180 million premium subscribers globally, and 406 million monthly active users across both paid and free plans. According to Spotify’s own reports, there are about 93.38 million active users in North America, including 28.8 million paid subscribers. Since Spotify’s numbers don’t narrow down subscriber numbers by country, it’s hard to directly compare the size of Pandora’s audience with Spotify’s audience, but Pandora’s market share has continued to decline. Pandora still made a gross profit of $743 million last year, up 30% from 2020.

As Amazon Music continues to grow, the product itself has seen some notable improvements. Amazon Music and Apple Music both unveiled lossless audio streaming last year for all subscribers, a feature that Spotify doesn’t have yet, and whose delay it can’t explain. Amazon has also tried to step up its podcast offerings, adding synchronized transcriptions to select podcasts. But Spotify’s podcast listenership continues to grow quickly, despite the platform’s controversial content decisions. With podcast industry acquisitions left and right, it’s clear that Spotify doesn’t want to loosen its grip on the streaming industry.