Shares of Coinbase, the American crypto trading giant, initially soared when it reported its Q4 2021 earnings today, but investors quickly sold off the spike bringing the stock price down as much as 9%, hovering just above an all-time low.

The company bested investor expectations in the trailing period. However, citing a “decline in crypto asset volatility and crypto asset prices,” Coinbase said that it expects retail monthly transacting users (MTUs, in its parlance) and total trading volume to decline sequentially in the first quarter.

Investors had expected Coinbase to report $1.94 billion in revenues, and earnings per share of $1.85. However, we’ll note that estimates for Coinbase’s revenue and profit were rather wide heading into its call, with revenue estimates ranging from $1.19 billion to $2.44 billion, per data provided by Yahoo Finance.

Moving past the numerical nuts and bolts of corporate finance, what can we glean from the Coinbase quarter as it relates to the crypto world? Lots. The following chart is rich in information: 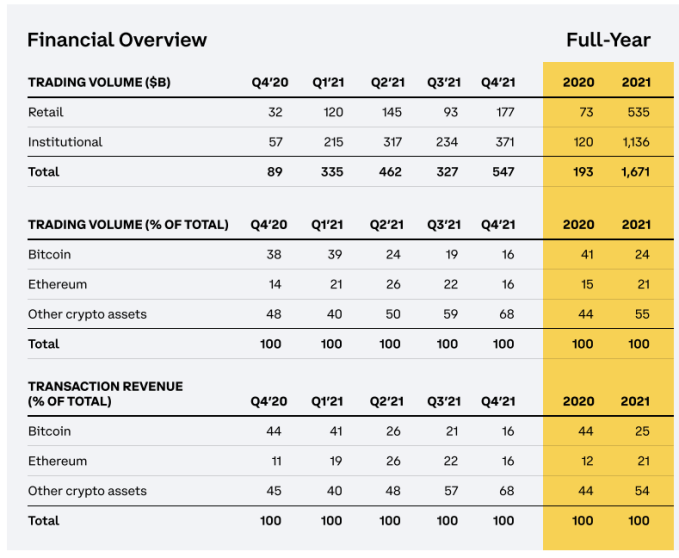 Up top we can see that retail trading activity in volume terms remains a fraction of its institutional volume; bear in mind, however, that retail investors generate not only the vast bulk of Coinbase’s trading revenues, but also the preponderance of its total top line. Despite lower volume, retail trades were worth $2.185 billion in revenue in Q4 2021, while institutional trades only generated $90.8 million in revenue.

Moving along, Bitcoin’s era of dominance in terms of trading volume and trading revenue generation at Coinbase is clearly over. It merely tied the Ethereum blockchain for trading volume and trading revenue. And, finally from the above, the rise of other crypto assets in terms of both trading volumes and incomes is something to chew on; while the crypto world at times appears to revolve around just two blockchains and their related projects, the Coinbase revenue story is a very different picture.

Why is the stock down?

Coinbase crushed estimates, posted huge profits and grew massively from its year-ago quarter. So why is the stock down? The answer is simple: The market cares more about what you are going to do than what you’ve done. Guidance, in other words, can trump strong trailing results.

Before Coinbase dropped its Q4 report, the market had expected it to generate $1.69 billion in Q1 2022 revenues and earnings per share of $1.55. Did the company’s forecasts indicate that it might not hit those marks?

Here’s what Coinbase told investors it is seeing in Q1 2022 thus far:

Looking even further ahead, Coinbase says that it expects annual average retail MTUs to land between five million and fifteen million, a massive range. And the company expects “Average Transaction Revenue Per User” to decline to “pre-2021 levels.” Investors don’t love a non-growth story, and Coinbase did not promise one.

We’ll have more from the company’s earnings call, so stay tuned.