Vendr, a startup that aims to help its customers buy software products faster and at a lower cost, announced this morning it has acquired Blissfully, a startup that builds SaaS management tooling.

Vendr raised a $60 million round led by Tiger last year, making it one of the high-growth software companies that the crossover investor bet on during the 2021 boom. The startup’s CEO, Ryan Neu, told TechCrunch that Vendr tripled in size last year and has surpassed the $20 million annual recurring revenue (ARR) threshold.

Its acquisition of Blissfully, which TechCrunch has learned was worth around $100 million, should bolster its 2022 growth, with Neu saying that the transaction will help his company continue similarly rapid expansion.

Ariel Diaz and Aaron White founded Blissfully around five years ago, Diaz said, with the goal of helping companies manage their software-as-a-service spending. The company’s tooling assists its customers in tracking internal SaaS usage, benchmarking their software spending compared to other companies and handling vendors.

It’s not hard to see how Blissfully will fit into what Vendr has built, namely what it considers to be the fastest SaaS-buying service out there. As a combined entity, the newly enlarged Vendr will be able to manage customer software from the point of purchase, through use and into the renewal phase. 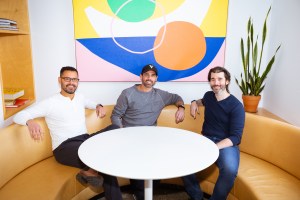 Despite a recent deceleration in value creation among software stocks, the pandemic underscored how critical software is to the functioning of the global economy. This means that companies have myriad software services in their organization, which can represent both an operational challenge and a financial liability. So, why not get some help? That appears to be the core Vendr pitch in the wake of its acquisition.

Neu told TechCrunch that Diaz and White will be considered co-founders of the combined organization and that his company is snapping up Blissfully’s team as part of the transaction.

With a growing customer base — now around the 500 mark, the company said — Vendr is collecting information concerning how companies use software. And because it will only accrete more with Blissfully under its roof, Vendr should be able to draw up a reasonably complete picture of SaaS usage for companies of varying size and industry. This means it can get into the recommendation game.

And not merely recommendations, really, but forward projections. Riffing with Neu and Diaz, it seems that their company will be able to tell customers that at their current scale, most companies of their ilk use software services one, two and three, and that as their employee count doubles, services four, five and six are common adds. This means that Vendr could not only help customers buy and manage SaaS, but also select new products.

Naturally, my conflict-of-interest antenna went up at this point, so I asked the newly conjoined co-founders how they would handle potential bias in such situations. Why bias? Because the business of recommending products to other businesses is, well, big business. It’s the whole shebang for G2, Gartner and other companies. Which means that companies will pay for a bonus recommendation — an advertising product, really. The Vendr execs said that because they have worked to engender buy-side trust, they are loath to upset their current market posture.

Let’s close with a few questions for the future: First, as a combined pair, how far can Vendr and Blissfully scale this year? Second, if they can reach the $50 million ARR milestone by the end of the year, is the company a 2023 early IPO candidate, or more of a 2024 hopeful? And, third, does the slowdown in the value of tech companies that sell software imply a softening in growth? If so, Vendr could see some of the pressures that propelled its operations to new scale diminish. Let’s see!