Employee enablement may not immediately strike you as the most exciting of topics, but giving your new employees tools for onboarding, training and setting up tools for performance reviews and other HR-related functions isn’t something that any business can overlook. Employees expect a modern user experience and for many, these kinds of tools are their first introduction to a company’s culture and processes.

Zavvy, a Munich, Germany-based startup, today launched its take on modern employee enablement and announced a $4 million funding round led by La Famiglia VC. Other investors in this round include Emerge Education, Picus Capital and a number of angel investors, including Eventbrite co-founder Renaud Visage, Personio co-founder and CEO Hanno Renner and Forto co-founder and CEO Michael Wax. 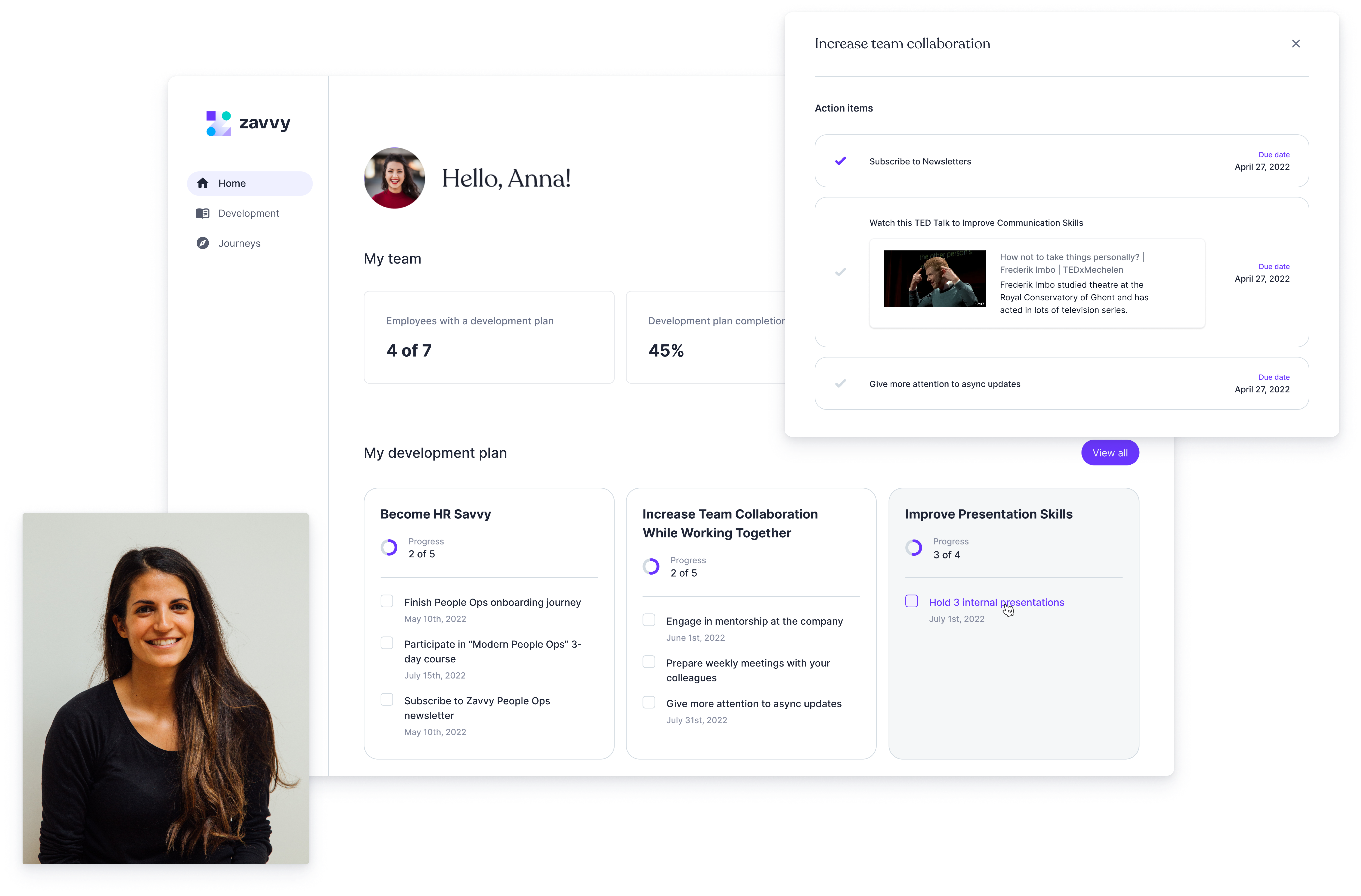 The company’s co-founders Joshua Cornelius and Mehmet Yilmaz, who first met as students in Munich, previously also co-founded Freeletics, one of the most successful health and fitness apps in Germany, which they sold to FitLab in 2018. Going from a consumer fitness startup to employee enablement isn’t the most obvious route, but Cornelius argues that there is a lot of overlap.

“We really enjoy helping people to unfold their talents — to make the best of what they have been given,” he said. First, it was in the context of physical development and then, after selling the company, we wondered, what is it that we want to spend our time on? What had such an impact on our lives that we want to spend all of our time on that?” First, the two started exploring the education space but ultimately settled on professional development. “People have to switch jobs all the time — and even if they don’t, they have to develop all the time, but there is no structured way to do that,” said Cornelius and added that in Europe, because of the protections that workers get, it’s very hard to fire somebody just because they don’t have the right skills.

Currently, Zavvy focuses on a few core areas: onboarding, training, employee development and connection programs to encourage more casual conversations between colleagues. Businesses can pick and choose which of these different areas they want to enable for their users (and the pricing scales accordingly).

The company currently targets mid-sized companies and has already signed up quite a few customers. These include the likes of Freeletics (no surprise there), as well as fellow Munich-based startups like real estate finance platform Alasco and campervan rental service roadsurfer.

“The first days in a company are overwhelming for any new employee. It’s important to give new team members a warm and supportive onboarding experience,” said Barbara Imm, head of HR at roadsurfer. “At the same time, we’re growing rapidly and need a reliable and scalable onboarding solution for both remote and in-office across 50 locations in 12 countries. Zavvy gives us exactly that. Our manual work is drastically reduced and new team members highly rate their onboarding experience. We’re looking forward to rolling out company-wide development plans with Zavvy later this year. In combination with onboarding it will allow us to offer our team continuous growth from day one.” 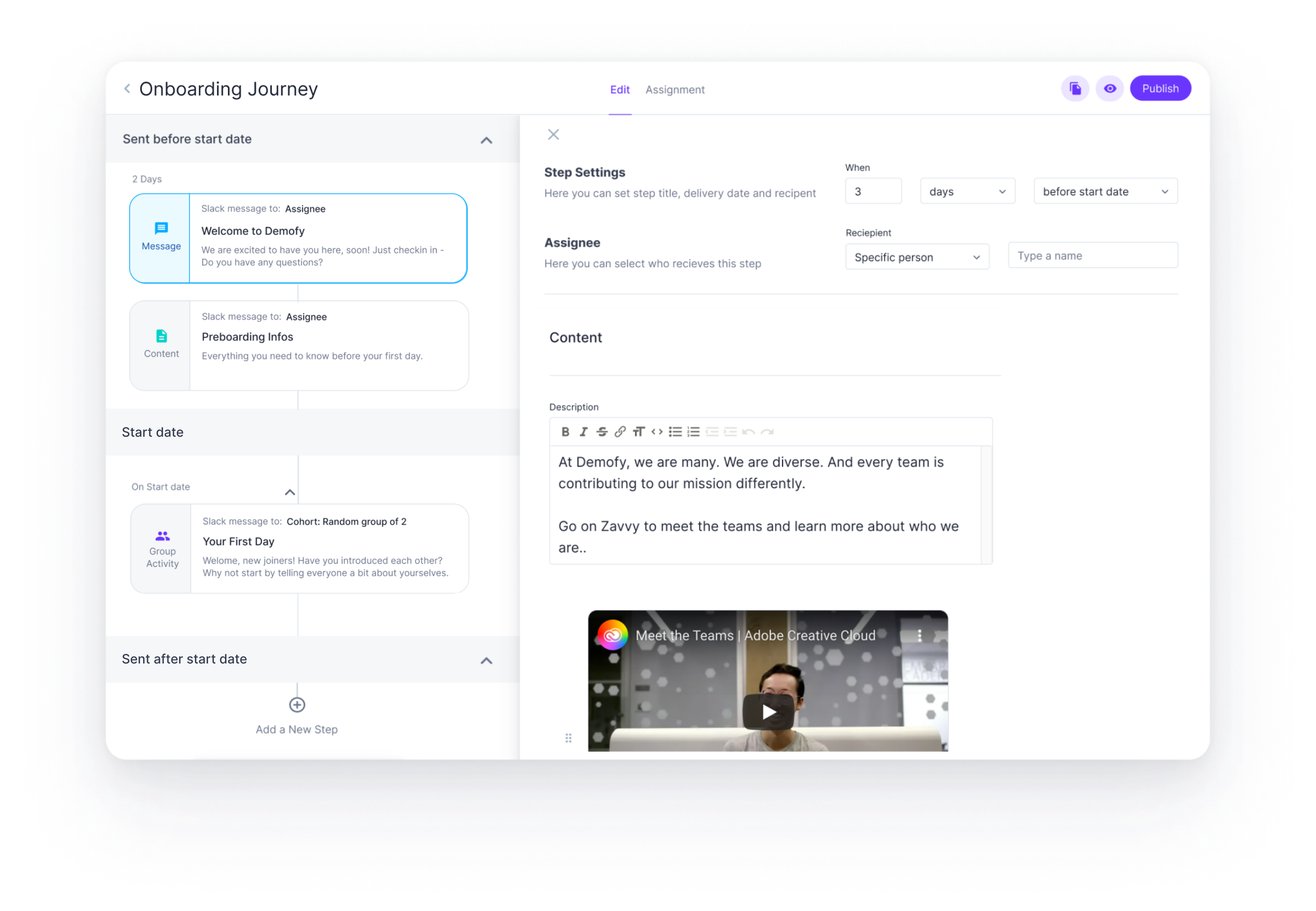 At the core of the Zavvy experience is a no-code workflow builder that allows companies to quickly build their own training materials and other forms of content to the service. To speed this up, the service also offers templates for virtually all of the standard use cases (and for companies that are still using spreadsheets, Zavvy also offers a set of free playbooks).

The service also integrates with many existing HR systems, as well as Slack and Microsoft Teams. As Cornelius noted, some of the new funding will go to building out these integrations, especially as Zavvy aims to go upmarket and bring on larger customers.

For 2022, the team plans to build more listening and training solutions into its platform.

“As companies increasingly become a commodity in the eyes of strong talent, we believe they need to rethink their entire employee experience to stay competitive,” said Judith Dada, general partner at La Famiglia VC. “Zavvy helps businesses understand and manage the growth path of their employees — starting from onboarding all the way to development cycles.”