Voila, a startup building infrastructure for social commerce, is bringing concepts from China’s e-commerce market to the U.S. The company offers an alternative to the “link in bio” solutions used today by creators, like Linktree and Beacons, which direct followers to creators’ social profiles, personal websites and other recommendations. Instead of a link list or landing page, Voila creates AI-powered customizable, shoppable storefronts by automatically detecting items in the creators’ online content, then generating shoppable links.

With now over 10,000 creators signed up for the service, Voila is today announcing the close of its $6 million Series A led by Sinovation Ventures and joined by Fosun Rz Capital. To date, Voila has raised $7.5 million, including from investors SOSV and Artesian.

Voila founder Ke Shang first moved from China to the U.S. to attend college. He later joined a machine learning team at Google, thanks to his mathematics background. But Shang was always interested in how U.S. e-commerce could be improved with technology.

For instance, Shang shares how he was once inspired by a joke on the TV show “The Big Bang Theory” to build a tech-enabled shopping tool. On the show, the character Penny asked the oddball genius, Sheldon, to create something that would allow her to take a photo of a shoe she liked in order to instantly find out where to buy it.

“Sheldon thought it was stupid,” says Shang. “But I thought this is a great idea — I could just scan through any content and find out all the shopping options right away. And if you could tell me the best deal it would be even better.”

He ended up experimenting with the idea by building out a big database of shoes by crawling online shoestores like Zappos, DSW and others, then used deep learning to train a model that would allow users to find similar pairs of shoes to those in their photo. The project wasn’t really commercially viable, but led Shang toward the creation of Voila.

Today, the founder explains, online creators act as the connector between the product and the consumers. But often, their followers who want to buy the item in question have to leave the social media app and go to Google to search for the product. And if the product has gone viral, you may find it’s already out of stock by the time you come across the photo or video that prompted you to buy in the first place. 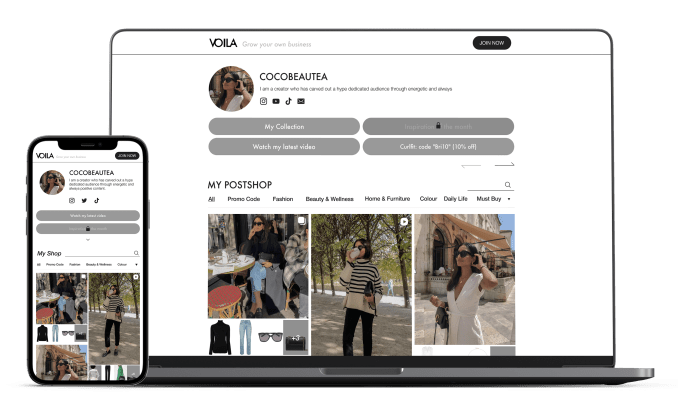 Voila offers an improved solution. While it will allow creators to enter the exact URLs for the products featured on their social media accounts, its secret sauce is how it can build out an extended list of recommendations automatically. To work, creators connect their Instagram or TikTok accounts to Voila, which then scans through their content to detect items and generate affiliate links. As part of this process, it uses machine learning to try to also analyze the scene in order to suggest other relevant items that can be added.

That is, in addition to the specific product the influencer suggested, Voila can generate a list of similar products at different price points and generate affiliate links to those items as well. 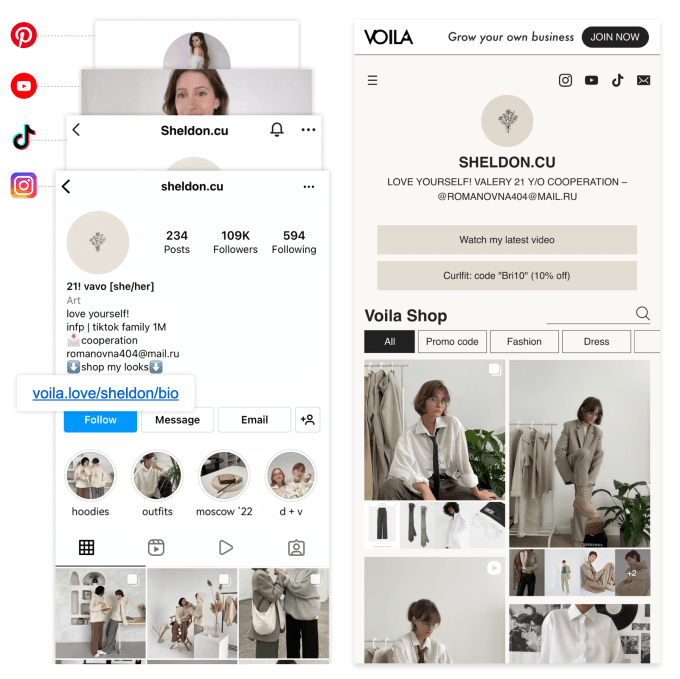 “We like certain influencers’ or celebrities’ lifestyles, but we can’t afford those styles,” Shang explains. “That shouldn’t stop our pursuit,” he notes. “You have options. It’s just a way to make sure that everyone finds the right thing and increases the creators’ content-inspired sales.”

Plus, if an item is sold out at one retailer, Voila can find it at another.

It can also suggest items to accompany the purchase that aren’t in the photo or video. For example, if the influencer was wearing a nice pair of sunglasses on a hot, sunny day, Voila might suggest a hydrating face mask alongside the sunglasses. 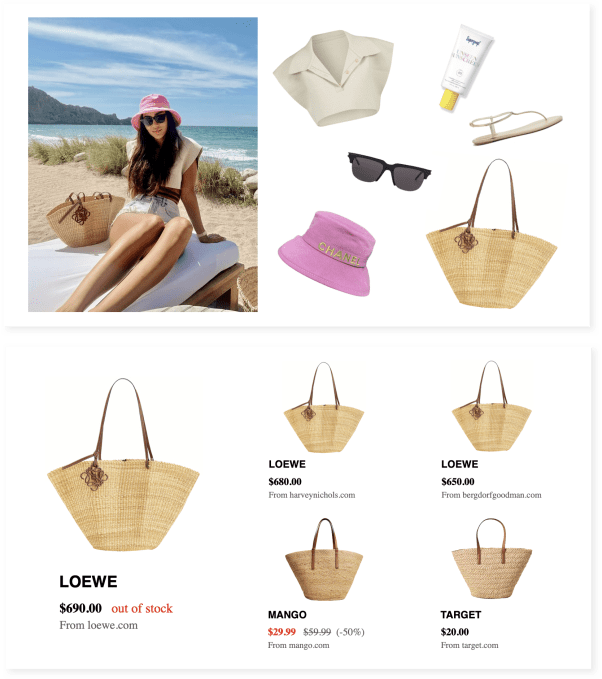 To train its model, Voila crawled around 50 million fashion and style photos and learned north of 300 different attributes that relate to apparel items.

The products are showcased on online storefronts that creators can customize with their own text, colors and links. On the back end, it offers creators analytics detailing their shop’s engagement, audience demographics and more. 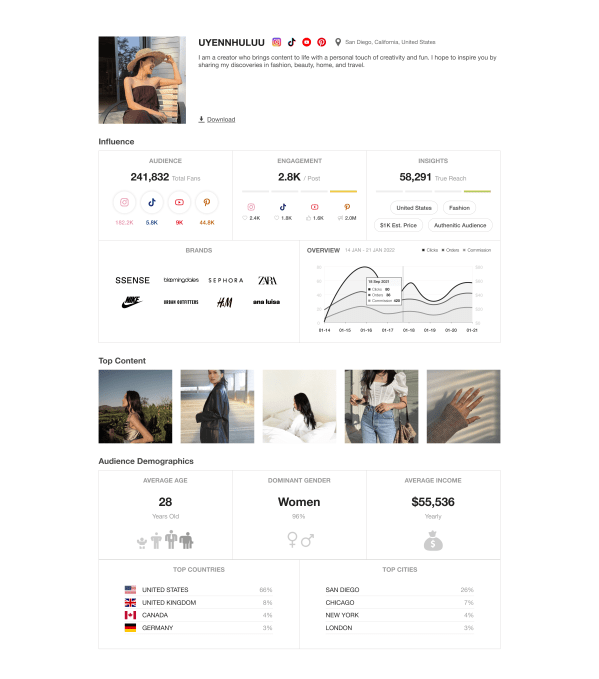 Since launching in late 2019, Voila has signed up over 10,000 creators to its service. More than 70% are based in North America, with around 20% in Europe and the rest hailing from parts of Asia. Unlike some “link in bio” solutions, Voila’s service is free to the creators — there’s no freemium tier with a push to upgrade to a premium subscription.

Instead, Voila works with affiliate marketing programs Rakuten and CJ to create the creators’ links that can be matched to a database of roughly 3 million products. Its revenue comes from taking a percentage of sales its platform generates. Voila won’t disclose how much it’s making, citing the early-stage nature of its business and the competitive landscape. 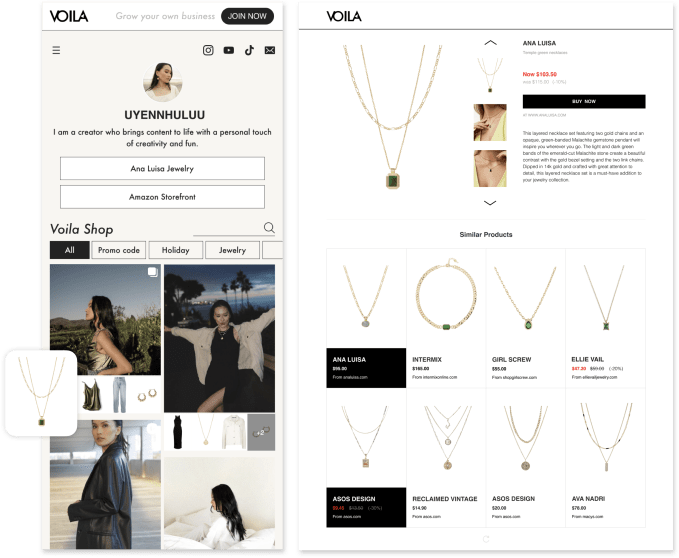 Shang ended up fundraising for Voila after getting stuck in China after flying home to visit family just before COVID hit.

“I was stuck there for two years,” he says. “But while I was in China, I didn’t waste any time. I got the team built. I was also able to raise two rounds — one pre-Series A round from a small investor and a Series A round from the current investors.”

Today, Voila has a 40-person team, which includes former Alibaba, ByteDance and Rent the Runway employees across both the U.S. and China. The company is now in search of a CMO.

Shang, who’s currently on the East Coast, is preparing to move out to California to be in a better time zone for communicating with staff in China.

“I haven’t been able to sleep before 3 AM every day. I can’t do that anymore,” he notes.

With the additional funds, Voila plans to grow its user base and spend more of its resources on its database.

“That’s really the most difficult task, and I think that’s the key to our success,” Shang says.