Neighborhood social network Nextdoor is revamping its product. The changes, which aim to simplify the app and promote better relationships between neighbors, follow last year’s hire of Nextdoor’s new Head of Product Kiran Prasad, who joined the company after serving at LinkedIn. Combined, the updates are laying the groundwork for a new strategic direction for Nextdoor, which the company calls the “active valued community strategy.”

This refers to the combination of the neighborhood community and the value that comes from local networks. Meanwhile, the “active” refers to Nextdoor’s motivation to connect people both digitally and in the real world.

The original idea with Nextdoor was to create a hyperlocal social network where people living in the same area could share neighborhood information, get recommendations, learn about local businesses and more. But Nextdoor often became known instead as a place where people go to air their grievances, report crime, get into heavy political discussions or engage in other less-than-neighborly behavior. In previous years, the social network even developed a reputation for racial profiling, which led to the company releasing specific features to address this. Its CEO later stepped down.

Over subsequent years, Nextdoor tried to fight against its more negative image, including with the launch of new tools that encouraged neighbors to lend each other a hand or donate their unwanted stuff to one other. When the company debuted on the public markets after a SPAC merger in 2021, it did so under the ticker “KIND,” in the hopes of cementing the idea into investors’ minds that it was the “nicer” social network.

But now, Nextdoor is rolling out features that better align its product with its larger vision. The goal here, explains Prasad, is to help create a “vibrant, welcoming neighborhood both online and offline.”

“We want to build products that are really for the community creators, the community connectors — the people who want to actually improve the local community in some way,” he explains. “And we don’t mean this purely in the digital sense.” 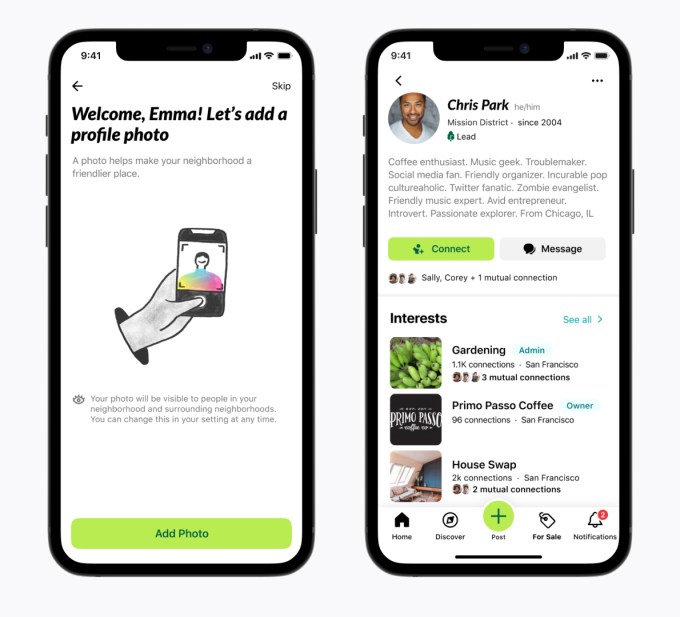 Among the key changes is the launch of new user profiles that allow people to introduce themselves to others with a photo, short bio and their preferred pronouns. This, the company hopes, will allow people to connect their online friendships to the real world — including those neighbors they may only know casually, who they wave at on walks or who they bump into at the local dog park, for example.

When new members join a Nextdoor neighborhood, others in the neighborhood will be able to celebrate their arrival with reactions and virtual gifts, like cookies or flowers — similar to how neighbors would often greet new arrivals in the past with in-person care baskets.

Neighborhood members will also be able to connect and @mention one another in posts and comments, similar to other social networks, like Twitter or Facebook. And when two members connect, they’ll then be able to see each other’s posts, comments and reactions highlighted in their main feed. 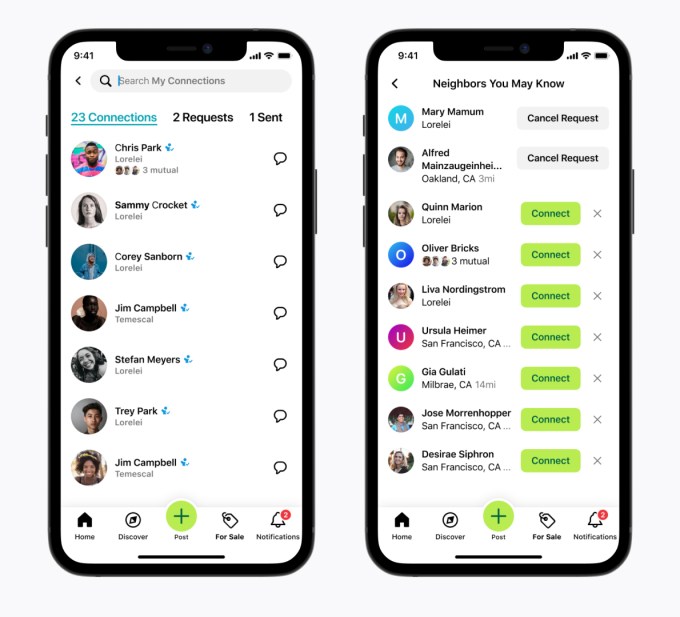 Another “Neighbors You May Know” feature will also recommend people you may want to connect with, based on proximity, connections you have in common, on-platform interactions or personal contacts. This feature, in particular, relies on Nextdoor’s unique ability to understand where users are in the real world, as joining a neighborhood on the app first requires address verification.

The “Connect” feature, which is Nextdoor’s version of “friending” someone, will help to form the basis for the new type of social network Nextdoor is creating. These may be people you don’t necessarily want to “friend” on Facebook, because they’re not close friends or family, or on LinkedIn, because they’re not colleagues or business relationships. But they are people you want to keep up with in some way — maybe because they’re the parents of your child’s friends, members of a local club, community organizers or someone with a prominent position, like PTA president or HOA board member.

Beyond putting a more human face on Nextdoor members, the profiles may have some impact on user behavior.

“The fact that your photos are more central — the fact that people are going to be able to search for you and be able to mention you with @mentions — it makes the person be more aware of their identity on the platform,” Prasad notes. “I think that definitely will lead to people being more aware of how they’re presenting themselves to their local neighborhood.”

The app’s layout, navigation and main feed are being redesigned, as well, with these new features in mind. The feed will now focus on conversations and those “Connections” that matter most to you. That means, you’ll see the updates from the people you know and follow better highlighted in the new feed, which will get smarter over time.

Initially, it will look at things like who you’ve interacted with in the past, who you liked or reacted to, who you communicated with, businesses you’ve recommended, groups you’re a part of, and more.

“There’s probably on the order of 50 to 60 signals, and all of them add up to a [machine learning] model that tries to be more relevant,” Prasad notes. Over time, the feed may grow to take into account more signals, like the tone of a post, in order to downrank unhelpful content. But it’s not there yet.

Nextdoor will also remove duplicate and outdated links, will offer better search capabilities and will roll out a more prominent post composer button that highlights, using colorful icons, tools for selling or giving away unwanted items, posting a video or tagging a location. Privacy settings are easier to access, too, with these changes.

Not all users will see the new features today, however.

Some of the features have been tested in select markets before today’s formal launch, but all will gradually roll out to Nextdoor’s global users in the weeks and months ahead. The company notes that early tests found the addition of profile photos delivered 180% more profile views and 46% more Connection requests. And overall, the new features led to people posting more on the platform. However, the larger goal is not necessarily addicting users to the Nextdoor app for long periods of time.

“One of the biggest things we’re trying to do is to make sure people get out there in the real world and actually interact with each other,” Prasad insists.

The changes come to Nextdoor at a time when Facebook, already a popular home for private neighborhood groups, stepped up its competition with Nextdoor. Last year, Facebook launched “Neighborhoods,” a shameless Nextdoor clone that looked to formalize neighborhood groups by way of a dedicated product that also involves geolocation.

What does the new era of location intelligence hold for businesses?

Nextdoor says it hasn’t seen any real impacts from that launch, though. It’s been working to build its neighborhood network for 12 years, and that’s paid off in the form of 66 million total users, 33 million of which are active on a weekly basis, at an average of 4x per week on the app. It also has 54 million business recommendations on the platform, and more than 285,000 neighborhoods worldwide, including one out of three U.S. households. In addition to the U.S., other markets on Nextdoor include the U.K., Germany, France, the Netherlands, Italy, Spain, Sweden, Denmark, Australia and Canada.

The features rolling out today are part of a larger strategy at Nextdoor that will expand over time, Prasad says.

“In a quarter or two, you’ll see another set of products come out. And hopefully, you’ll see this theme emerge that’s around helping people form community,” he hints. “You’ll see more tools for active community leaders who want to actually improve the local neighborhood community.”