Homebound started out to help people rebuild after their houses were destroyed by California wildfires in 2018.

But over time, the company realized that its digital general contracting and “personalized” homebuilding services could be applied to non-disaster use cases as well — especially in regions where there is a major shortage of inventory.

And today, the Santa Rosa, California-based startup is announcing it has raised $75 million in a Series C funding round led by Khosla Ventures toward its efforts to help address those inventory shortages with its technology. In addition to the equity, Homebound also secured “hundreds of millions” in debt from Goldman Sachs. The raise brings the company’s total equity haul to $148 million since its inception.

Homebound’s self-described mission is to serve as a “next gen” homebuilder to make it possible “for anyone, anywhere to build a home.”

Until last April, the startup had been exclusively focused on helping homeowners navigate the challenges and complexities of rebuilding after wildfires in California. But in 2021, Homebound expanded to Austin, Texas, its first non-disaster market, with the goal of taking learnings from those rebuilds and applying the same “streamlined, tech-enabled building process” to make custom homebuilding an option for local homeowners.

The move went even better than expected, according to CEO Nikki Pechet, who co-founded Homebound with Atomic managing partner Jack Abraham.

“We realized what we were facing in Austin and other markets across the country was a different kind of disaster, which is a historic housing shortage being compounded by record migration to a bunch of cities around the country that had some of the worst shortages in the country already going into this migration,” Pechet told TechCrunch. “While we had a plan and knew roughly what we were going to do, we could never have imagined the insane acceleration of Austin or what we’d be able to accomplish in what has definitively been the biggest 10 months in the history of the company.” 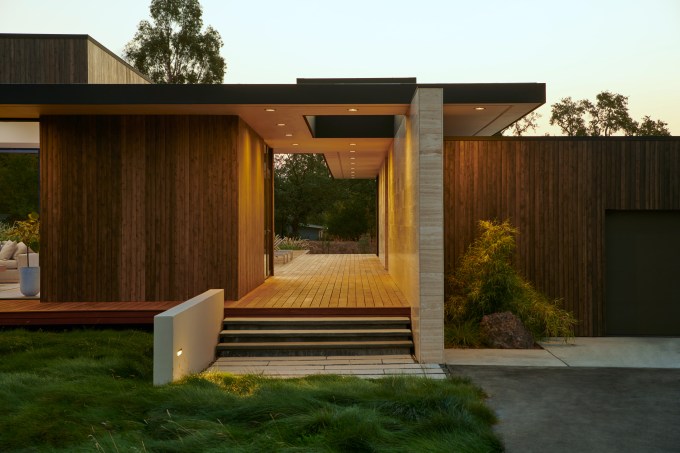 When Homebound launched in Austin, it knew that it was going to need to be able to acquire properties that it could turn into for-sale homes. It also realized that at the pace it was scaling, it needed to double down on its tech investments. So it went out last year to raise a $50 million Series C. It ended up with $75 million, plus hundreds of millions of dollars of debt to power its purchase property program. Using machine learning and data, Homebound looks to purchase land in mostly off-market transactions.

The company starts by helping a potential homeowner identify land they want to build on, or helping them find a lot among the inventory Homebound has already built up. From there, it can help with everything from architectural plans to design to actual construction via its platform. Homebound offers a set of plans for people to choose from, with varying levels of customization.

Building costs for a typical single-family home in the Austin area start at around $500,000 depending on the size, complexity of house, lot size and location. That does not include land cost. Some people are also opting to build second units on existing properties. As the housing market in Austin has essentially exploded, so too has the demand for new homes.

“In most cases, people can build a new home for less than they can pay for an existing home just because of the dynamics,” Pechet has said. (Note: The starting figure was originally closer to $300,000 but the city has seen a 46% jump in median home prices since Homebound entered the market).

The construction industry has long been plagued by inefficiencies and productivity challenges. And while the sector has never before seen such influxes of capital, there is still clearly room for improvement.

Homebound believes its “full-stack incorporation of tech at every stage in the homebuilding process” addresses issues that plague the industry, from inefficient labor productivity to underwhelming customer experiences.

Homebound declined to reveal any revenue growth metrics or its valuation, saying only that other existing investors — including Google Ventures, Forerunner, Thrive, Irongrey and Fifth Wall, plus Deer Park Road, former Amazon executive Jeff Wilke and real estate developer Stephen Ross — also “substantially” participated in the Series C financing. Pechet said the company’s existing backers were eager to invest again because Homebound has “done all the things we said we were going to do.”

The startup says it will use its new capital to scale rapidly across new markets in the U.S. — starting with Dallas, Houston and Denver — and continue to invest “heavily” in building a proprietary technology platform to “combat the drastic supply/demand imbalance” that exists in cities.

It says: “The result is more efficient projects that are 80% faster through pre-construction, 10% faster during construction, and 8x more efficient during the architecture and design phase with an average cost savings of up to 30% when compared with other local custom builders.”

Homebound currently has just over 200 employees and also plans to use its new capital to conduct “massive hiring across the board.”

“This is a tough category to build a business in,” Pechet said. “People want to work on companies that matter. But with a 5.5 million housing shortage, this is needed. And we expect this to be a multibillion-dollar company one day.”

David Weiden, founding partner and managing director at Khosla Ventures, told TechCrunch that it has invested in Homebound for two reasons: the team and the market.

“Nikki and Jack are terrific founders we are pleased to back,” he wrote via email. “Construction is massive in terms of financial, societal, and environmental impact with significant opportunity for innovation to disrupt and improve it in a myriad of ways.”

“And while there are many participants in the construction ecosystem, Homebound has a relatively unique approach in terms of breadth and leveraging technology,” Weiden added. “The value of their approach has been proven out and demonstrated by the scale they have achieved to date in a fast and capital-efficient way.”