Large merchants, particularly those that operate in more than one geography, have to support an array of payments methods. Each payment integration requires in-house technical work and the remodeling of one’s platform to fit their plugins.

It’s an extensive process that has seen some Big Tech companies build dedicated teams to manage different connections, data and cycles with the payments gateways in the markets where they are present.

In the U.S., U.K. and Europe, payment orchestration platforms such as Spreedly, Zooz and Primer handle a lot of the heavy lifting on behalf of merchants via a unified payments API. But there remains an untapped opportunity in Africa and the Middle East, where significantly few companies bring transparency to merchants’ payment stacks.

Egypt and U.S.-based MoneyHash is one such company, emerging from beta with $3 million in pre-seed funding. The company describes itself as the Middle East and Africa’s “first super-API for payment orchestration and revenue operations.”

When merchants or companies get their platforms off the ground, they primarily work with one or two payment processing providers. Over time, these merchants onboard more payment providers to meet their growing needs as they get bigger and expand across multiple regions.

But integrating different payment stacks is no mean feat. Aside from the operational inefficiencies and technicalities involved, an in-house tech team can take three to 10 weeks to complete integrations. In Africa and the Middle East, these problems are magnified due to differences in payment methods, currencies and isolations between countries.

Nader Abdelrazik, Mustafa Eid and Anisha Sekar — with a combined experience of over 30 years working for companies such as Microsoft, UpWork, NerdWallet and Sigfig — founded MoneyHash in late 2020.

MoneyHash sits on top of payment providers and offers its infrastructure as an extension of companies’ product backend. This extension becomes their connection to the entire payment ecosystem in the markets they operate.

“The idea of the super-API is that you consolidate the different payment accounts and build all of these features on top of it. MoneyHash becomes this one-stop-shop product, or payments stack that you put in your product and manage all of these different integrations and checkout experience in each of the African and Middle Eastern countries and have all your information on one dashboard,” CEO Abdelrazik said on a call with TechCrunch.

In early 2021, MoneyHash started in Egypt, allowing 17 companies to use its sandbox environment to connect with its API and access payments gateways such as Fawry, Paymob and PayTabs.

MoneyHash will plug into different payments gateways and processors active in the Middle East and North Africa post-beta. Some include Checkout, Stripe, Ayden, Amazon Pay, Tap and ValU. 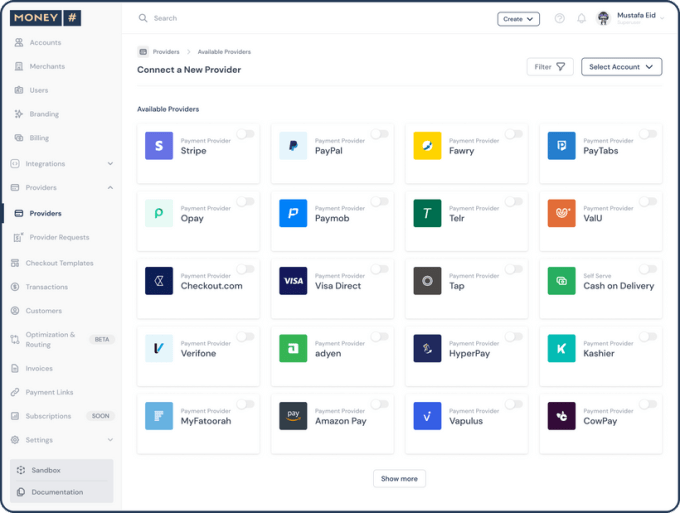 Integration with payment providers in sub-Saharan Africa (mainly serving Nigeria, Kenya and South Africa) like Yoco, Paystack and Flutterwave will follow suit, said the chief executive, without giving specifics about when it would roll out the product for the region.

MoneyHash clients cut across different industries: e-commerce, travel and tourism, and remittances, among others. They can integrate payment providers with a few clicks, embed a unified checkout system, and access micro-services such as transaction routing, subscription management and invoicing on the platform.

And of the 17 companies testing its sandbox for free, five are active and paying customers. MoneyHash charges these companies between $150 and $1,000 per month, depending on the number of payment providers they connect to. The platform also takes transaction fees that start at 10 cents and go down as payments volume increases.

Abdelrazik said MoneyHash plans to become the AWS. of payments in the Middle East and Africa. “What AWS did to the cloud, where it made it easy for companies to build as many services on top of the infrastructure, we think the payment industry, especially in emerging markets, is very fragmented and needs an AWS for money, which MoneyHash is doing when you connect with it and build as much as you need without needing to change anything,” he said.

MoneyHash will use the funds to turbocharge its growth in the Middle East and Africa, it said in a statement. The company also plans to expand its team — currently 15 across the U.S., Egypt, the UAE, Nigeria and some parts of Europe — and hire mid-level and senior software engineers.

“MoneyHash is led by three remarkable founders with deep knowledge of payments and acumen for product-led execution,” Amir Farha, founder of lead investor COTU Ventures, said in a statement. “They are attracting a great team of talent, and after their impressive beta run, their product is ready for prime time. We are excited to be part of their journey.”