Google is introducing its own take on Apple’s SharePlay feature for FaceTime with today’s launch of a new “live sharing” feature for users of its Google Duo video calling service. In Google’s case, however, the interactive, co-viewing experience is not nearly as robust or as broadly available as Apple’s. It only works with a handful of Google and Samsung apps, for starters. And, at launch, it’s a Samsung exclusive.

The changes were announced as part of Samsung’s Galaxy Unpacked event, where the smartphone maker presented its new Galaxy S22 series and Galaxy Tab S8 series devices. Related to this, Google also shared a handful of updates to its own apps, like Duo, as well as YouTube and others.

Google Duo’s live sharing feature stood out as being one of the more notable changes as it addresses a similar use case as SharePlay, even if it feels like a watered-down variation. Like SharePlay, Duo’s live sharing also ties into the pandemic-induced trend of spending more time interacting with friends, family and colleagues remotely over video calls. Today, people want to be able to do more than just talk on video chats. They also want to be able to watch content together, interact with the same apps, and share their screens. Duo addresses these needs to some extent, but without the broad ecosystem of third-party app integration that SharePlay offers. 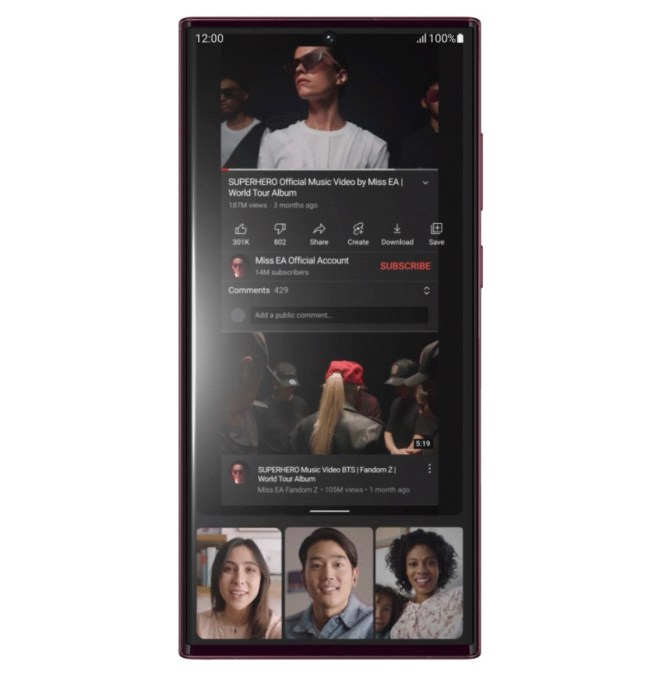 With the Duo update, users will be able to brainstorm new ideas using Google’s digital whiteboard Jamboard, share photos with Gallery, share notes with Samsung Notes, search for locations in Google Maps and watch videos together on YouTube, Google says.

By comparison, Apple’s SharePlay out of the gate worked with far more apps and services, including many top streaming services like Disney+, NBA, TikTok, Twitch, Paramount+ and Showtime, as well as Apple’s own apps like Apple TV+, Apple Music and Apple Fitness. Unfortunately, Google declined to say if it has any intentions of making Duo a more feature-rich service over time, when asked. There was no news of a developer API platform, either.

“There are no current plans we can share at the moment beyond what was initially shared,” a spokesperson told us, when pressed for more details.

But the company did note that it would not be a Samsung exclusive in the long term. The feature is launching first on the latest Samsung devices, including the Galaxy S22 and Tab S8. It will soon roll out to other Samsung devices and Pixel devices, followed by other Android devices later in 2022.

In addition to Duo’s live sharing, another update brings YouTube users the ability to view a preview of YouTube videos in Messages to better decide whether to watch the video now or later. Users can tap to play the video without leaving the chat, as well. This feature will be coming to all Android phones, with an exception of Android (Go edition) devices.

Also, the new Galaxy S22 series and Galaxy Tab S8 series devices will now no longer require users to download a separate app for Voice Access, as it will be built-in. And devices will support Google’s new personalized design language, Material You, the company said.