It’s kind of a broken record at this point, but the cloud infrastructure market continues to grow at an astonishing rate. Over the last year, it added almost $50 billion in business, growing from $129 billion in 2020 to $178 billion this year, according to Synergy Research data. Canalys reports similar numbers.

As for the quarter, Synergy reports the market reached $50 billion, up 36% over the prior year. The big three — Amazon, Microsoft and Google — continue to grow at a remarkable rate, even as the market matures, taking advantage of that growth with their market strength.

Microsoft and Google are growing faster at similar rates, around 45% for the quarter, while Amazon is growing at just under 40%. The quarterly revenue numbers worked out to around $17 billion for Amazon, $10 billion for Microsoft and $5 billion for Google, all healthy and growing businesses.

The market breakdown by percentage hasn’t changed a ton over the last year, with Amazon leading the way with 33%, followed by Microsoft with 21% and Google with 10%. It’s worth noting that Amazon’s market share has been stubbornly persistent for several years, while Google and Microsoft continue to grow steadily over time, but of course, the market continues to expand and Amazon revenue continues to grow at a decent rate.

With a $22B run rate, does it matter if Google Cloud still loses money?

In fact, Synergy reports that Microsoft, which was at just 11% share 4.5 years ago, has doubled its position in 18 quarters, an impressive rise. Synergy principal analyst John Dinsdale said that he isn’t too concerned, though, that Amazon’s position hasn’t changed in a while. He calls it a nice problem to have.

“Well, controlling a third of a huge and rapidly growing market is a very nice ‘rut’ to be in,” Dinsdale said. And while he isn’t about to predict the future, he noted it’s hard to keep growing consistently at a rapid rate.

“As a matter of principle, we never project or comment on likely future market share performance — that’s a rubicon that analysts like us should never cross. I will say that math is a powerful force, and the bigger you are, the more difficult it is to maintain aggressive growth. That is just a fact of (corporate) life.” 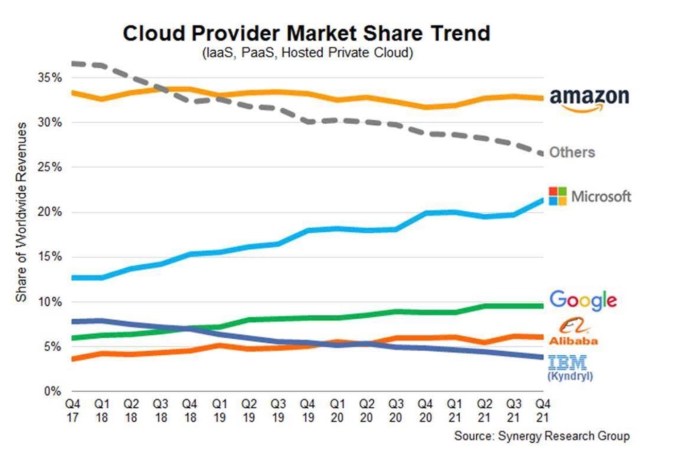 For the quarter, it broke down as Amazon with 33%, Microsoft with 22% and Google with 9%. Again, these numbers are close enough to Synergy’s to call it a draw. Both define the market similarly, so it shouldn’t come as a huge surprise.

The fact is that the market continues to grow at a rapid rate, and if analysts and prognosticators are correct, there is still a ton of room for growth in the cloud. We’re certainly seeing that quarter after quarter in recent years, as the largest players, in particular, reap the benefits of this growth with gaudy revenue numbers.

Even at the bottom of the market, there is still plenty of money to be made. While it might not meet the level of Microsoft, Amazon or Google, it can still add up to multibillion-dollar businesses. Chances are, in the coming years,we will continue to see continuing rapid growth. When we reach a point where we don’t, that’ll be the “man bites dog” news event.