Walmart is expanding into home services. The retailer today announced a new partnership with Angi (previously Angie’s List), which will make service professionals available to Walmart customers in nearly 4,000 stores across all 50 states. When Walmart customers shop in-store or online, they’ll be able to also book an Angi professional for any of 150 common home projects, including flooring, painting, fence installation as well as smaller jobs like furniture assembly or mounting a big-screen TV.

In 2018, Walmart had taken its initial further steps into the home services market when it teamed up with Handy to sell in-home installation and assembly services in over 2,000 stores, and then later online. The idea was that when customers were purchasing items, like furniture, they could also immediately purchase an installation appointment to help them get the new item set up in their home. The move had followed rival Amazon’s own entry into home services, which had included the launch of a dedicated Home Services hub on its retail website in 2015.

Shortly after Walmart announced its partnership with Handy, the company was acquired by Angi Homeservices. And last year, Handy co-founder Oisin Hanrahan became the CEO of the combined organization. It was expected that Walmart could also capitalize on this arrangement by later expanding its own deal to include Handy’s full range of home services at some point, given the potential market.

Today, Angi, not Handy, will become Walmart’s home services partner. This will allow the retailer to link its customers to Angi’s network of more than 250,000 professionals. Handy will no longer have its brand showcased on Walmart’s website as a result, Angi told TechCrunch. Instead, only Angi’s branding will be found both in-store and online. This also builds on Angi’s rebrand and launch in 2021, when the company decided that “Angie’s List” no longer accurately described its offerings as it was no longer just “a list” but rather a site where customers could research, book, schedule and pay service pros and other home contractors.

In comparison with the Handy partnership, Walmart’s new deal with Angi will see a much broader number of SKUs than the previous integration, correlating to the larger number of services offered. Handy’s partnership had primarily focused on in-home installation and assembly services on smaller-scale projects, like TV or furniture installation, which start at $49 and $79, respectively. But the Angi partnership goes further to include new and more complex services like painting, flooring and fencing. And it’s working to expand into additional, complex services as well, Angi says.

Angi declined to share the details about the financial nature of the partnership nor its impact on revenues, when asked. It wouldn’t disclose, for example, what sort of commission it may take on the Angi services booked through its site. However, Walmart will be Angi’s first, limited-time exclusive retailer to offer its services. 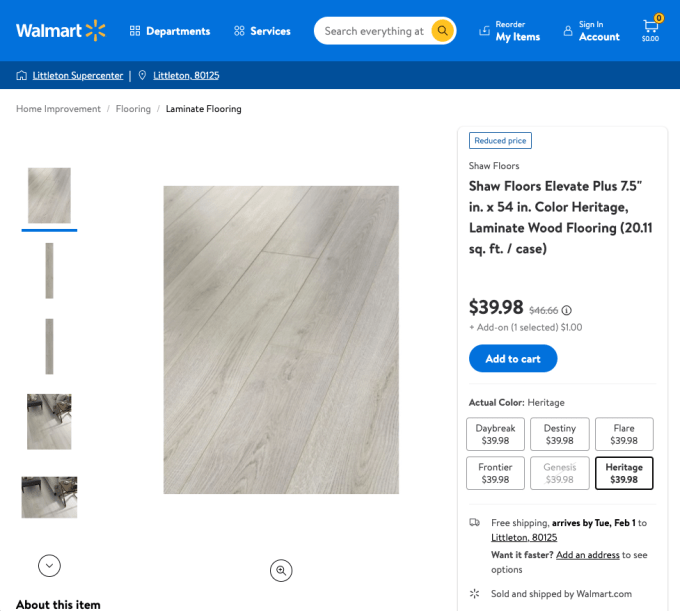 Customers will be able to book Angi’s services both online and in-store alongside any eligible item or from Angi’s dedicated landing page at Walmart.com, which goes live in mid-February. (The URL itself has yet to be finalized, we’re told.) After purchase, Angi will reach out to coordinate the booking. For larger services, a dedicated project advisor provides the customer with a custom quote, finds a pro and handles the work to make sure the project is successful.

We are pleased to launch Angi with Walmart, a leading global retailer, as our first retail integration,” said Angie CEO Oisin Hanrahan, in a statement. “Since the start of the pandemic, the home is in focus and people across the U.S. are doing more home improvement, maintenance, and repair work and they are often turning to Walmart to find the tools and materials needed to start those projects. Things like sprucing up an entertaining space by installing a new smart TV, painting a nursery for a family addition, and transforming an outdoor space and adding a patio are now projects that Walmart customers can get done seamlessly with the help of an Angi pro as part of the Walmart shopping experience.

“Angi brings experience and highly-rated pros to our customers to help them get jobs done around the home,” added Darryl Spinks, senior director of Retail Services at Walmart. “We’re thrilled to bring the convenience and ease of Angi’s services to our customers.”

1/31/22, 2:42 PM ET: A mistake in Angi’s announcement said pricing started at $45. It is $49. This was corrected. Also clarified Q&A responses were from Angi, not Walmart, regarding monetization.