A startup with the easy-to-remember name of The.com aims to modernize website building while also ensuring that web creators get credit for their work. The company, which is today emerging from stealth with $4.4 million in seed funding in tow, has created what it calls a “low-code, website building platform” that aims to ditch the template-based approach that’s become an industry standard. Instead, The.com’s site builder uses community-created components you can drop into your site and share with others. Website creators can even collaborate with one another during the site-building process and chat directly.

The company has now closed on $4.4 million in seed funding led by NFX and with participation from Sound Ventures, VSC Ventures, Village Global and Harry Stebbings.

The idea for The.com comes from co-founders and brothers, Jeff and Clarke McKinnon. The founders have a background in website development and design, having run their own web development agency in Boulder from 2012 through 2019, before founding The.com. During this time, they experienced firsthand the frustrations that come with traditional web development, Clarke said.

“We were waiting for somebody else to come up with the perfect platform that will solve all our needs. It just didn’t happen,” Clarke told TechCrunch. “So we started to build it ourselves.” 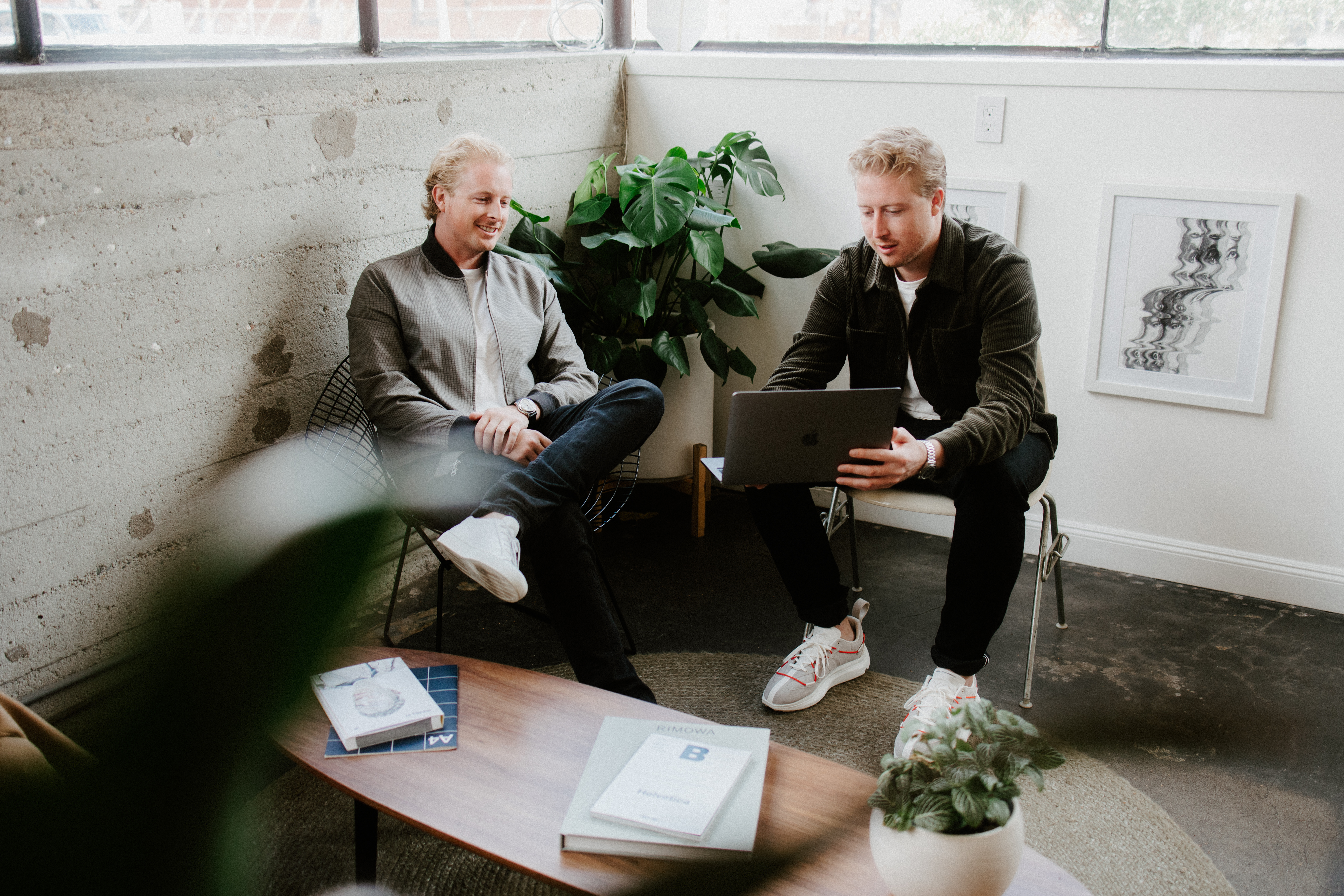 Initially, their platform was meant to be an internal tool, but it began to draw interest from their current customers who encouraged the brothers to make the product more broadly available and turn it into a business. So the brothers shut down their agency business in May 2019 to work on what has now become The.com.

Clarke explained that, with traditional web development and legacy platforms, there are speed and security issues. But there’s also a constant struggle with customers asking for deeper customizations, which then require hard-coding and continual work to keep updated. Plus, many of the current web-building platforms today are geared toward people who are already site designers. But the co-founders knew from their own experience that there’s often a big group of people who contribute to a website who aren’t designers.

“We just needed a website-building platform that put everyone on the same playing field,” Clarke said.

Starting a new website on The.com is as easy as pressing a “create site” button, which then immediately deploys the site infrastructure. Users can then invite other people to build with them as collaborators, and then click a button to start editing the site. Instead of starting from scratch or picking out a template, creators pick and choose the individual pieces and components they want to use. That means they can pick up a navigation element from one The.com creator, a footer from someone else, and other elements like hero images, headers, banners, body elements, and more from different community members. As you pick the elements, confetti bursts on-screen, giving credit to the original component’s creator. But in time, The.com will roll out a way of rewarding creators financially, as well. 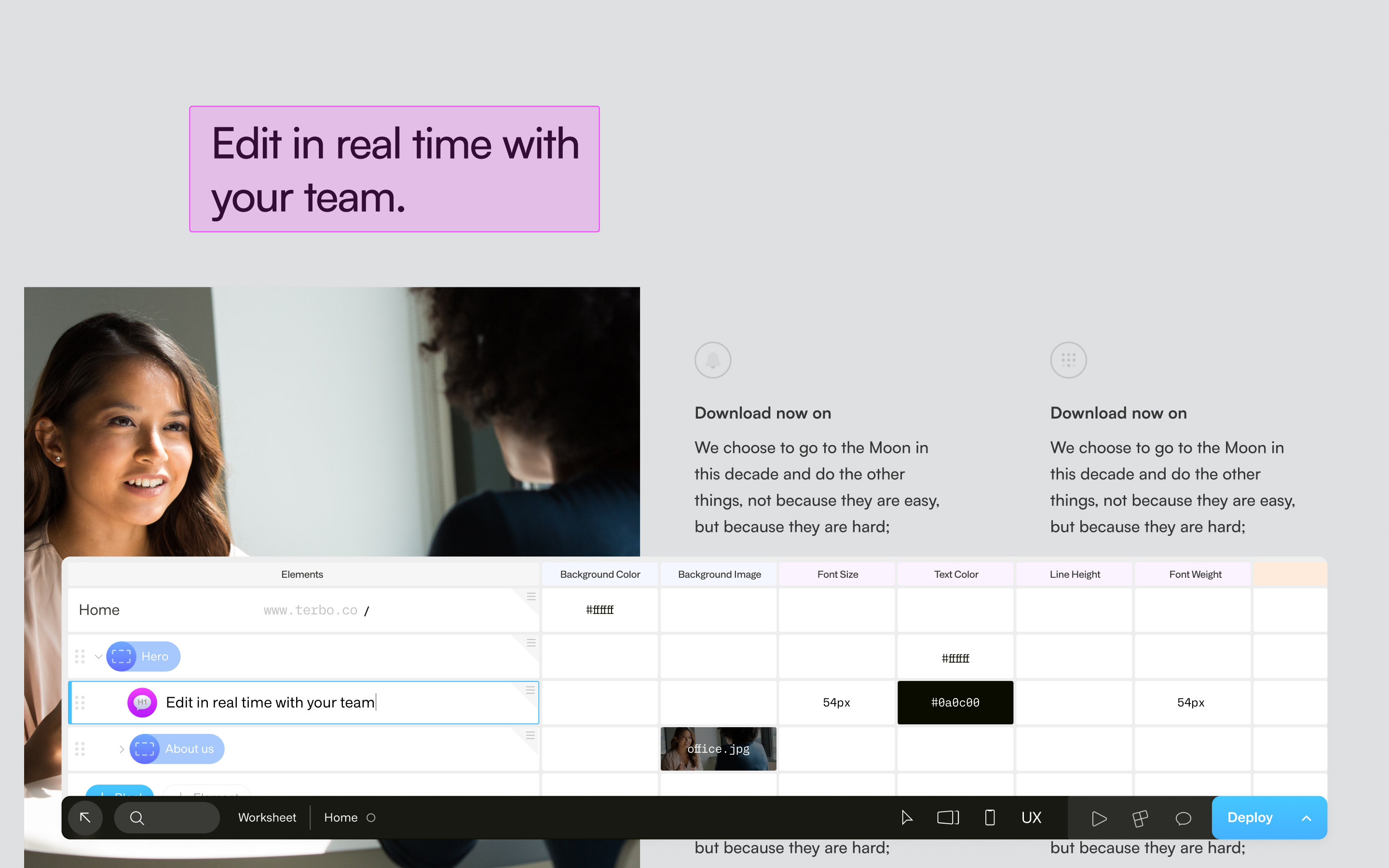 “The goal there is to make sure the people who are building the block are getting the most out of it,” Clarke said. “When we were an agency, we built all these incredible sites — and then they’d get used once and we never earn from them again. And there’s a lot of stuff that never made it out to the live sites — stuff that the customers said they didn’t really like, or maybe it didn’t make the cut. So it would be great to earn from that, over and over,” he added, speaking to the motivation behind making these reusable building blocks.

The site builder itself has an interesting design, too. It’s a floating window that sits in front of the website being created. But it’s a bit more advanced than some WYSIWYG designers, with sections for managing the sites’ pages, blocks and sheets (essentially, freeform databases). After you add the individual website elements, you can customize them further — updating fonts, colors, images, text and more, just as you could if you were writing or editing website code. You can also make changes by adding raw JavaScript or creating new elements from scratch.

As you work on the site, the changes you’re making happen live on the screen — you don’t have to click a “preview” to see what things will look like. And the elements you’ve customized can be shared back to the community marketplace, if you choose. 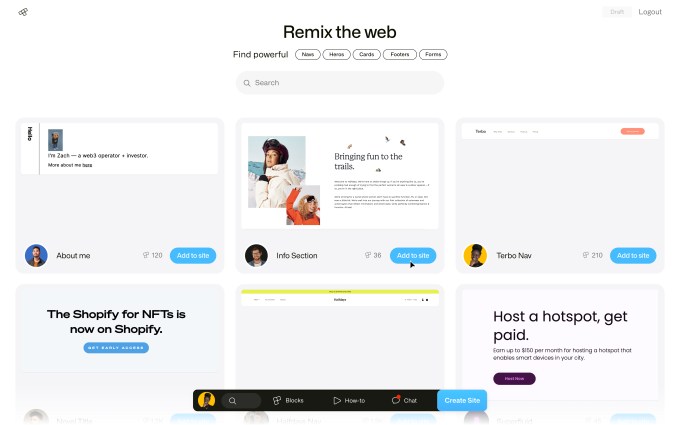 The marketplace allows The.com to capitalize on the creator economy trend, where people are rewarded directly for their work. The founders believe some of the top creators may even become “website influencers,” encouraging others to customize their own sites using their tools.

“In the marketplace, people will get more and more popular based on the quality and the great design and impressive building that they do,” Clarke noted. “What we see going forward is that people want credit for their work.” As the blocks get re-used, The.com will allow the original creator to get credit, including in the community and on the website.

Currently, The.com claims its community is in the thousands, in terms of customers, and has a couple of hundred daily active users.

The other notable element to The.com’s website builder is the collaborative element. Many of The.com’s customers are agencies or small businesses, as opposed to individual users. That means multiple people will be able to update the site together. Currently, the builder will display a profile icon next to the part each person is editing, but in the future, users will be able to edit side-by-side. There’s also a native chat feature so you can talk to other site collaborators directly about your build. 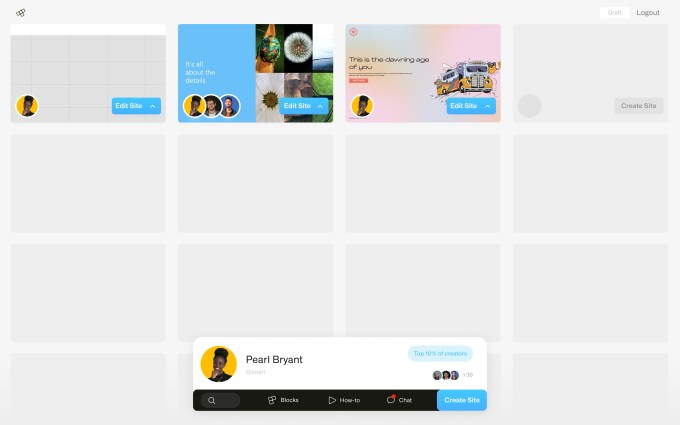 As the startup comes out of stealth, it’s also announcing its debut pricing plans. The basic plan, for those who want to kick the tires, is free. Other tiers are priced monthly at $36, $199 or $1,499 per month, depending on feature set, support needs and volume. The.com’s customers range from small businesses and startups to enterprises. At the higher end, some are using The.com on top of Shopify as a headless option, which increases their website speed and decreases their bounce rate, they found.

Though technically headquartered in San Francisco, The.com has a distributed team of 11 full-time employees, and a total of 15 working on the business. With their newly announced seed funding, they plan to hire in engineering and community, and work on further product development.

As for scoring such a coveted URL as The.com, the founders said a good friend helped them with the deal.

“It’s a friends-and-family discount. We’re lucky that this person was involved in the domain world for a long time and had access to a bunch of good stuff,” Clarke said, declining to share who the mentor may be.

“Unlike the Web 1.0 and 2.0 website building systems, The.com’s platform has network effects and composability,” said lead investor James Currier, General Partner at NFX. “It drives ownership to the creators and will allow creators to rebuild the web with new primitives. We’re long overdue for category innovation like this. If you’re still using WordPress to build websites today, you’re going to want to switch to The.com,” he added.

Update, 2/7/22: In materials originally shared with TechCrunch by The.com, the mid-tier pricing was listed as $190. It is actually $199; we have updated the article to reflect this.