While global tech and finance leaders have suggested that the world’s first trillionaire will be someone tackling climate change and that many climate unicorns are on the way, current VC levels are dwarfed by the mind-boggling funding amounts that are needed to give humanity a fighting chance.

As of October, climate-tech startups had raised over $32 billion in 2021 and, according to Dealroom and London & Co., U.S. VCs invested nearly $50 billion in climate-tech companies between 2020 and 2021. However, depending on whom you talk to, the climate finance gap currently sits at $2.5 trillion to 4.8 trillion.

To put this gap into perspective, total global VC funding (across all sectors, including climate) in 2021 was at an estimated $643 billion, and most countries in the world, aside from a handful, have a GDP under $4 trillion. Additionally, a sharp uptick in the number of climate funds and startups has some experts worrying about the potential of a bubble, and doubters may argue that traditional VC investment strategies are too risky to make a meaningful contribution to addressing climate change.

So where precisely do VCs factor into global efforts to address climate change? Indeed, a vast portion of the investments will be allocated toward infrastructure investments, as well as emergency funding, which will not yield venture-like returns. By the same token, new policies and national programs will be spearheaded by governments, and as conditions worsen in certain countries, foreign aid agencies will be crucial players.

Accordingly, we won’t be looking to VCs to write billion-dollar checks, create new policy incentives, or provide shelter and food to populations in need. However, VC funds and their investment strategies and networks have unique features that give them an important position in these global efforts.

Below we outline five key areas where we believe VCs can play a role in addressing climate change: 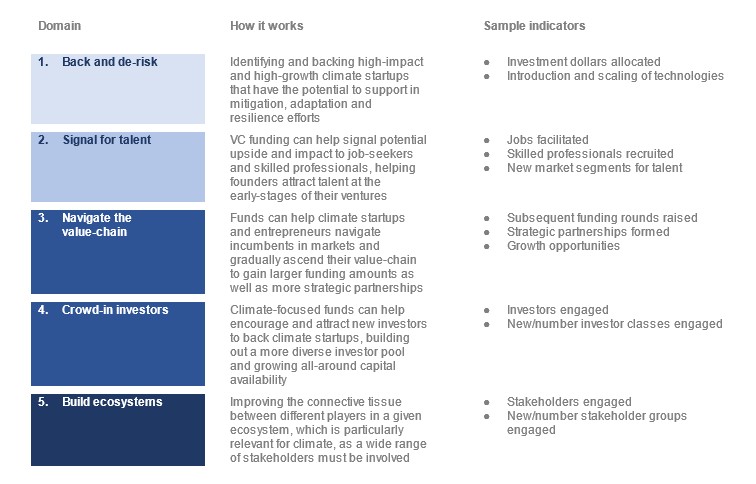 Venture capital has a vital role to play in de-risking climate technologies, which can help bring costs down, accelerate adoption rates and transform markets to enable a decarbonized future. Any hope of addressing the climate crisis requires helping entrepreneurs to mitigate technology risks and scale their innovations quickly and cost-effectively.