Multinationals like Amazon and Alibaba have leveraged logistics infrastructure such as UPS and FedEx to create large businesses. It’s not the same in Africa, where few third-party infrastructure players exist to provide end-to-end logistics to e-commerce companies.

PAPS, a Senegal-based logistics and delivery company, is filling this gap in its region by offering customers various logistics services. Today the company is announcing that it has raised a $4.5 million pre-Series A round to expand its tech-enabled logistics solution across the Francophone region.

Initially, PAPS operated a consumer-to-consumer logistics model. However, it immediately pivoted after noticing how infrequent and disorganized most requests were. It was hard to precisely predict the delivery flows in the space, which is different from the B2B model, where deliveries are planned.

The platform caters to small to large businesses, assisting them with their logistics needs, from storage and international transport to last-mile delivery.

PAPS also provides merchants with visibility features to track and know the status of deliveries from takeoff to the point of destination. Merchants can also schedule deliveries on the platform.

“When we launched PAPS, the first thing we wanted to give to our clients was visibility on their transactions, they had to know when the driver has picked their goods up, where the goods are during transit, and when it arrives,” Lo, the chief executive, told TechCrunch on a call. “So that’s what we are trying to do to build — an infrastructure that can serve all B2B clients from warehousing and dispatching to the last-mile delivery.” 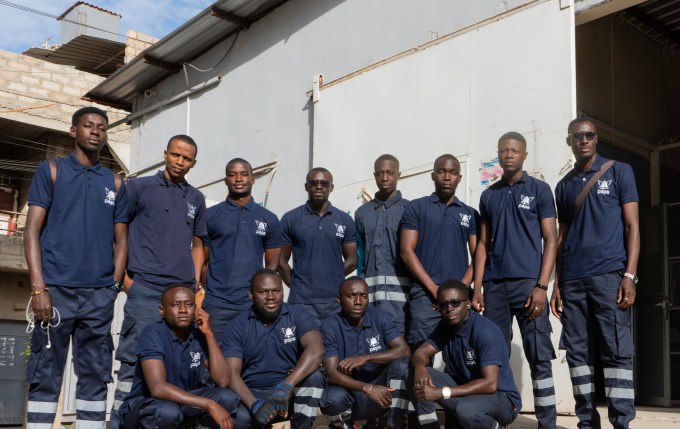 The Senegalese company owns the warehouses used to store clients’ goods and parcels. It also owns motorcycles, vans, cars and trucks to carry out inter- and intra-city logistics and deliveries. Additionally, the logistics company has a relay network of hubs close to its clients that act as delivery points.

The chief executive said that PAPS wants to create that infrastructure and an enabler for those businesses to access clients they cannot reach today because of logistics.

“The gap that we are filling is one that all these big corporations didn’t want it to address, which is the domestic market. No one addressed the domestic market except PAPS and that’s why we want to give quality and reliability,” he added.

PAPS clients span a range of industries, such as banking, telecommunications and pharmaceuticals (Lo said that the company currently handles distribution for 70% of all pharmacies in Senegal).

Major logistics players such as DHL and FedEx and consumer and business-focused e-commerce brands like Jumia, Glovo and Sokowatch also use PAPS for their operations in Senegal and Ivory Coast, the company said.

In a statement, PAPS claims to be the largest last-mile fleet in Senegal, making over 10 million deliveries across its two markets since inception. And according to Lo, the company’s delivery numbers are growing 150% year-on-year.

The company will use this pre-Series A round to strengthen its tech team, build out physical infrastructure to onboard more warehouses, hubs and fleets and extend its offering to more African companies.

Walter Baddoo, co-founder and general partner at 4DX Ventures, said in a statement, “We have been impressed with the Paps team’s execution thus far and their dedication to creating a truly innovative business in the logistics space. We believe technology has a critical role to play in modernizing Africa’s logistics infrastructure and we look forward to further partnering with Bamba and the paps team on this next phase of their growth”.