Instagram is giving creators more ways to make money with today’s launch of Instagram Subscriptions. The feature, which was spotted hitting the App Store back in November, is now officially in early testing with a small group of U.S. creators who will be able to offer their followers paid access to exclusive Instagram Live videos and Stories. Subscribers will also receive a special badge that will help them to stand out in the comments section and creators’ inboxes.

At launch, only 10 total U.S. creators have gained access to the new feature, as Instagram considers this an “alpha” test meant to allow for feedback from fans and creators alike, which it will then iterate upon.

Through the Subscriptions product, creators can choose their own price point for access to their exclusive content. There are eight price points to choose from, starting at $0.99 per to month to as much as $99.99 per month, depending on how much a creator believes their content is worth. Most creators will likely start toward the bottom of that range, at price points like $0.99, $1.99, $2.99, $4.99 or maybe even $9.99 per month, before experimenting with higher pricing like $19.99, $49.99 or $99.99 per month.

Once subscribed, users will be able to access prior subscriber-only content, like Stories saved as Highlights, for example. They’ll be alerted to exclusive broadcasts, where they’ll be able to engage more deeply with the creators as the viewing audience will be, naturally, smaller. In subscriber-only Stories, indicated with a purple ring, creators may share things like behind-the-scenes content, special polls and more. Subscriber badges, also purple, will help fans stand out in the comments of public content, and will help them to be identified in creators’ message request folders in the inbox. 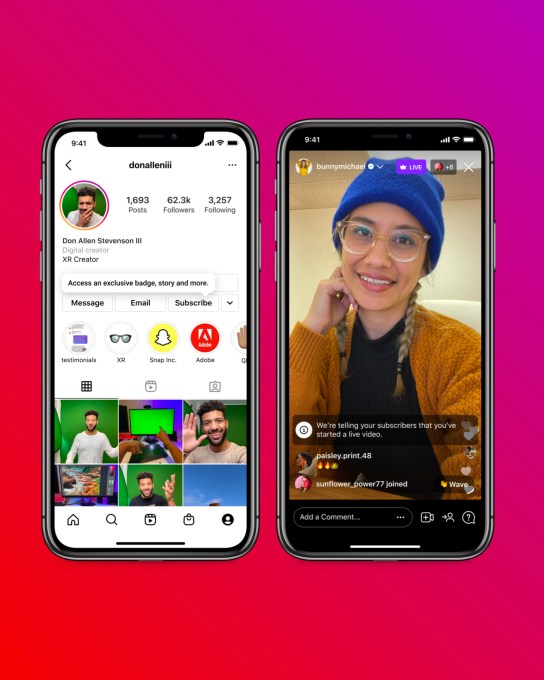 Although there had been reports that Instagram was developing technology that would prevent creators’ exclusive content from being screenshot, Instagram told us there isn’t any such technology available during this initial test phase. However, resharing the content is a violation of its terms and creators are being encouraged to report anyone screenshotting or recording their content.

There’s also no dedicated section for Subscriptions in creators’ analytics dashboards during the early tests. But creators will be able to access their total estimated earnings from subscriptions, total subscribers, new subscriptions and cancellations from their Subscriptions Settings. They aren’t able to export subscriber lists, or any sort of data, but Instagram says it hopes to build tools that would allow creators to connect with subscribers “off-platform” in the future.

For fans, signing up for a subscription to their favorite creators’ content takes place via traditional in-app purchases across iOS and Android. And for now, Instagram is not taking a cut of the creators’ revenues.

“We are the same as all of Meta — we’re not taking any rev share until at least 2023,” noted Instagram co-head of Product, Ashley Yuki. “Our main goal here is that we help creators make a living…We’re trying to think of all the ways that we can build monetization products where that’s possible.”

Of course, Instagram isn’t just trying to help creators make a living. It’s also trying to shore up its platform against the threat of competition, namely from TikTok, which has attracted a growing number of creators looking to reach a younger, Gen Z following. It’s also seen other large tech rivals, like YouTube and Snapchat, try to appeal to TikTok users with similar short-form video products, like Instagram’s TikTok clone called Reels. Meanwhile, even Twitter has launched its own creator initiative with its Super Follow platform, and numerous startups are working on services that allow creators to consolidate, track and monetize their following in new ways.

The activity in this space is a reflection of the size of the market. The creator economy is estimated to be a little over $100 billion dollars, and growing. Even if Instagram (and Facebook) defer collecting their cut of creator transactions for a year, Meta sees it as a small investment in ensuring a larger piece of that pie going forward.

Despite the competitive landscape, Instagram believes its strength will come from the fact that it’s not a new product.

“One of the biggest differentiators here for creators and for fans is just the convenience of the fact that you actually know how to use all these things already. You’re already on Instagram. And we hear a lot [about] the friction of having to do the ‘click out.’ It might seem like a small thing. But in those moments, it can be the difference between having someone jump over your subscription or not,” explained Yuki. “The convenience of just having it all where the conversation and connection is already happening, we think is going to be one of the strongest points of this for both creators and for fans,” she said.

In time, it seems likely that Facebook and Instagram Subscriptions could merge. If that came to be, fans would also be able to sign up on Facebook or Instagram — including via the websites, where no App Store commissions would need to be paid. And those subscriptions could carry over to the respective mobile apps. Yuki didn’t discount the idea, when asked.

“In this alpha, that’s not implemented yet. But that’s something that we could definitely consider for the future,” she said.

Meta CEO Mark Zuckerberg also touted the launch on his Facebook profile today, noting Subscriptions would “help creators earn more by offering benefits to their most engaged followers like access to exclusive Lives and Stories.

“I’m excited to keep building tools for creators to make a living doing creative work and to put these tools in more creators’ hands soon,” he wrote.