The pandemic hasn’t been easy for anyone, but the food service industry has been hit particularly hard. More than 90,000 restaurants and bars have closed, leaving workers unemployed in an already precarious industry. And those who kept their jobs faced the stressful demands of customer-facing work in a pandemic.

In response to the changed industry landscape, food service veterans are launching their own businesses, whether they’re delivering take-out meals in their neighborhood or mailing cans of kombucha around the country. “People tell them that they make great cakes, or that their sourdough is better than everybody else’s, or their hot sauce is amazing,” explained Castiron founder and CEO Mark Josephson. “And they dream of selling and building a business, but they end up spending 75% of their time on things other than what they’re good at.” He’s talking about everything that isn’t cooking: building a website, keeping track of finances and other administrative tasks.

So, he created Castiron, an e-commerce solution for independent chefs. Today, Castiron announced a $6 million seed funding round from Bowery Capital, Foundry Group and High Alpha. A veteran of the tech industry, Josephson is a three-time CEO — he previously helmed outside.in, which sold to AOL, later leading Bit.ly for seven years — but Castiron is the first company he’s founded. 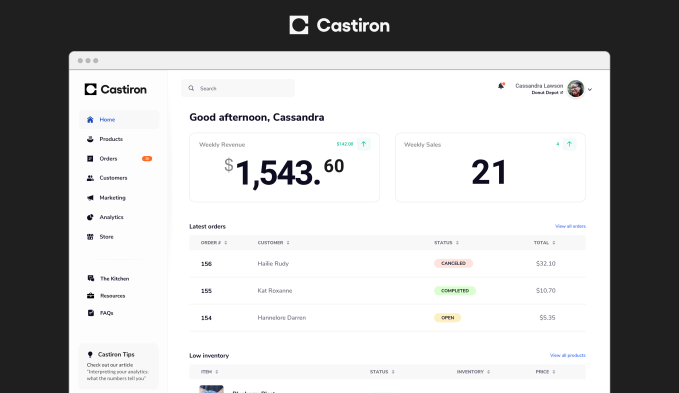 Right now, Castiron only operates in the United States, where laws pertaining to home food businesses (cottage food laws) vary from state to state. But given the increasing rate of unemployment since the onset of the pandemic, many states have made it easier to legally run independent food businesses. Currently, Josephson estimates that about 40% of Castiron’s users run local delivery businesses, 40% sell products for pickup and 20% ship their goods. He said that “several hundred” users have set up shop on Castiron, but that this seed round will help fund a hiring push to scale the business.

“This push of entrepreneurs who are building small businesses is a huge part of our economy going forward,” Josephson noted. “I’ve been in media, digital media, software marketing, and there’s nothing like this. And like, honestly, I have boxes of chocolate chip cookies, and roasted coffee beans, and biscotti, and sourdough, and hot sauce showing up at my house. It’s like, what’s what’s wrong with that? What could be better?”