European startups collectively raised a record $100 billion+ in funding in 2021, a sign of their swelling ranks, ambitions and stature. Now, a VC in London has closed a record round of funding to cater specifically to that opportunity. Blossom Capital, which makes investments in European startups at the Series A stage, has raised $432 million in its third fund, from a mix of limited partners that span Europe and the U.S. At $432 million, it’s the largest fund to date focused on European startups’ Series A rounds, Blossom said.

(Note: Balderton closed a $600 million round for “early stage” investments last year, so this I guess gives Blossom room to claim to be the biggest to focus on Series A alone.)

Founded by Ophelia Brown, formerly of Index Ventures and Local Globe, Blossom’s growth has mirrored that of the startup landscape in Europe.

For years, all the action happened in Silicon Valley — so much so that even when startups were hatched in Europe, the U.S. is where they went to find traction and grow, raise serious money and hire talent. VCs based there often even mandated startups move to the U.S., and specifically the Bay Area, as a condition of funding.

But over time, the Valley became more expensive and competitive. So both founders and investors — armed with ever more money from LPs keen to reap the rewards of a rapidly-growing tech industry — have started to do business further afield. That trend was given a big fillip in the wake of COVID-19, which shifted perceptions on where and how we should work. Now, the Valley VCs are opening and funding operations here to meet the opportunity.

If one of the best attributes of a venture capitalist is that he or she can spot (and then fund) a trend early on, it’s a pretty strong vote of confidence that Blossom was very prescient in identifying how things would evolve for startups in Europe.

“We launched back in 2018 thinking there was a gap in Series A funding,” Brown said. “Now we see that opportunity set growing each year, and not just in London, Paris and Berlin, but a lot of other cities in Europe.”

In keeping with that, so too have the size of rounds grown here.

A decade ago, it was not uncommon for a Series A for a European startup to be less than $5 million. But in 2021, the median size started to push $10 million, and is often much, much higher than this. Of course, this is still being outpaced by rounds in the U.S., where the median Series A in 2021 was $13 million, but again can be much higher than this. (And I’m willing to bet that as we see more successful exits, major growth milestones and skyrocketing valuations come around the corner, Series A rounds across the different regions will converge to be level with each other.)

Blossom has to date been a generalist VC, investing in a pretty diverse range of startups that have included instant delivery startup Dija (acquired by Gopuff last year); payments specialist Checkout.com (which last week announced a $450 million round that valued it at $15 billion); business forecasting specialist Pigment; and cybersecurity, messaging and video startups, and more.

This latest fund will mostly follow the same course, save for one very notable exception: one-third of it has been earmarked specifically for cryptocurrency startups.

It’s an area where Brown said she and the firm were interested early on — she said she personally bought her first bitcoin back in 2012 — and despite some of the speculation and volatility that have been hallmarks of the cyrpto market, she remains optimistic that there will be some significant companies emerging out of that in the longer term.

MoonPay, a platform that lets people buy and sell cryptocurrency using fiat currency, is the firm’s first big investment in the space: It was part of the startup’s eye-watering $555 million Series A in November last year (as we said, these rounds were sometimes significantly higher than $10 million).

Going forward, managing partner Alex Lim (who joined Blossom recently from IVP) said that the firm wants to do more in crypto infrastructure, web3 and protocols, and more consumer services.

“Our focus is to invest early,” he said. “It’s not just a bubble. There are markets being created here.” 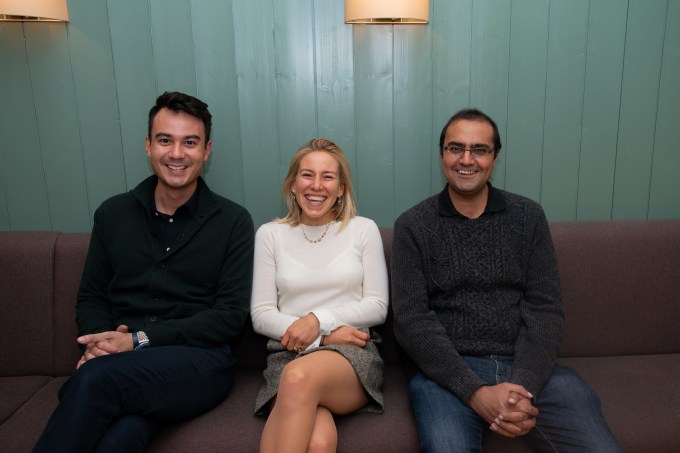 It’s notable that Blossom was founded and is led by a woman (Imran Ghory, the third partner, is pictured above right, with Lim and Brown). Females remain a rarity in venture capital, especially in Europe. Brown said that diversity is a significant factor for Blossom, but its approach is to work with portfolio companies to bring more diversity into their ranks, rather than use that as part of the overall investment thesis.

“We don’t think about diversity in terms of [our investment] agenda but in terms of how do they think about building that into their team or products, or addressing it with customers,” she said.

It will be interesting to see how the influx of yet more capital will impact how startups in Europe grow over the longer term, not just how they scale but whether that impacts their exit prospects, too. It was not that long ago that a promising startup in Europe most often took one of two routes: move to the U.S. to grow, or get acquired.

“When we invest in a company, we assume it’s a standalone business for the longer term, and I think the chances of that have now significantly increased,” Brown said. “Selling a company for more than $250 million was practically impossible 10 years ago. Now startups have a lot more options.”