As competition amid digital banks heats up, U.S. fintech Current is rolling out a new product designed to make its banking service more appealing. The company announced this morning it’s launching a new high-yield offering called “Interest” that allows any Current account holder to earn a 4.00% Annual Percentage Yield (APY) — a rate that’s 60x higher than the national average, it notes.

The Interest offering will be made available to all Current users, including those on Current’s free Basic plan as well as Premium users who pay to access upgraded features. (The latter group also likely helps Current be able to afford to boost its APY, in fact, as Premium subscribers pay $4.99 per month for Current’s expanded service.)

While it’s common for neobanks to offer a higher APY than traditional banks, many banking services require users to jump through hoops to reach the higher rate. For example, One Finance offers a 1.00% APY in its “Save” product on funds up to $5,000, but to get its higher 3.00% rate, you have to set up the auto-savings feature. Aspiration and Varo also offer a 3.00% APY, but have their own requirements around spending, balances, total direct deposits and more.

Current’s new offering, however, pays out on funds up to a total of $6,000 annually, the company says. It also notes there is no minimum balance required and no direct deposit or spending requirement. However, what makes its product different is that all members will be able to earn interest on their funds on a daily basis. (Typically, banks pay the interest monthly.)

Plus, the catch on Current’s product is that the $6,000 total has to be spread across its Savings Pods. So the APY is earned on up to $2,000 per pod. That makes it more of a viable choice for customers just starting to save and who want to organize their money into different groupings, rather than someone looking to park a larger balance. (Free users can only create one Savings Pod, as well, while subscription users can create three.) 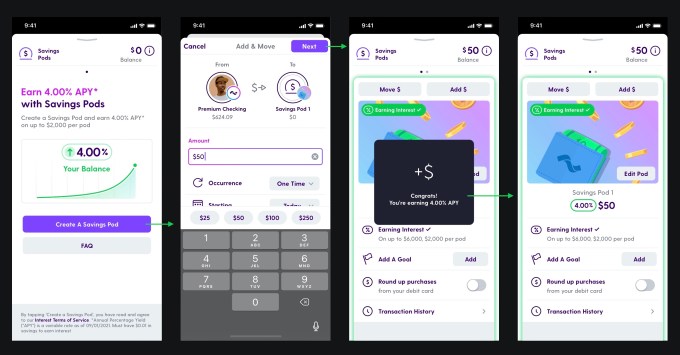 Current tells TechCrunch it’s not introducing this high-yield product at a higher rate which it aims to bring down later, over time.

“We’re not approaching this as a promotional rate,” explains Current VP of Product, Josh Stephens. “We’re approaching it as something that’s available for all for the foreseeable future…I think, certainly, you see promotional rates from other folks out there with a lot of bells and whistles attached to it. But this is something that’s available for anyone, with no balance minimum, no fees,” he says.

The company also sees the rate as a way to better promote its banking service in a crowded landscape. Current, which got its start as a teen banking service, expanded over the years to offer a more competitive product for adults — including those without kids. Like many digital banking services, Current offers perks like fee-free overdrafts, cashback, fee-free ATMs, faster direct deposits, automated savings, money management tools and more. With Interest’s launch, it’s now responding to customer demands for better savings products, as well.

“Inflation has been rising at one of the highest rates in 40 years over the last couple of months. [The Consumer Price Index] has been rising at the fastest pace since the early 80s,” says Stephens. “And for our members — and for a lot of Americans — this meant their money just isn’t going as far as they need. That means they’re paying more for the same goods and services. It’s making it harder to put money aside.”

Meanwhile, Current believes the existing options on the market make it difficult for banking customers to meaningfully grow their money.

The change could encourage some banking customers who have their funds parked in savings elsewhere to move over to Current’s service instead. Over time, they may upgrade to premium Current products and services, making the higher APY worth it from a business perspective.

Today, Current has more than 3 million members, free and paid, with an average age of 27 among its member base — younger than many competitors.

Longer-term, the company plans to roll out more offerings to help these customers further grow their money. It’s planning to enter the crypto space, having last year announced a partnership with Acala to create a new category of “hybrid finance” which will combine the benefits of traditional banking and decentralized finance. Consumer lending is also on its roadmap.

Current’s new Interest product will begin to roll out today across iOS and Android.

“Current is taking the path of offering a much higher-than-average interest rate, but there are strings attached. Consumers can earn 4% on up to $2,000 for three different “Savings Pod” subaccounts, which means they could earn up to $240 in interest per year if they meet all of the balance maximums,” Bessette said. “It’s important, however, to take note of the $4.99 monthly fee for the Premium Account that lets you add those extra Savings Pods. This fee ends up being close to $60 per year, so in order to make the fee-versus-interest math work out, you’ll want to earn more interest than you pay in fees. We typically don’t like to recommend accounts that have monthly fees, but in the case of Current, it seems like consumers can cancel out the fee and earn quite a bit of extra cash as long as they keep their account balances high,” she added.

Updated, 1/13/21 after publication with NerdWallet insights.